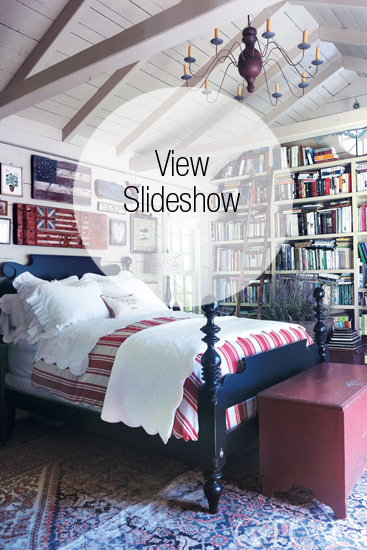 Nora Murphy is in a country state of mind. The founder of Connecticut Country House, a venture that encompasses an online magazine and blog about all things country, her dedication goes way beyond milk paints and Americana crafts. Instead, the former executive vice president of style at Ethan Allen has built a business and a lifestyle around embracing the concept of the country house. Traditionally used only on weekends, Murphy wondered, “Why not create a country house for everyday living?” With her husband, son, and a dog and a cat in tow, she did exactly that.

A Fairfield County native, Murphy knew at a very young age how she wanted to live. “My mother worked for a socialite with an 18th-century house in Southport, and she would take me there with her on weekends,” says Murphy, who recalls being enraptured with everything from the Windsor chairs strewn around the requisite gathering table to the roaring fires in the oversized hearths. “Even at age five I was hooked.”

Then, almost 14 years ago, she spied a for-sale sign in front of a classic saltbox she’d had her eye on. “I drove by that house at least once a week for years, and each time I would slow down for another look,” says Murphy, who wasted no time contacting the Realtor. Once inside, what started as a curbside love affair quickly morphed into whole-house desire as she took in the thoughtfully crafted 18th-century architecture and sun-filled rooms. “It was likely built by a poor farmer, and there was an honesty and simplicity that was undeniable,” she says.

After convincing her husband, who ultimately found the cooking hearth in the dining room, authentic woodwork and property nestled in a hollow equally enticing, Murphy was ready to make it hers. Among the first changes was painting a checkerboard over the pegged-oak kitchen floor installed by the previous owner. “The tobacco green and cream colored pattern looks like it’s a hundred years old,” says Murphy, who also added wide beadboard walls to the space.

After culling items from her previous residence, a Tudor cottage filled with tartans and rose linen fabrics, she placed things where they worked and filled in as needed. A hand-painted French cupboard (“The first thing we bought when we were married,” she says) became the kitchen pantry. A corner cupboard once lined with English china received a coat of gray-green paint and has become the display space for shells and other natural curiosities collected by the family over the years.

And decades later, with the memory of the Southport socialite’s gathering table still fresh in her mind, Murphy purchased a 10-foot-long, late 19th-century farmhouse table as the dining room centerpiece. Along with an 18th-century bench and a primitive cornmeal chest, it is as simplistically elegant as the house itself.

If the house had a major drawback, it was the lack of a suitable master suite. Of the home’s three second-floor bedrooms, described by Murphy as “tiny, tiny and the least tiny,” only one could accommodate a queen-sized bed, and just barely. “We knew we needed a master suite but a new structure didn’t seem right,” she says. “We needed something with architectural integrity.”

A Google search for “dismantled antique buildings” led to a business that takes down old barns, which in turn led to an 1857 chicken coop and its original brick foundation being transported on two trailers with a state trooper escort to its new home. Somehow Murphy saw past the blown-out windows and lack of a floor to envision a white-paneled room with a cathedral ceiling and built-in bookcases, plus space that could handily accommodate a bed of any size.

The country house concept also has an outdoor component, and in Murphy’s case, rose, perennial and kitchen gardens beckon through a variety of doorways. On a summer day, Adirondack chairs placed under an ancient maple are nearly irresistible, and year round, bouquets or cut branches can be found on that gathering table. “Everything here is about creating an environment where people can feel comfortable and happy, not just on weekends but every day,” says Murphy.

A version of this article appeared in the November 2015 issue of Connecticut Cottages & Gardens with the headline: Everyday Country.