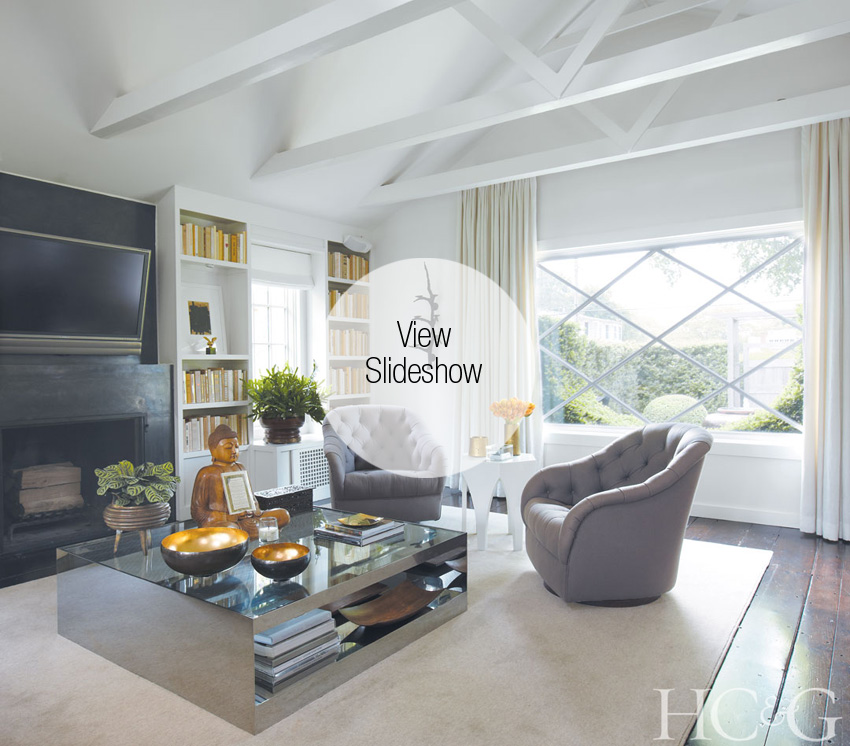 What would you do if you were a landscape designer transforming a neglected property in Sag Harbor’s historic district, only to find out that the place was suddenly on the market? If you were Joseph Cornetta, of Joseph Cornetta Designs, you’d buy it yourself— despite the diminutive lot size (just 60 by 100 feet) and a wreck of a house its brave new owner describes as “Grey Gardens gone bad—only worse.”

Having already begun the outdoor work, Cornetta kept plugging away, adding a plunge pool/spa, installing a new fence and gates, laying a bluestone path, raising beds edged with Pennsylvania wall stone and making a fountain from an 18thcentury Chinese pot. He replaced the front lawn with Delaware blend pea gravel, which he also used for the driveway, part of which has been given over to a boxwood topiary garden. He pleached hornbeams, sculpted ilex hedges and planted Ligularia, hostas, beech trees, firs, cedars, lodgepole pines and little hedgehog clumps of dwarf grasses. Within three months, he says, “80 percent” of the garden was complete.

His design combines stately old-world formality with whimsical juxtapositions of plants, contemporary asymmetry, a deeply felt serenity and enough points of visual focus to keep even a black thumb’s eye engaged. “I wanted an architectural garden,” Cornetta says, “with defined outdoor rooms and lots of little moments for discovery.” Because he desired beauty year-round, he opted for a green-on-green scheme provided by (mostly) nondeciduous plantings. There are few flowers in this plan; instead, Cornetta worked with textural variations and colors that range from bright chartreuse to dark forest green, silvery blue and deep earthy red.

As almost everything outdoors has been shaped by human hands, so it has indoors, where the designer moved “just about every wall” to create a contemporary living space from a house that had been built as a garage. Moved from its original Main Street location in the 1950s, the garage part of Cornetta’s house is now the cozy 400-square-foot living room. Cornetta refinished the “pumpkin-colored” floors, replaced the brick fireplace with a burnished bronzed-steel update, added a dining room and deck, gutted the kitchen, paneled the bedrooms in V-groove board and then painted the entire interior— floors, ceilings, walls and trim— with Benjamin Moore’s China White. He also changed out all the windows, finding a vintage replacement for the living room’s cottage window in West Hollywood. What started out as a humble garage was fully transformed into a 1,500-square-foot, three-bedroom, two-story charmer.

Ed Ruscha relief print that hangs behind the living room sofa. It set his color palette, which runs to the neutral and the natural—as do his textile choices: wool, silk and linen. Cornetta designed some of the pieces himself (“In order to get exactly what I wanted”) and bought others from well-known purveyors like Knoll (the Warren Platner dining table) and Niedermaier (the Vicente Wolf bed in the master suite), as well as such auction houses as Sotheby’s and retail outlets that range from chain stores like West Elm to up-market home decorating shops like JED in Sag Harbor.

He also incorporated wood and metal accessories that range from a mirrored Joe D’Urso coffee table to chrome Mies van der Rohe dining chairs. But he’s fond of patina, too: On the aged copper-clad table in the mirrored entry, for example, several bronzes from his travels in Asia are on display, along with stone statuary and antique ceramics.

And now that the place is finished? “I love living in nature, indoors and out,” says Cornetta. “I feel a deep satisfaction from having created this place from basically nothing. And everyone who comes here seems to love it, even if they don’t share my particular taste. It’s really very gratifying.”

A version of this article appeared in the August 1 2011 issue of HC&G (Hamptons Cottages & Gardens) with the headline: Sweet Serenity.

15 Best Furnishings for a Simple and Natural Design