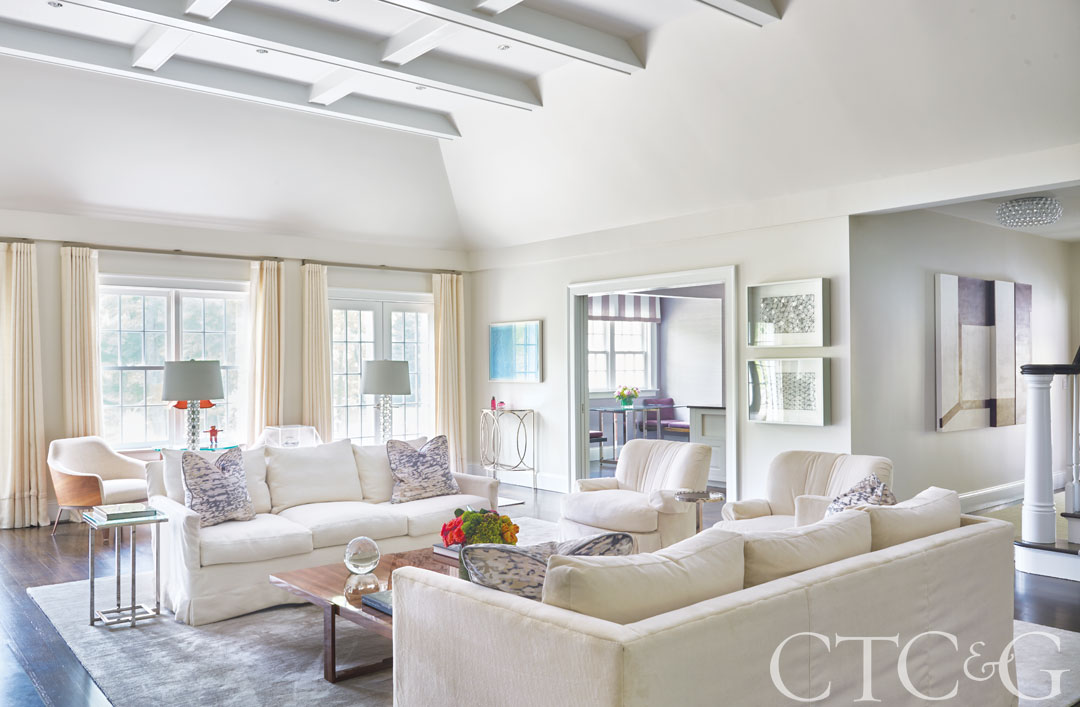 Only 15 years old and renovated just a year and a half ago by its current owners (an education administrator and a former magazine editor with an allegiance to her homeland of Brazil), this 3,000-square-foot house fits into a landscape where shuttered clapboards huddle close to the road and church steeples soar from every corner. While it complements the vernacular of Connecticut’s northwest corner, there’s something different about this home. Both inside and out, the house—evocative of a 21st-century barn with crisp edges painted wake-up white—represents a couple in transition. It’s the effect of a subtle gravitational pull toward the modern end of the design spectrum and away from the more traditional aesthetic of the home they occupied for more than 20 years nearly two hours south in Greenwich.

The shift was every bit their intention. To realize their vision, the couple tapped architect Bob Tucker of Huestis Tucker Architects in Woodbridge and interior designer Marcia Tucker of Marcia Tucker Interiors in Greenwich. (The Tuckers are not only unrelated, they did not meet until the project was photographed.)

The project had a two-fold objective: Facilitate movement through the house and lighten up the architectural details, which for the previous owners had served as a backdrop for a magazine-worthy Americana collection. And then there was the request for a master bedroom on the first floor and a second-floor domain for two sons away at school. 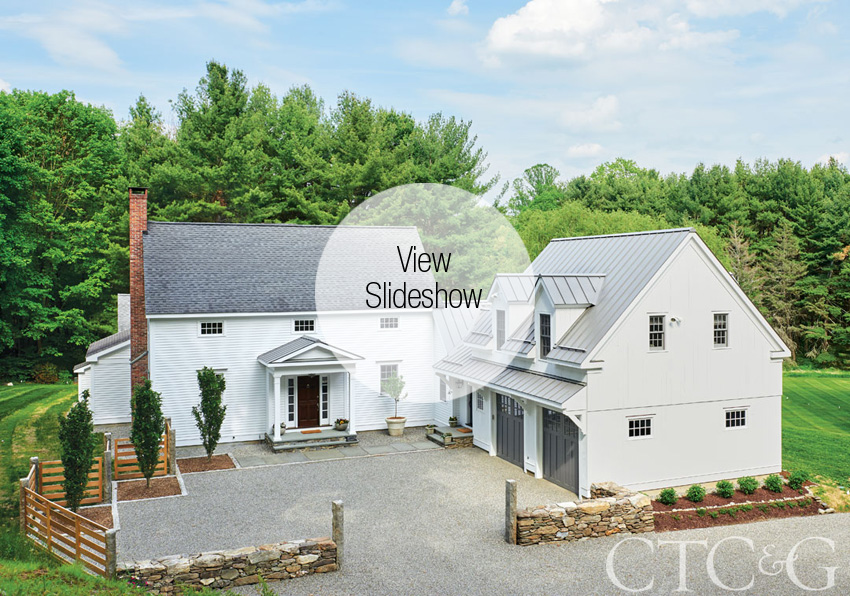 Bob Tucker facilitated flow by pushing out the façade to expand the foyer. Then he extended the porch and portico. The result is a space in which guests can be greeted and coats removed. He also punched a hole through the rear end of the dining room, creating a doorway that admits light from the sunny living room beyond while enabling diners to retire to the comfort of sofas and a fireplace after a feast. A sunroom adjacent to the living room was converted into a library, and in the living room, Tucker stripped down the deep coffers on the roughly 12-foot ceiling. Heavy millwork was removed throughout, and perhaps in his most dramatic flourish of all, Tucker designed a whitewashed wall of paneling reminiscent of a Downton Abbey drawing room (the client’s idea).

The open and airy ambiance sets the stage for the real star of the house, which is the art, a feature on which the Brazilian client and her Brazilian    interior designer formed a bond of mutual appreciation. “I learned a lot about art from this project,” notes [Marcia] Tucker of the collection that includes works by many luminaries on the South American art scene. “I saw the importance of letting it be center stage.”

She kept the furnishings, color palette neutral in order to allow “the art to pop.” Among the standouts in a collection saturated with color are the gloppy brush strokes of Gabriela Machado; the cheekiness of a Vik Muniz riff on an Old Masters portrait; and the precision of a geometric graphite sculpture by a Venezuelan artist. Mounted above the fireplace is a Lucite-framed curtain of porcelain shells that draws the eye and adds a fluid dimension to the wall. Glossy photography by Claudia Jaguaribe and Valdir Cruz gives the space a chic shimmer. One piece blends distinct frames of Rio de Janeiro’s most well known images into an impossibly compressed view of the city, while another features indigenous Yanomami boys on a hunt in the forest.

Marcia Tucker’s biggest challenge was incorporating existing furniture into the new scheme. Among other items, the couple already owned demi-lune tables and a dining room set with dainty chairs that could have been made by Shakers. The designer sourced complementary pieces from Brazil and elsewhere; they include a low-slung square coffee table possessed of a tropical, modern silhouette; cushions for a cleverly conceived breakfast nook; and a deep-seated sofa that matches one already included in her clients’ repertoire. Then, to warm things up, she chose finishing touches such as translucent draperies and wallcoverings like the enveloping blue suede that lines the library and taupe-ish linen of the dining room.

Concludes [Bob] Tucker, “With a few relatively small moves, we were able to change the character of the house and make it work for a new owner.”

A version of this article appeared in the January 2017 issue of CTC&G (Connecticut Cottages & Gardens) with the headline: Getting In Character.