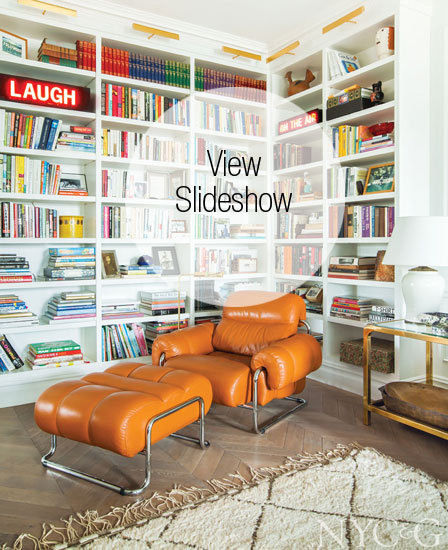 It began innocently enough. Barnaby Harris paid a visit to friends in the Lower East Side building where he worked one day, excited to tell them about the apartment that he and his wife, Suzie Kondi, had just bought in the East Village. He also wanted to ask for some advice. Those friends, decorators Gregory Dufner and Daniel Heighes Wismer, had previously helped him design his office, so a level of familiarity and trust had already been established. “Barnaby told us that the apartment hadn’t been touched in 50 years, and that it just needed to be cleaned up and repainted,” recalls Dufner. “He had a contractor lined up to do the work, which included adding a new floor and taking down a wall, and just needed a survey and drawings.”

Simple enough—at first. Like Harris and Kondi, Dufner and Heighes Wismer were seduced by the space, not to mention the building—a 1928 Art Deco gem with a marble lobby, complete with a fireplace, that looks more Upper East Side than East Village. At 1,200 square feet, the two-bedroom, one-bath apartment had windows galore with unobstructed views facing north and west, and it was located in a line that Harris, who had lived in the building since 2002, had long had his eye on. But except for minor repairs, it truly hadn’t been touched in half a century, so suddenly the notion of “putting in a new floor” evolved into a total gut reno. “Did you know they used to fill floor cavities with ash?” says Dufner, recalling just one of the random surprises that awaited them during the overhaul. “It was crazy. But we knew we could turn the place into something quite nice.”

As the work went on, Harris and Kondi continued to live just two floors below with their then two-year-old daughter, Stevie, and Miniature Labradoodle. Their mandate was to “keep or re-create as much of the original detail as possible, while developing a more contemporary, free-flowing space,” Kondi says, adding that “it wasn’t the plan that turned out differently; it’s the scale that did. At one point our contractor compared it to the movie The Money Pit, which was not comforting! Although I don’t think it was quite that bad.”

“The romantic idea of simply whitewashing existing moldings and interior prewar details, refinishing the floor, and installing modern furniture just wasn’t realistic, since we were taking down walls, replacing the floor, rethinking the master bathroom, adding a powder room, and resolving some awkward spaces,” explains Dufner. It helped that the clients, who design a line of athleisure clothing called It’s a Sickness, and their decorators share similar sensibilities in taste and style. (Harris famously designed a T-shirt with the phrase “Fuck Frank Gehry” on it, landing him a write-up in The New Yorker; oddly enough, Gehry’s daughter is moving into the penthouse unit just one floor above.) Harris and Kondi planned on bringing much of their existing furniture to the new place, and Kondi, who routinely dog-ears magazine pages for inspiration, was active in sourcing new pieces. But the one thing the couple—both renovation novices—had not accounted for was lead times. “I thought 30 weeks for the new floor was a random number, and that it would probably come in at 20,” Harris recounts. “But it’s not random, it’s real.”

Still, the project was completed within nine months, despite the waiting time, changes that added to the waiting time, a hurricane named Sandy, and European suppliers who closed for vacation during August. Kondi got the sparkling Bulthaup kitchen she had hoped for, which she describes as “dreamy and smart.” The new floor looks seamless, and it’s virtually impossible to tell that the elaborate moldings and architectural details have been completely refabricated. Perhaps most important is that the couple “survived the experience with our relationship intact,” Harris says. “And I got the TV I wanted.”

A version of this article appeared in the March 2016 issue of NYC&G (New York Cottages & Gardens) with the headline: Movin' On Up.