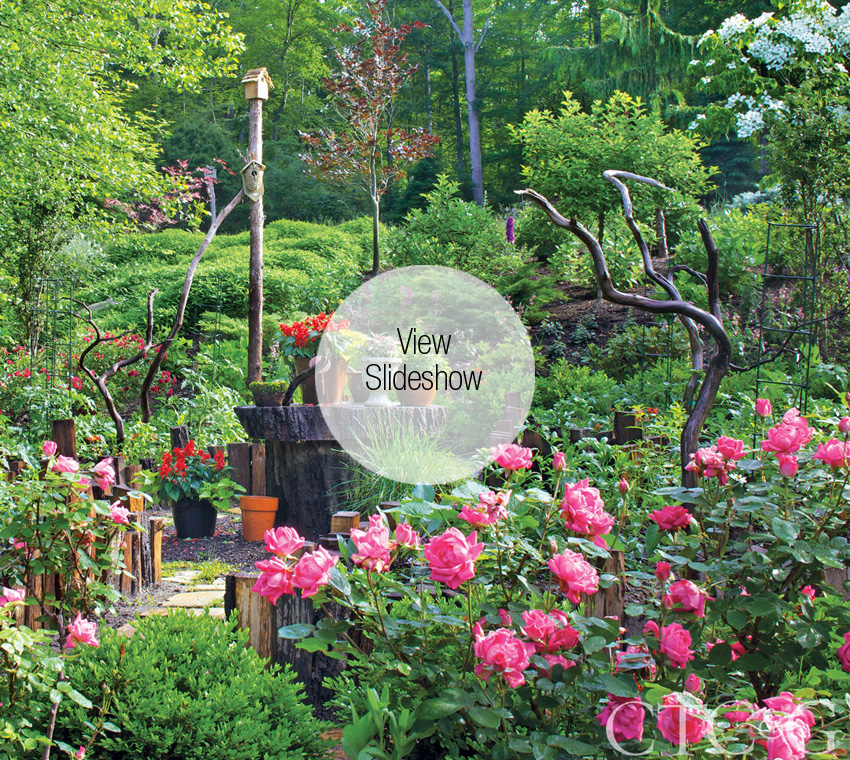 When visitors arrive at John and Kimberly Conte’s Greenwich home, Amelia is likely to greet them. She is known to be talkative, even pushy, and rarely stands still. She can be found wandering in her speckled coat everywhere on the wooded five acres—from the circular stone gazebo to the banks of a babbling creek, gazing over the frog pond from an Adirondack chair or admiring the riot of colors in the cutting garden.

“We named her Amelia Earhart, after the famous pilot, since she loves to wander on her own,” says Kimberly Conte, of one of the pet chickens she and her husband keep. Other favorites of the some dozen chickens that live on the property of the husband-and-wife landscape design team who head their Bedford, New York, and Greenwich–based Conte & Conte, include Nana, known for her maternal instincts, and Phoenix, with a crown atop her head. Apart from the clucking flock that lives in an architecturally distinctive stone coop, evocative, as John says, of rustic Adirondack structures, the Contes have fashioned a world that feels much farther from downtown Greenwich than a mere 10 minutes.

When the Contes purchased the property in 2007, they spent a year reworking the land. “Then, when you walked down the driveway and looked up, all you saw was a canopy of trees, with not a patch of blue sky,” says John. While much of the spread remains heavily wooded, the necessity for a new septic system on level land led to the eventual clearing of an acre-and-a-half of garden areas. Prior to that, the land was dense and dark with growth. “Our first spring here,” says John, “we’d drive through Greenwich and see the flowering trees. But when we came back here, everything was brown. The hardwoods don’t bud out until May and, so, we faced a monochromatic vista of woods, which were still beautiful, but not colorful. We wanted to establish some color and texture.”

What the couple now characterizes as a woodland garden is defined by intriguing built and natural elements, as well as virtual outdoor rooms of flowers and vegetables. Evergreens, including hemlocks and hollies, were planted to bring green to the property in winter, much of which is visible from the A-frame-style house. John ingeniously used fallen cedar and black locust branches, gathered from this and the couple’s other property, to build the chicken coop. “I also anchored the limbs on concrete bases to which I hinged birdhouses,” says John. “One friend asked, ‘When are you going to remove those dead trees,’ but I said, ‘I’m not, I’m planting more dead trees.’”

John emphasizes that local materials are important to him when making a garden. “I try to recycle and reuse natural elements.” For example, he used stones gathered from the property to fashion a gazebo supported by cedar columns topped with a cedar-shake roof. The interior is equipped with a copper-urn firepit. A series of boulders serve as steps from the structure down to the Byram River. The fairy-tale chicken coop with an inviting green door is built mostly of these same rocks interspersed with Pennsylvania fieldstone.

In addition to her self-described role as “the chicken lady,” Kimberly is responsible for the cutting garden, with its colorful dazzle of zinnias, dahlias, salvias and black-eyed Susans, among others. “The oak leaves we gather, along with shavings and the chicken droppings, make for a kind of black gold for gardening,” she says.

Like all master gardeners and landscape architects, the couple never considers their garden done. John talks about fashioning a series of pathways that will create a continuous loop of the property. “We want the garden and its areas to encourage as much natural wildlife as possible,” he says. But they might need to check with Amelia first, to see if she approves.

A version of this article appeared in the May 2016 issue of CTC&G (Connecticut Cottages & Gardens) with the headline: Where the Wild Things Are.