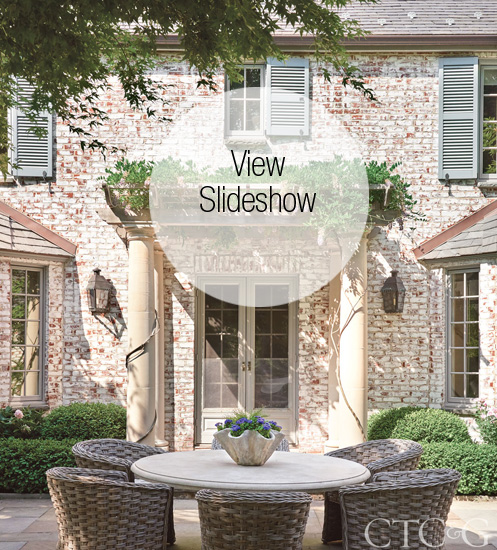 Taste, as we all know, has the uncanny ability to change on a dime. For longtime clients of interior designer Michael Whaley, though, their evolving style was more of a subtle shift than a drastic departure—their penchant for classic traditional taking a somewhat more contemporary turn, reflecting their life as a couple with growing children. Their 1930s English-style house in Darien had already been through something of an identity crisis before Whaley got his hands on it when they bought it in 2007. “It had been renovated a million times over the years,” notes Whaley. “The layout didn’t make sense, and the entrance just wasn’t in keeping with the house.”

The designer created an entirely new entrance from the ground up, lowering the roof line, adding a sweeping double semi-circular stair and placing an ox-eye window over the door. Inside, a revamped layout laid the groundwork for pieces the couple has been acquiring (with Whaley) since the late 1990s. “Over the years, their style has evolved to take on a slightly more contemporary feeling. I don’t look back on anything I’ve ever decorated and think, ‘Ugh! What was I doing!’” says Whaley. “I create classic interiors that stand the test of time. They might only need some new pillows or a few modern accessories to make them more current.”

In the dining room, for instance, Whaley had applied a wainscoting of Chinoiserie-style fretwork over mirrored panels below walls painted with seven layers of Farrow & Ball’s high-gloss Mahogany at the time of the renovation. Its furnishings—reproduction Sheraton-style chairs and a 19th-century Georgian table—have classic traditional written all over them. When the couple decided they wanted to move in a more transitional direction, Whaley added modern art and a standout antique Anglo-Indian green glass lantern that hangs over the dining table. “This room truly stands the test of time with one foot in the past and one foot in their future,” he says.

If the dining room is a nod to their shifting style, then the family room is playful wink. An aqua, green and brown ikat–covered sectional wraps around the room (“we wanted something summery and beachy”), and four white lacquered cubes create a coffee table. “You can pull them apart to use as drink tables or an extra surface when you need one,” says the designer. “This room has a playful feel to it. It’s one of the more casual rooms, and there are always people in this room—always.”

The mudroom, also recently redone, has that same relaxed and playful vibe. Originally the family room, Whaley converted it to the mudroom and designed a painted floor in ebony gray and pale blue zigzag. Custom mirrored lockers and a four-foot octagonal ottoman covered in calfskin designed by Whaley add mudroom function with flair. “Most people want to do neutral in the mudroom,” says Whaley. “I wanted to do something jarring and exciting that gives you a lift right when you walk in. Why can’t it be beautiful and glamorous?”

The master bedroom, while glamorous, takes on a decidedly different tone. “After having lived with the same scheme in two other houses, it was time for a change, and we went for a lighter, more simple approach,” says Whaley. “They wanted to break away from traditional and have a much more streamlined look.” Chintz curtains were replaced with beautifully tailored ones embroidered with pale blue green and a dash of acid green. A bedside table and bench, once decoratively painted, were redone in antique white with simple striping for a more peaceful and less fussy look. “I wanted to have a very peaceful, clean room but not have it look like anyone else’s,” says Whaley. “It’s the quality of workmanship—everything is custom made—that makes a room standout. That’s how I do things. ”

A version of this article appeared in the February 2016 issue of CTC&G (Connecticut Cottages & Gardens) with the headline: Natural Evolution.