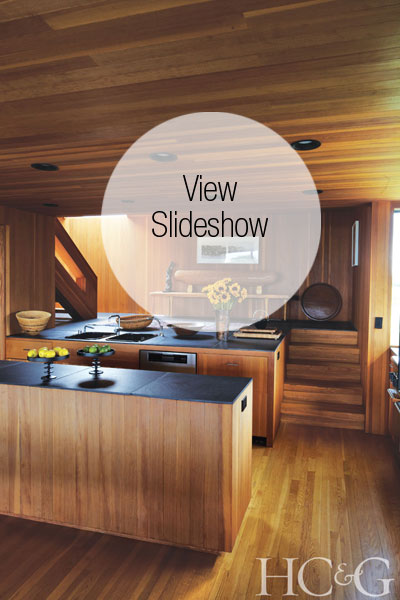 In 1969, when they were still in their 20s, a visionary young couple named Sandy and Stephen Perlbinder moved into an oceanfront home they had commissioned from an up-and-coming architect named Norman Jaffe. A Chicago native and UC Berkeley graduate, Jaffe was making a name for himself by fusing the vernacular architecture of the East End with his own contemporary vision. He described the modern yet rustic Perlbinder residence as his ultimate “dune house.”

In the ensuing decades, the Perlbinders raised a family in their beloved house on the dune, but they came close to losing it twice. In 1983, a fire caused by a faulty heater devastated the living room, which they had to rebuild. And in 1998, a series of unusually fierce nor’easters eroded the very dune on which the house was so strategically perched.

“The first question was whether to even try to save the house,” says Sandy Perlbinder, a filmmaker. With its pyramid-like design—inspired by both classic New England saltbox houses and a conversation she had had with Jaffe about the Mayan ruins in Chichen Itza—the home was now listing precariously, with no support below its foundation. It was also nearing its 30th birthday and needed new mechanical systems, windows, and cedar shakes, which Jaffe had used to clad both the roof and the exterior walls. But Jaffe was now gone. In 1993, he died of an apparent drowning during an early morning swim in Bridgehampton.

The Perlbinders contacted the late architect’s firm about renovating and expanding the house, but none of the proposed designs resonated with the couple. “We thought it would be best to find someone who could respect the original vision but bring it into the 21st century,” Sandy says. It just so happened that the couple’s son-in-law, Cristian Sabellarosa, was embarking on a career as an architect.

After consulting with Sabellarosa, they decided to move the house inland some 350 feet from the sea and add wings on the east and west sides of the original structure. Sabellarosa cloaked the new construction in a mahogany and polycarbonate lattice shell, a “second skin” that not only protects the building from the elements but maintains a cohesive design throughout.

The expansion plan added some 4,000 square feet to the original home’s 3,400 and simultaneously satisfied Sandy’s wish list: With an expanding family that now includes two married daughters and five grandsons, the Perlbinders wanted a private space for themselves as well as a bedroom, bathroom, kitchenette, carport, and a studio for Steve, now retired from his career as a real estate developer. Sabellarosa located the master retreat in the new east wing of the addition and positioned all the other rooms in the west.

For Sabellarosa, revising the work of a noted architect was a challenge. “When you’re younger and you get a shot, of course you want to leave your stamp,” he says, “and this project actually took a lot of self-discipline. On the other hand, I could say, ‘I’ll play Jaffe,’ and be contextual.” Certain of Jaffe’s design strategies have endured, such as matching countertops and floor surfaces, which Jaffe accomplished in the original kitchen with black West Virginia slate. Sabellarosa echoed the notion by using poured concrete for both the vanities and floors of the new bathrooms. In the master bath, which features a custom concrete tub, he added opaque sandblasted glass walls and floor panels, providing privacy and light while referencing the patina of sea glass.

Like Jaffe before him, Sabellarosa designed some of the furniture, too, though he credits his mother-in-law and her “great sense of design” when it comes to the interiors, which feature antique Persian rugs, Italian sofas, and classic mid-20th-century furniture by Hans Wegner and Alvar Aalto. A George Nakashima coffee table in the study is a fitting complement to pieces by such contemporary designers as Christian Liaigre, Spencer Fung, and Chris Lehrecke.

For the grounds, the Perlbinders tapped landscape architect Christopher LaGuardia, who had worked with Jaffe for eight years. “After the house was moved back,” says LaGuardia, “it looked like a big tumbleweed sitting out in the middle of the farm field.” He proposed digging a large pond on the north side of the house, using the excavated soil—some 30,000 cubic yards of it—to create a new dune to support the house. Fortunately, there was ample space on the property, which still includes a working potato farm. In keeping with Jaffe’s affection for using certain materials in abundance, LaGuardia stuck to “a single material expressed throughout the landscape—meadow grass without ornamentals.”

Relocating the house required cranes to haul the untethered structure from its original foundations on I-beams lubricated with Ivory soap. The inland trek went so smoothly, Sandy says, that a bottle of Perrier on the kitchen counter remained upright and intact during the move. Today the Perlbinders’ backyard pool, added in the 1970s, stands between the house and the ocean.

Sandy Perlbinder views both the move and the additions as liberating. “We were trapped in this piece of sculpture, and it was so beautiful and so vertical that we thought we couldn’t add on to it,” she says. “We were forced to move the house back and do all these things, and in the end we were able to get this wonderful, amazing space.”

A version of this article appeared in the August 15 2013 issue of HC&G (Hamptons Cottages & Gardens) with the headline: Norman Conquest.