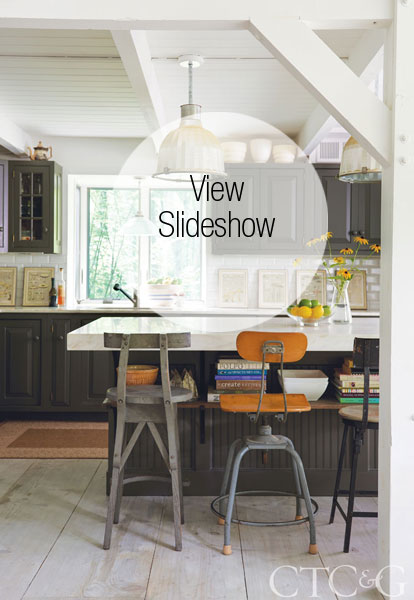 Built by a horse-carriage hobbyist who required barns for his horses, harnesses and coaches, the house on a quiet road in Litchfield County came with too many outbuildings, a liability for most buyers. It languished on the market for three years until it was discovered by a couple who run a popular antiques store nearby and recognized that all the property’s barns and sheds precisely suited their need for stashing and sorting their warehouse goods. Now furnished with their collections and inventory, the perfect match has become a perfect mishmash of delightful historic memorabilia.

An artist and a former advertising art director, Jonathan Bee and Kent Hunter scour the region for merchandise not only for their shop, Hunter Bee, but also for their own amusement. Customers of their store just across the border in Millerton, NY, are familiar with the couple’s inventory of quirky-humorous merchandise. Their chic aesthetic favors items that are clever, worn and unexpected: a polka-dot armoire, a side table perched on a piano pedal base, recycled truck-tire patio chairs, an Indian palace gate converted into a coffee table. Featured in the book Never Stop To Think…Have I Got a Place for This? (Rizzoli, 2014), they seize on items that “give your home personality.” In that case, their own house is Miss Congeniality.

While initially concerned that the rambling dwelling was “a crazy big house” for two people and their rescue dog, Garbo, they were attracted to the open plan and light. It wasn’t long before the cabin-like spaces were transformed into a setting for their irresistible objects. Embracing the sense of openness, they painted the dark-brown beams white, left the windows bare, stained the extravagant floorboards (some two feet wide) with a Belgian gray reactive stain and finished them with two coats of white French wax.

The mudroom was transformed into an elegant entry hall centered around Hunter’s giant wooden model of the 1958 Brussels World’s Fair Atomium, a tribute to his proclivity for geometric shapes. Surrounded by wallpaper with a woodstack motif, a hollowed rock basin perches on a zinc counter carefully aged by an “ancient secret” method that Hunter won’t divulge beyond disclosing it involves a toxic household product. A Danby marble–topped island was installed in the kitchen. Only the bathrooms were totally updated, with utilitarian and designer fixtures. The powder room illustrates how their contrasting styles have merged throughout the house. After Hunter, the classicist, installed a rescued porthole to serve as the bathroom window, Bee started adding whimsical nautical artifacts: a sailor soap dish, anchor hooks, a reverse glass ship painting.

Spaces throughout the house are linked by collectibles—clusters of stone grapes, stone mushrooms, stone books, carved wooden bottle stoppers, paint-by-number needlepoint pictures, to name a few. To showcase their almost endless collections, most of the house is a monochrome palette that is favored by Hunter, but Bee’s love of color gives way in a corner landing furnished with a French settee upholstered in kitsch tag-sale hooked rugs atop a vivid 1970s shag rug.

Among the primitive collectibles are pieces created by notable artisans. Gracefully curved planters on the screened porch were crafted by Willy Guhl, the Swiss designer who invented lightweight fiber cement. The 1930s tubular aluminum dining chairs are by “early master of metal” Warren McArthur. Darren Waterston painted the enormous canvas that stretches above the fireplace up past an upper balcony.

But what has become of the multiple barns? Formerly green, they’ve been painted matte black and are stocked with antiques and flea-market finds. One entire stable is devoted to seating, and each of the horse stalls is being transformed into a showroom vignette. Some of the items move back and forth from the barn to the house and eventually to the Hunter Bee showroom. “People ask us if everything in the house is for sale,” Kent says. “No! Because I love it. And yet, if we get tired of something, we can always take it to the store and sell it. We’re just caretakers, it will all be passed on.”

A version of this article appeared in the November 2016 issue of CTC&G (Connecticut Cottages & Gardens) with the headline: Out of the Ordinary.