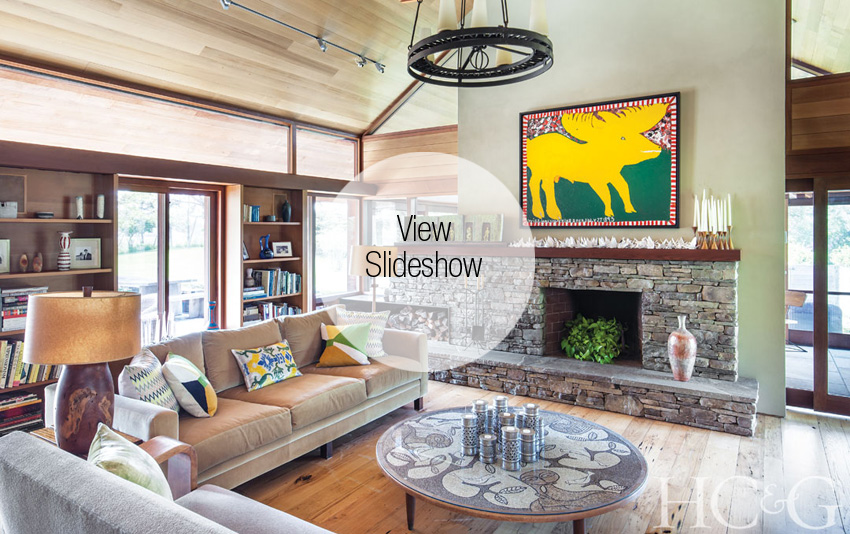 Smooth surfaces rarely hold interest for ceramist Toni Ross. Texture is key, whether in the fossil stone in her entry foyer, the marks left by string baked into her sculpture, or the rise and fall of diced strawberries on a homemade tart.

Clay first called to Ross in high school, where she had a view of Manhattan’s SculptureCenter from her bedroom window on the Upper East Side. Although she holds a B.A. in film studies from Wesleyan, her father, the late media mogul Steve Ross, encouraged her to pursue art and introduced her to Elaine de Kooning, who became an early mentor. While Ross was in her 20s, de Kooning helped her find a studio and lodging in the Hamptons and provided early critiques of her work. “She was very generous in soul and spirit,” says Ross. “Having the example of a woman artist achieving her goals was very important to me.”

Ross’s vessel-like sculptures often evoke ancient relics, but she says it is not intended. “My work is very intuitive,” she explains, joking about the time she walked into a venerated Indian temple and asked, “How did they copy my work?” On a trip to Egypt, soon after she completed a series of cubes, she saw similar ones marking the gates to heaven for the pharaohs. “The more I’ve traveled, the more I’ve developed an affinity for things that show the patina of time. There is something very beautiful to me about leaving a mark of your presence, from the pyramids to ancient murals and Cycladic art. It’s all so elegant and simple, using symbols to convey larger concepts.”

Ross finds words limiting and admits that it’s often difficult even to title her pieces. “I’m not New Agey at all,” she says, “but I am intrigued by the past and by things that are unknown and uncertain—which is partly about my upbringing and partly about lost memories and the layering of time over those memories.”

Toni Ross has left her own personal mark on the Hamptons, where she is perhaps more familiarly known for Nick and Toni’s, the popular East Hampton restaurant that she launched with her late husband, Jeff Salaway, in 1988. She also helped found the Hamptons International Film Festival (she is still a board member) and the Hayground School. As an artist, she has dedicated most of her time to both sculpture and works on paper for nearly 20 years, exhibiting recently at the Galerie Dutko in Paris and frequently at the Drawing Room in East Hampton. Next month, she is a featured artist in the annual Parrish Road Show, and in September, she will have a show at New York’s Ricco Maresca gallery. “In the last five or six years, clay has suddenly become the hot new medium—after, like, 15,000 years,” says Ross, whose pieces are collected by Jack Lenor Larsen, Jo Carole and Ronald Lauder, Annaliese Soros, and Alice and Tom Tisch, among others. “It’s being accepted as an art form, so you’re seeing a lot more clay in fine-art gallery settings.”

Ross works primarily from a home studio on the grounds of her two-acre residence in Wainscott, which she acquired 24 years ago, drawn by the privacy and views of Wainscott Pond. A long stone drive meanders past a fenced garden where she grows raspberries, vegetables, and flowers and keeps beehives and a chicken coop. Her newly acquired chickens provide endless fascination for her dogs, George and Gracie—who, while comedic, were not named for the famous duo of early television and radio. The studio is set apart from the main house by a stone-terraced pool. Consumed with her work, Ross says, “I only have things that don’t require attention. Even the chickens have automatic feeders.”

Of the property’s evolution, Ross recounts, “There was a farmhouse here, and sadly we tore that down. I ended up building the studio first because we were in a rental house, and I thought I’d start working again. My husband had just died.” Salaway, the father of her children Noah, now 26, and Sara, now 22, was killed in a 2001 car accident, and Ross was re-forging her life.

She built the main house, designed by architect Lee H. Skolnick, in 2004. The shingled two-story home and guest wing, influenced by both local farmhouse vernacular and Japanese design, is laid out to maximize views of the estuary and encourage indoor-outdoor living. “My goals in this house are comfort, warmth, and elegance,” Ross says.  “During the design process, I kept asking, Will it be warm? And that’s how we ended up with so much wood.”

Accenting all the wood and expanses of glass is Ross’s collection of outsider art. “William Hawkins, who was born in 1895, is one of the first artists I started collecting,” Ross says.  “He started painting when he was in his 80s. I even had the chance to meet him.” She has seven of his brightly colored canvases, in addition to works by Bill Traylor, who was born into slavery and also started working in his 80s. Near the kitchen is a double-sided piece by James Castle, another self-taught artist, made with spit and soot. “He was very prolific,” Ross notes. “He was deaf and mute and made incredibly beautiful things.”

For Ross, the heart of the home ultimately lies outside it, in her studio. A wooden structure punctured by large skylights, it comprises a large workspace with concrete floors that can be easily hosed down, a kiln that can be fired to 1,800 degrees, and a sitting room and display area. Motown, the blues, or Ella Fitzgerald often play on the stereo while she works. “Sometimes I end up dancing,” Ross says with a laugh.

A basket of driftwood from beach walks suggests her fascination with reclamation. “I often notice what remains or what is left behind,” Ross explains, adding that she learns from other people’s interpretations of her work, too. “Someone might say to me, ‘That looks like the struggle between control and chaos,’ and I will say, ‘Right! That’s true.’ Although it didn’t occur to me. But certainly in this space I find tremendous serenity amid a chaotic world.” A recent series of sculptures, wrapped in string, underscore the thought. “Keeping it together. That’s a big one. I’ve had a lot of keeping it together in my life.”

A version of this article appeared in the July 1, 2016 issue of HC&G (Hamptons Cottages & Gardens) with the headline: Breaking the Mold.