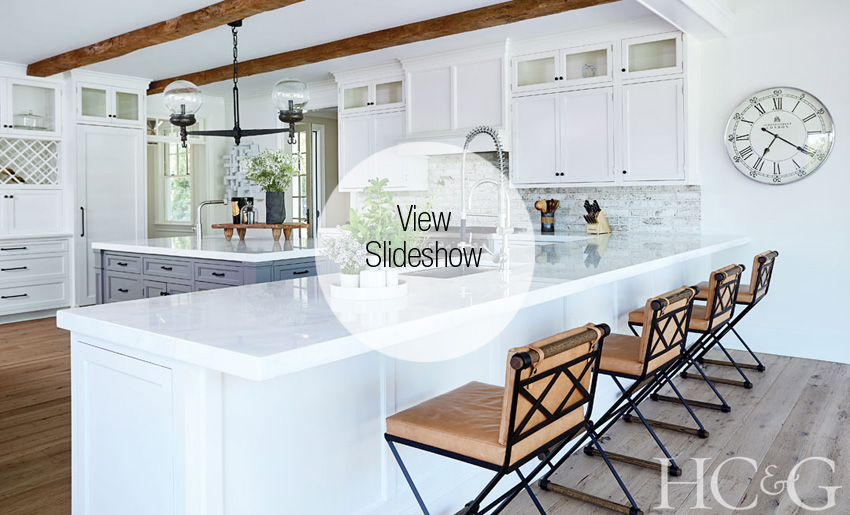 When Cailin Shannon-Wunder first laid eyes on the Hamptons 14 years ago, she was surprised by what she saw. The West Coast native had spent a lot of time in Malibu and Santa Monica and thought that the Hamptons would be similar. “Everyone refers to the Hamptons as the beach, so I was shocked to see that it was agricultural and full of farms,” says the interior designer, who grew up in Yakima, Washington, a place she likens more closely to the East End. She was equally delighted to see the tree-lined streets, quaint towns, and traditional architecture. “I love that you can live in the middle of a potato field during the day and then go out to a sophisticated dinner in town at night. That’s something most agricultural areas don’t offer.”

What Shannon-Wunder at first jokingly deemed “fancy farmland” has become her stomping ground, a place she now calls home. Her family—husband Seth and children Elle, seven, Beau, five, and Knox, 18 months—spend every weekend during the summer and almost every holiday at their residence in Bridgehampton, and as much as she likes the convenience of Manhattan during the week, she avers that she is not a city girl at all. “Sometimes you unexpectedly revert to what you grew up with,” Shannon-Wunder says. “For me, it’s important to live in an area like the Hamptons and go to all the local places, where people know who you are. I need to have that.”

Before buying their house, the couple had rented all over the East End, but when they were ready to put down roots, they pinpointed their search toward the middle. “We love being near Bridgehampton Village and having access to all the surrounding towns,” says Shannon-Wunder, who can walk easily from her front door to Marders, the Candy Kitchen, and T. J. Maxx.

T. J. Maxx? Not the first shopping resource one would associate with a stylish Hamptons decorator. But it’s nirvana for Shannon-Wunder, who loves imbuing her projects with a high/low vibe. “I’ll mix really expensive chairs with a table from HomeGoods,” says the designer, who’s fond of shopping for unusual accessories on sites like Etsy or perusing Target.com to see what Nate Berkus has been up to. And when she needs to find exactly the right piece, she’s not above making it herself: Witness the willowy pendant lamps in the stair hall, which she fashioned from Vietnamese fishing nets, and the family room’s cocktail table, constructed from old railroad ties. “I even like to ask shop owners for a look inside their storage barns, just to see what’s been sitting around for the last decade.”

To keep things simple in the 8,000-square-foot, gambrel-style house—which Southampton-based architect Brian Brady updated and retrofitted, taking it from just another spec to downright spectacular—she settled on a Scandinavian-style palette of beige, white, and gray, often adding texture and gravitas to certain furnishings with the help of local faux painter Heather Dunn. Still, decorating a six-bedroom, seven-bath house is not an easy undertaking. “The master bedroom was originally intended to be a rec room,” she says, “but we decided to turn it into a 2,500-square-foot master suite.” To give the kitchen a slightly rustic appeal, Shannon-Wunder and Brady installed reclaimed floors and beams from an old barn in Tennessee; in the dining room and mud room, they laid brick floors in a herringbone pattern. And a gleaming Dutch door, painted a rich black, now greets visitors at the front entrance. “So many people go for new construction,” Shannon-Wunder says, “but it tends to look the same. We took down all the cheesy, shiny stuff and made it look like a farmhouse, the way it should. It’s just a newer farmhouse.”

A version of this article appeared in the September/October 2016 issue of HC&G (Hamptons Cottages & Gardens) with the headline: Farm Fresh.