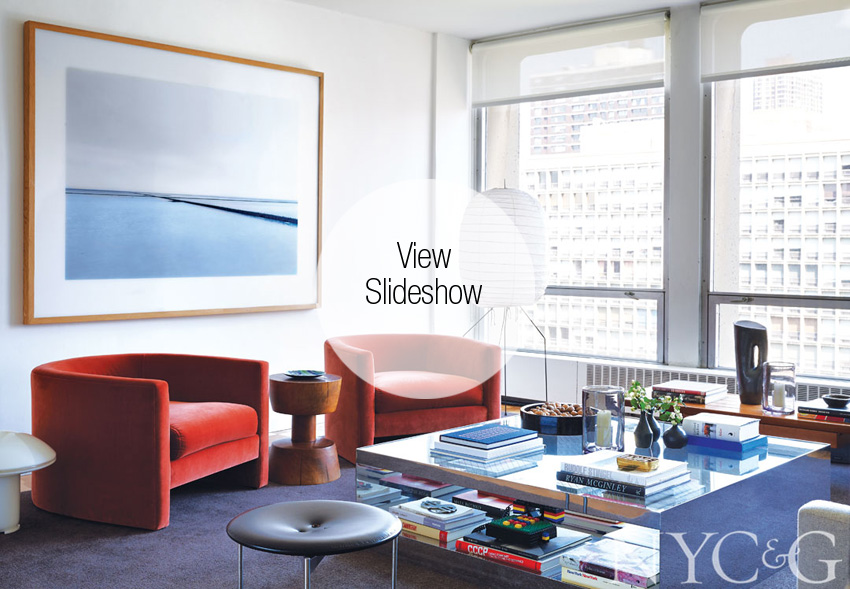 Every few months, designer Timothy Brown positions himself in the entryway of his one-bedroom apartment, looks into the living area, and takes an informal survey of the furnishings. In what is a precisely clean, uncluttered space on the 18th floor of I. M. Pei’s modernist monument, Kips Bay Plaza, he often feels the urge to pare down even more. And Brown never lets sentiment interfere.

“I ask myself, What do I not want to look at anymore, and what can I take away?” says the designer, a native Tennessean who has lived in New York since 2001, when he graduated from the University of Tennessee. Although the collection of ceramics on the kitchen shelves typically remains untouched, Brown changes out major pieces of furniture with abandon, in an effort “to keep design fluid.” Where only last year he used a small round coffee table that served the bright, airy living room well, out it went once he found a massive circa-1970s steel replacement by Joe D’Urso. “I turned over the previous table to a client,” he explains. “If I like a piece of furniture and can live with it, it makes sense that it might work in the home of a client. If I could live with just a chair, a bed, and a TV, I’d be fine. But I do need places for people to sit.”

Brown grew up in “an ordinary ranch house” on a cattle farm south of Nashville, but even as a boy he recalls looking through design magazines, smitten in particular with sparely decorated interiors by such industry talents as Victoria Hagan. “I wrote to her asking for an internship, and she gave it to me,” says the designer, who later worked for Wayne Nathan and Robert Stilin before launching his namesake firm in 2011. Ever since arriving in New York, Brown has imagined occupying the landmark building in which he now lives. “Maybe it’s about coming to this city from somewhere so different, but I always fantasized about living in a modern building more than a traditional, old-world New York apartment. This is a real modern building, one with history. Every morning, I love to lie on my sofa and watch the sun rise and fill the courtyard between the two towers.”

Brown has built his career by being a careful listener and respecting his clients’ aesthetics, although he admits that designing rooms without any back-and-forth or compromise can be a joyous experience. “At home, I’m able to take risks that I can’t with clients,” he says. “I have no problem mixing a Noguchi lamp with a flea market find.” To wit: In the living room, he has positioned two dusty-rose 1970s velvet chairs by Milo Baughman amid a mélange of furnishings, including a vintage Baker sofa, a modernesque bench, and the aforementioned brutalist coffee table. To maintain consistency throughout the apartment, Brown has employed low-pile area rugs and sheer solar shades. “A space feels more minimal when there’s less material and color used,” he says, adding that he applied Venetian plaster to the walls by himself, in order to create a unifying, subtle glow. “The windows are big, and there’s so much natural light that the walls give off some reflection. You can tell right away that there’s something going on with the walls.”

Artwork plays a crucial role and is strategically placed, such as a pair of Dan Jones photographs, depicting crashing waves, hanging above the sofa. “You almost feel like you’re in the ocean, about to drown, but safe,” Brown says. In the bedroom, directly opposite the bed, a framed Ed Ruscha beach blanket references the apartment’s quiet gradations of color. “I feel most comfortable in a space where there’s not a lot of stuff,” the decorator emphasizes. “I call it warm minimalism.”

A version of this article appeared in the May/June 2016 issue of NYC&G (New York Cottages & Gardens) with the headline: High in the Sky.