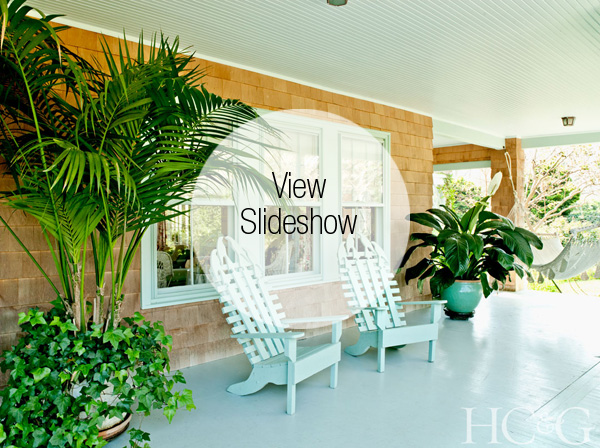 Designed in 1897 by Joseph Greenleaf Thorpe and built several years later, the 14-room Arts and Crafts–style shingled cottage has long lived in the limelight. In 1924, when the home was owned by Robert C. Hill, president of the Consolidated Coal Company, its celebrated walled garden was included in that year’s edition of Louise Shelton’s Beautiful Gardens in America. The garden was created by Hill’s wife, Anna Gilman Hill, with the help of prominent landscape architect Ruth Bramley Dean. In the book, Anna Hill told Shelton, “It was truly a gray garden. The soft gray of the dunes, cement walls, and sea mists gave us our color scheme as well as our name.” In 1927, the four-acre oceanfront property was purchased by attorney Phelan Beale, a partner of John Vernou Bouvier, who was also Beale’s father-in-law. Beale moved into Grey Gardens with his wife and daughter, both of whom were named Edith, and two sons. “Big Edie” and “Little Edie,” as the mother and daughter bohemians were known, essentially never left.

To see the house today, with its naturally weathering shakes, robin’s-egg-blue trim, and well-tended plantings, it would be impossible to guess what a wreck the property had become by the early 1970s. In 1975 the highly regarded documentary Grey Gardens, by filmmaker brothers Albert and David Maysles, shocked the nation. What had sparked so much interest in the house was the discovery (by the New York and then the national press) that the pair of eccentric recluses who lived behind the untamed hedges happened to be the aunt and cousin of Jacqueline Kennedy Onassis and her sister, Lee Radziwill. For 40 years Big Edie and Little Edie had been living on a miserly stipend provided by Phelan Beale when he abandoned the family in 1934. Once gowned, coiffed, and bejeweled, the two society women had become almost as feral as the scores of cats who shared their rooms.

In 1971, Suffolk County was about to condemn Grey Gardens, which Onassis and Radziwill had visited as children, because it no longer had heat, working plumbing, or a water-tight roof. Little Edie’s brothers had been trying to get the women to leave for years, but both Edies would have none of it. Onassis, then married to one of the wealthiest men in the world, and Radziwill came to the rescue of their disheveled relatives and had the worst of the mess cleaned up. They commissioned a new roof and had the interiors repainted. They also hauled away a 1937 Cadillac that had rusted to dust under a veil of vines. But before long the mother-and- daughter cat ladies let their home relapse into terminal decrepitude.

Enter Sally Quinn, who in the late ’70s was looking for a Hamptons home to replace her two-bedroom Amagansett house, which was too small for guests. “I’d looked at every house on eastern Long Island, but nothing seemed right,” says Quinn, who now spends the bulk of her time in a historic townhouse in Georgetown and a restored 18th-century farmhouse in southern Maryland. “Finally, my real estate agent said, ‘Well, there’s always Grey Gardens, but I’m not going to show it to you. It’s too disgusting.’” Naturally, this piqued the journalist’s interest. “The agent would have driven over her grandmother to sell a house, but she wouldn’t go inside Grey Gardens? I had to see it.”

So Quinn took herself to the front door one day in 1979, by which time Big Edie had died. “Little Edie opened the door in all her glory, and I stepped inside,” says Quinn. “‘How do you like the house?’ she said, and I said, ‘I think it’s the most beautiful house I’ve ever seen.’ She did a little pirouette and said, ‘Then it’s yours. All it needs is a coat of paint.’”

Perhaps just a tad more. The piano collapsed when Quinn touched the keyboard. The stove was falling into a hole in the kitchen floor. The sunroom’s ceiling had caved in on itself. “I cannot describe the squalor,” says Quinn, whose husband told her she was “out of her [bleep]ing mind.”

Little Edie made the sale on one strict condition, though: The house could not be razed. After the deal was finalized, she simply walked out the door, leaving everything behind. For the sum of $220,000, Sally Quinn and Ben Bradlee found themselves in the possession of an impossible dream.

That’s when Quinn discovered that the attic was full of family treasures: books, photographs, tableware, Louis Vuitton luggage, and much of the furniture that had graced the downstairs rooms at the height of the home’s glory, in the early 1930s. “Everything had to be repaired,” says Quinn. But after an intensive course of rehab, renovation, and reupholstering, much of it was returned to duty: wrought-iron bedsteads, painted bureaus, chaise longues, and wicker—lots of wicker.

Restoration work on Grey Gardens began in November 1979. By the following August, the Bradlees were able to move into a small area of the house. Working without a designer, Quinn created a period-inspired, laid-back summer getaway with lots of floral chintzes and no-maintenance coir rugs. “If we were going to be there year-round,” says Quinn, “I’d have furnished it differently—put down Oriental rugs and so forth—but we really do use it as a summertime house, so it’s light and informal.”

Quinn also set her sights on the garden, although the plantings were so overgrown that no one knew that its famed gray walls still existed, like a Mayan temple buried deep in the Yucatan jungle. The tangled growth that choked the place—Little Edie’s “sea of leaves”—was bulldozed to clear it. “The bulldozer had to be hoisted over the wall by crane to clear out the garden,” adds Quinn, who brought in landscape designer Victoria Fensterer to create an all-new garden inside the original walls.

Though Quinn was responsible for the bulk of the restoration, Bradlee wasn’t merely a silent partner. “She got some advice,” he says wryly, “and she listened.” Some of the couple’s discussions centered on whether to keep certain additions to the house, such as the sunroom (they saved it) and a second-floor balcony at the back of the house (they had it removed to bring more light into the living room). “It’s a warm and comfortable home,” adds Bradlee, “especially in the rooms overlooking the garden.”

Today Grey Gardens has groupies and even fan sites, and the Maysles brothers’ movie is now a cult film, but to the Bradlees it’s “mostly just a family place,” says Quinn. “We have a party most summers for Ben’s birthday. And there always seems to be 12 or 14 people around at any given time, so every night is something of a party.”

Public interest in the home—which now occupies two acres and no longer fronts the Atlantic, although it has a pool and tennis courts—was piqued again in recent years. In 2006 a musical version of Grey Gardens, starring Christine Ebersole, opened on Broadway, and in 2009 HBO aired the film Grey Gardens, with Jessica Lange as Big Edie and Drew Barrymore as Little Edie. So are there any ghosts walking the halls of Grey Gardens?

“Oh, yes,” says Quinn. “We’ve definitely got the ghost of Anna Gilman Hill, who put in the gardens. She came into my bedroom once. And of Little Edie. And of a sea captain Little Edie had an affair with. He came through her window for their assignations. At least that’s what she told me.” Bradlee is a bit more circumspect. “No ghosts,” he says, “but a lot of memories.”

A version of this article appeared in the June 2012 issue of HC&G (Hamptons Cottages & Gardens) with the headline: Grey Gardens Redux.

This article appears in the June 2012 issue of HC&G (Hamptons Cottages & Gardens).