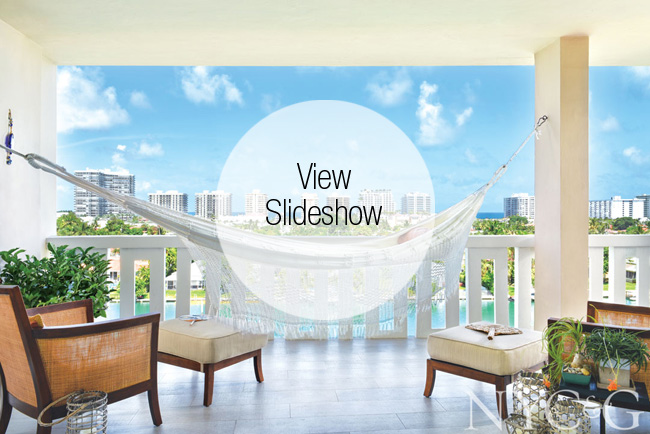 Moving from place to place has become the drill for interior designer Juan Carlos Arcila-Duque, who’s presently settled in Bay Harbor Islands, Florida, a few tranquil miles north of the hubbub of South Beach, where he also once made his home, in addition to New York City. In currently booming Miami, the still sleepy pair of isles in the middle of the Intracoastal, just a stone’s throw from the tony Bal Harbour Shops, has all the makings of the next hot neighborhood.

But Arcila-Duque couldn’t care less. “I’m not attached to anything here,” he says, surveying his art-filled penthouse condo in the somewhat nondescript 1966 London Towers building. “I’m the guy who moved to New York City from Cartagena, Colombia, with only one suitcase. Everything is replaceable; it’s what’s locked up in your memories that matters. If this place goes up in flames, my passport and my Amex card are all I’m taking!”

Since his inauspicious start in the States, in 1992, Arcila-Duque has not only worked as an interior decorator, but also written a book on Latin style, launched an eponymous furniture collection, owned a design and art gallery, and added commercial spaces to his résumé. If he has any one passion, however, it’s art, and the way it can coalesce with great architecture. Arcila-Duque typically designs spaces that are clean and open so that they function as ready environments for his clients’ collections. “I always start with the architecture,” he says. “It’s a must to respect it and work with it, but only if it’s worth it. When you can’t bring soul to the overall composition, then you need to start over.”

In Bay Harbor Islands, Arcila-Duque has adhered to his credo. He retained the pad’s original decorative interior doors, elaborate hardware, and French-y fireplace, but jettisoned pink marble flooring in favor of more art-friendly matte white porcelain tiles. “It was a bit too feminine for me when I first saw it,” he recalls. “Now it’s a grown-up bachelor pad that looks good both day and night.” The neutral milk-white walls and straight-lined furniture create not just an elegant retreat for Arcila-Duque, but a plain backdrop for displaying his photography and art collection to optimal effect. “There’s not too much pattern in my world—that comes from the architecture and the art you put on the wall. The idea of art having to compete with fabrics is just impossible.”

Like many dealers and collectors, Arcila-Duque frequently rotates his artwork, in his case almost monthly, which explains why some pieces lean here and there against the walls while he decides where to put them next. He doesn’t regard his collection as precious, but rather thinks of his apartment as an ad-hoc art gallery, in addition to his home. An avid entertainer, he often invites friends and clients over for cocktails, who occasionally leave with an artwork when the night’s over. “I’m selling pieces from my collection all the time,” he says.

In 2002, after his successful decorating stint in Manhattan, Arcila-Duque moved to Miami and opened a gallery showing the work of such photographers as Horst, Peter Beard, Helmut Newton, and Albert Watson, along with furniture designed by India Mahdavi, S. Russell Groves, and Christophe Delcourt. Located in Miami’s now-thriving Design District, it was ahead of its time, although he appreciated the lessons he learned. “I was a pioneer, and working with all those artists was great for my ego, but the Design District was dead,” he recounts. “I had mistakenly thought it was going to be like Chelsea in the early ’90s.”

But Arcila-Duque continued with his design work, heavily sought after by clients who appreciate his pared-down style and curatorial eye. “I’m an editor of my clients’ dreams,” he says. “The traditional idea of a draconian decorator is gone, since most people who hire decorators really know what they want now. It’s time to revamp those old clichés about interior design.”

A version of this article appeared in the December/January 2016 issue of New York Cottages & Gardens with the headline: Miami Nice.