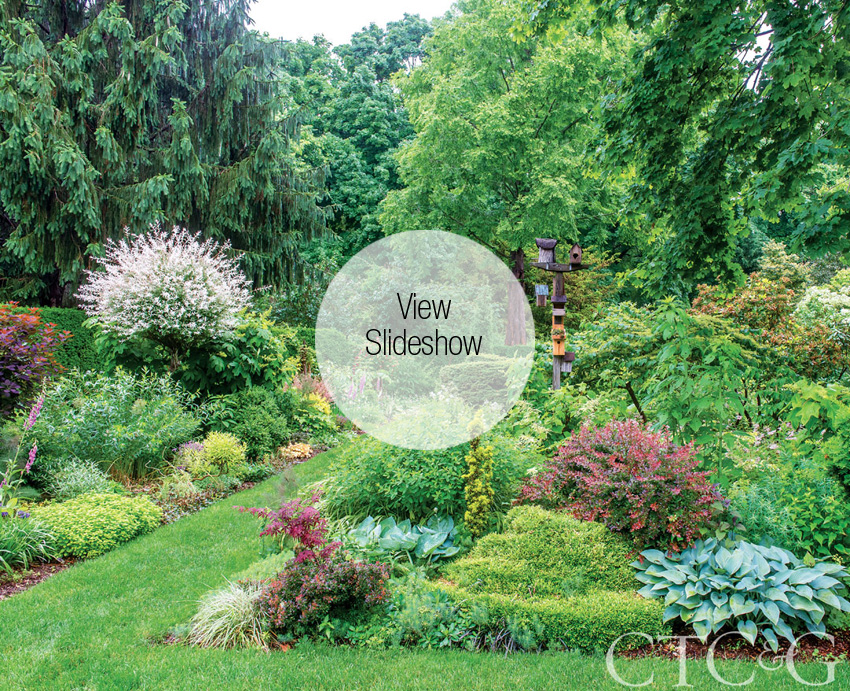 On first encounter, the Branford property was nothing more than a shack (a former garage, actually) strangled in a menacing rabble of scrub trees. But it was immediate romantic submersion for Frederick Bland. Although he had tended his fair share of rooftops in Brooklyn, this was the designer’s first ground-level garden. Back in 1993, the 50-by-300-foot lot felt like a vast kingdom. “I had images of Sissinghurst and Great Dixter floating through my head,” says the managing partner at Beyer Blinder Belle Architects & Planners.

Dreaming big started in childhood. Growing up in Houston, Bland spent his formative years romping through his nearby grandparent’s rose garden and cavorting in their camellia collection. For three years in young adulthood, he lived near Miami’s Fairchild Tropical Garden. All those influences left their mark. Bland had just been elected to the Brooklyn Botanic Garden board of directors, when he and his wife, Morley, bought the Branford house. It was finally time to dig in.

For a gardener whose field is urban design, plotting out an axis came naturally, but Bland saw no reason to stay strictly straight and narrow. Instead, Uptop (it seemed like high ground compared to the surrounding flood plain lowlands) was designed with undulating peripheral enhancements to soften the views as the landscape gracefully unfolds as a linked progression of horticulturally rich happenings. Orchestrated as a promenade, cohesive architectural motifs provide unity while the botanical convocation keeps it thrilling.

What the architect didn’t want was rooms. “You want to move through the garden like you move through a city,” says the adjunct professor of art history at NYU. “You don’t want static spaces; you want to be drawn into the next adventure.” Instead, he inflicts order and defines space with clipped hedges and low stone walls from rocks found on the property. (“The Stony Creek section of Branford was once an internationally known granite quarry,” Bland says). They guide the eye but are in no way claustrophobic. Meanwhile, one-of-a-kind fencing gives the garden its signature stamp.

The first project on Bland’s master plan was staging a double perennial border. An obsessive collector (he counts magnolias, rhododendrons, viburnums, hydrangeas, epimediums and citrus among his fetishes), a mirror border was definitely not his ideal. He wanted a venue that could stand with open arms at the receiving end of his ongoing collecting sprees. Great Dixter was his inspiration for the space, but his approach was more laissez-faire in a decidedly American vein.

“I call it a cottage garden with aspirations,” he quips. Plants tumble joyously into one another like one big happy family. Bland’s goal was to craft an exuberant romp of texture, color and form. And he succeeded. Rather than focusing on the destination, the journey is key.

Even with the slimmest possible street frontage, the plantsman’s efforts certainly weren’t lost on his 97-year-old neighbor. She sent the highest possible endorsement in 1997 by asking if he would purchase her land, while granting her lifetime living rights. The Blands didn’t hesitate, bringing their holdings to a full acre. When his neighbor passed away at age 101, he renovated her house, added a greenhouse, and moved in, relegating his former abode to guesthouse status. Meanwhile, he worked on and expanded his beloved sight lines as well as integrating a pool, which he surrounded with a wildly free-form fence that is echoed elsewhere on the premises.

And the garden keeps growing. Although he rounds off his tally at 1,500 different species, dozens of additions are made annually while contented oddities already in residence continue to thrive. As a result, the lawn area is continually being cannibalized by an ever-expanding inventory of rarities brought home from auctions and specialty nurseries. Plus, the soil has been amended to add woodland habitats and receive the fruits of his latest botanical binges.

Uptop is unlike any garden in this country or abroad. If he started with an infatuation of British icons, Bland rapidly redefined the playing field. On all levels, the landscape is exceptional and one of the reasons is its muscular botanical repertoire. “This is every inch the work of a collector,” he says proudly. And it’s open to the public this year through the Garden Conservancy tour on June 4; go to gardenconservancy.org for tickets and information.

A version of this article appeared in the May 2016 issue of CTC&G (Connecticut Cottages & Gardens) with the headline: Green Acres.