Tour the Chic Paris Apartment of a Globe-Trotting Photographer 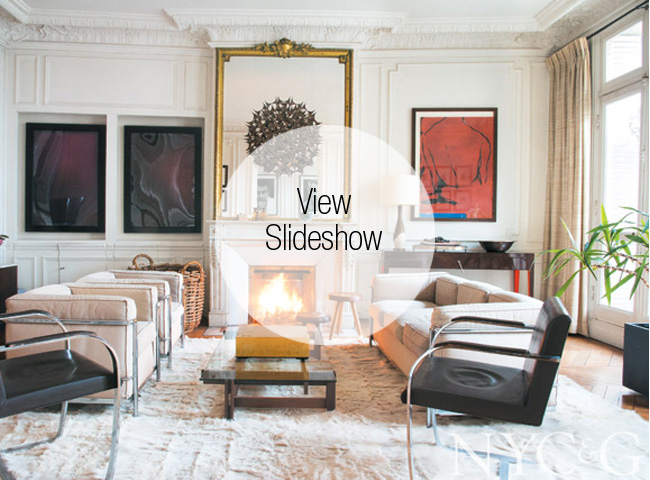 They say “the Seventh is heaven” of Paris’s Seventh Arrondissement, the upscale neighborhood that is arguably the City of Light’s most aristocratic quartier. Famous for Les Invalides—the resting place of Napoleon—it’s also home to numerous government ministries, embassies, ex-pats, the musées d’Orsay, Rodin, and Maillol, and the city’s elite, with the legendary Eiffel Tower, visible across the neighboring Champ de Mars, as a punctuation mark.

It’s easy to forget that the impeccably manicured homes and quietly beautiful streets lie smack in the middle of a bustling metropolis—though the cars racing across the Pont Alexandre III and along the Quai d’Orsay serve as urban reality checks. For the always-on-the-go photographer Stephane Kossmann, the district’s surprising serenity is a welcome retreat, so much so that he and his wife, an executive for a luxury goods firm, have called it home for the last seven years. “It’s a very pretty part of the city,” Kossmann says of the apartment that was first rented by his wife and later became theirs when the opportunity arose to buy it. “It’s a good-size space that used to have four fireplaces, although now there is just one in the living room. When winter comes, we light a fire almost every night.”

For the past 30 years, Kossmann has divided his time principally between Paris, Los Angeles, and New York, where he keeps an apartment and studio on a hilly stretch of Staten Island. “Every morning, I see the city,” he says of his sweeping view of New York Harbor and Lower Manhattan. When he’s in town he frequently shoots for such clients as Ralph Lauren, Harry Winston, Chopard, and de Grisogono. Additionally, each May he covers the red carpet festivities at the Cannes Film Festival in the South of France, where he has carved out a niche shooting celebrities—not just when they are posing for their fan base on the steps of the Palais des Festivals, but also in their off moments, when they’re not looking.

These candid shots are striking in the way they immediately dissolve the gloss of celebrity: Diane Kruger glancing off to the side amid the glamorous whirl, Benicio del Toro in close conversation with a fellow actor, and so on. Kossmann is working on his third book on the festival, a place where he’s just another member of the paparazzi. “I get to be hated once a year!” he jokes. “But it’s always exciting, and the only time I get to mingle with the press photographers.”

His work at Cannes and other film festivals inspired Kossmann to start up his own event six years ago. Les Nuits Photographiques Pierrevert is held every year in the town of Pierrevert, a 30-mile drive from Aix-en-Provence, toward the Alps. “About 50 photographers descend on this small village to participate in exhibitions, book signings, lectures, a master class with a guest of honor, and three nights of screenings,” he says. “It’s been great. Next year we plan to expand the festival to Morocco, launching in the fall.”

Paris, though, is where Kossmann and his wife kick back. The photographer’s work hangs throughout the apartment: In the combination dining room and sitting area, a set of portraits that appear to be different subjects are actually the same man, a friend from the South of France whom Kossmann has taken a photo of every five years for the past couple of decades. (He happens to be a dead ringer for Samuel Beckett.) “Many people who have seen these pictures are convinced he’s not the same person,” Kossmann says. In the living room, a pair of paintings by Arnaud de Gramont hangs on one side of the fireplace, with a work by Jean-Charles Blais on the other, above a console—a prototype—by Philippe Starck. The seating pieces are a mélange of modernist beauties: petite Charlotte Perriand–designed stools, a pair of Mies van der Rohe armchairs, a sofa and pair of armchairs by Le Corbusier. The apartment is made for entertaining, measuring a comfortable 1,600 square feet, although it has only one bedroom, which gives way to a small office and dressing room.

Kossmann and his wife often visit les puces, Paris’s legendary flea markets, on the increasingly competitive hunt for pedigreed furnishings. “We spend Saturdays and Sundays there,” says Kossmann, admitting that his significant other does most of the gathering. Now that the apartment is finished, it’s all the better, since he and his wife have recently bought a property in the South of France, next door to the farm that his mother owns in the Luberon. Though not far from home, it’s enough to give this peripatetic photographer another chance to nurture the way he looks at the world.

A version of this article appeared in the Dec/Jan 2014 issue of New York Cottages & Gardens with the headline: Paris Match.