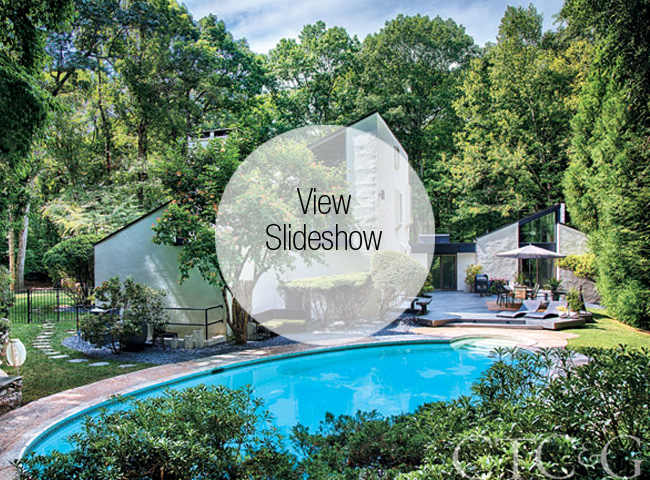 As a Grammy Award–winning rock guitarist and accompanist to the late Johnny Winter, Paul Nelson is used to striking some pretty soulful notes on stage. But in his Fairfield County home that he shares with his wife, Marion Amundsen, who is his tour manager and sometimes “moonlighting designer,” the chords struck design-wise are melodic. “Both of us are extreme neat freaks,” admits Amundsen, who managed to oversee and expedite a gutting of the house and completion within three months. Rock concerts have lasted almost as long. “Everything in the house has its place,” she stresses. “Our tour schedules are so busy that it helps us relax at home if everything is in order.”

As for her methodology in reconstructing and decorating the interiors of a 4,100-square-foot home in a single season, Amundsen says, “It comes down to the fact that when an architect, interior designer and general contractor work on a project, one’s needs get in the way of the other’s. I may not have the official qualifications to do any or all those tasks, but I actually think up solutions before problems arise, plus we were present the whole time.”

The resulting transformation of their house satisfies them both. “We like simplicity,” notes Amundsen. “Where Paul is extremely contemporary in what he likes, I’m more of a comfortable-modern kind of person.” “Marion used her own ideas to make the house her own and our own at the same time,” explains Nelson.

The couple had been living just down the street when the house, dating from 1969, came up for sale in 2012. “The moment I walked down the driveway and saw the stucco ranch-style house, I said, ‘This is everything I have been longing for,’” recalls Nelson. “The open-floor plan means there’s an easy flow inside—the interiors are as exciting to me as an amusement park! I never get bored with any space.”

In keeping with the couple’s mutual penchant for clean lines and spare rooms, they chose an off-white palette that not only mutes the expansive, sometimes vaulting interiors, but also serves to highlight the essential geometry of the house. Ironically, the residence, often cited as an example of late Modernism, resulted from a sketch by a fifteen-year-old boy. “The former owners had a son who wanted to be an architect, and he drew his parents a sketch of what came to be this house,” says Amundsen.

As much as Nelson and Amundsen liked the overall original aesthetic, they did compose, in keeping with the metaphor of their professions, a new tune for the interiors. Among the more dramatic changes involved turning the original master bedroom into Nelson’s office, a space less about paperwork and more about hitting the right notes during composing and recording sessions. At the rear of the house, what was once a disheveled pottery studio has become, under Amundsen’s reconfiguration, the bright master suite, with immediate access to the deck and pool.

The dining room is decorated simply but effectively with a table and chairs and grid of display shelves from Ikea. “Within that grid,” explains Amundsen, “we’ve assembled and grouped lots of personal items, putting them on display in one place—everything from one of my grandfather’s carved sculptures to a lighter Paul brought back from a concert in Jamaica.”

In keeping with Nelson’s desire for “eye-candy” inside (meaning interiors that always delight), he took special care to decorate an interior courtyard area with Mexican pebbles. Their kitchen features various gathering areas, including an inviting eating nook where they dine together, beyond which is an outdoor eating area, and a pass-through equipped with stools.

The music that comes out of the house is true rock ’n’ roll, but when the guitars and amps are turned off, the rooms are calm oases. “This is a living thing,” says Nelson. “The house keeps changing, with people always coming in and out. But Marion has established that yin and yang balance that makes it feel perfect and finished.”

A version of this article appeared in the April 2015 issue of Connecticut Cottages & Gardens with the headline: Finding Perfect Rhythm.