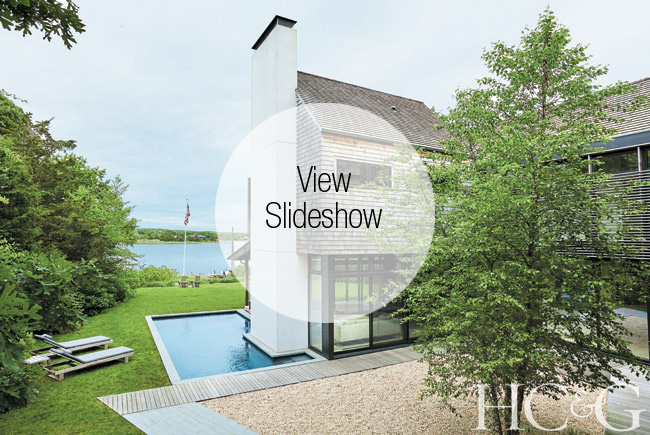 Morning runs have a way of clearing the head and exposing people to new possibilities, which is precisely what happened when Luke Babcock took off on an early a.m. jog one day in 2010. “There’s this great little spot down by the water that you have to see,” he told his wife, Allison, upon his return. The couple—she an interior designer, he a finance professional—had moved to the Hamptons from New York City in 2003 and had been living in a traditional house nearby. But they were eager to find a more expansive home for themselves and their daughters, Stallard, 13, and Lily, ten, and their two Labradoodles, Hobie and Gidget. They also wanted to create a home they could really call their own—built from the ground up.

The little secret Luke discovered is Morris Cove, a C-shaped curve not far from the heart of Sag Harbor Village, a ten-minute walk away. Luke had grown up weekending in the Hamptons, and the couple had always favored Sag Harbor—particularly Luke, an admirer of the town’s well-preserved, classic architecture. Finding a nook that hardly anyone knew about was just that more appealing.

Located on the site is an old boat launch, complete with a crane that once lowered vessels into the water and a weathered shanty decorated with whale cutouts. Allison’s first thought was to get rid of these nods to the past, but they eventually grew on her. (This stretch of Morris Cove was once part of an early-20th-century vacation home development, later felled by the Depression.) Vintage boat launch notwithstanding, creating a contemporary home that melded Allison’s modern sensibility with Luke’s traditional tastes was not for the faint of heart.

After making a few inquiries, the couple met with Blaze Makoid, an architect known for a cool, clean-lined aesthetic who just happens to live down the street. Allison was convinced that Makoid could achieve the right compromise and “told Luke he should go see Blaze’s house,” she recalls. “My husband practically lives outdoors, and Blaze has this amazing outdoor shower. As soon as Luke saw it, he was sold!”

The mandate for the Babcocks was that they were willing to go modern as long as Makoid could incorporate more classic architectural elements into the design. They also had a wish list, “with outdoor living at the top,” says Allison. “They were very involved,” recalls Makoid, “even down to the finishes and material selection. But the primary idea was always to extend their time outdoors.”

The house comprises three primary volumes arranged around an interior courtyard, with one leg parallel to the water, enclosed almost entirely in glass, another forming the front of the house on the street side, and the third connecting the other two. “I wanted them to be able to go from the street to the pool on one path,” Makoid says. “And when they enter the house, they can see the water all the way from the front door.” Unsurprisingly, Allison adds, “our favorite rooms are the back porch and the great room. The sun sets directly across the water, so we get extra daylight. It’s really beautiful.”

Spanning three levels, with four bedrooms, four baths, and two half baths, the 3,800-square-foot home is barn-like in appearance but completely 21st century—a “genius” layout, says Allison, who completed the decor. Since going out on her own, the classic training she employed while working for the venerable design firm Cullman & Kravis has evolved into a more serene approach. “I like to mix interesting pieces together and create a look that will still be fresh in ten years,” she says. “The decor is very specific to our family. As a friend of mine said, ‘You’ve made modern comfortable.’”

A version of this article appeared in the August 15 2015 issue of Hamptons Cottages & Gardens with the headline: Hidden Gem.