Tour the Home and Studio of an Art-World Power Couple 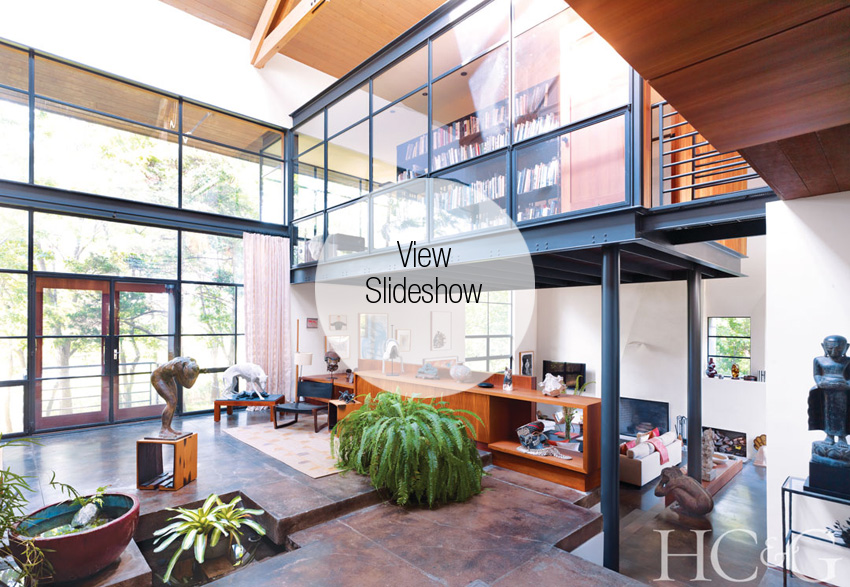 In a clearing in the woods of North Haven, tucked between the tranquil waters of Fresh Pond and a scenic marshland, artists April Gornik and Eric Fischl have created a magical wonderland of their own, where nature is front and center. The art-world power couple traded in “grossly gray” Manhattan, as Gornik describes it, to live and work surrounded by woods and water in a five-acre compound designed by their longtime friend architect Lee H. Skolnick.

Here Gornik and Fischl can glimpse swans, herons, and egrets from the towering glass walls of their twin studios, which overlook the pond. A tiny deer the pair have nicknamed Runt comes unflinchingly close to the kitchen’s steel-mullioned windows, nudging a birdfeeder to tip the seed into its mouth. “Our deer aren’t afraid of us,” jokes Fischl, who recently published a memoir titled Bad Boy and is planning a show of new paintings in London this fall and a February exhibit of works on paper at Vienna’s Albertina museum. “Like all of the Hamptons,” he says, “even the deer have become gentrified.”

Gornik, who is working on a book of drawings and planning an exhibition at New York’s Danese gallery, spends time photographing red-bellied woodpeckers and other birds alighting the feeders and, especially, tending to a lovely courtyard garden between the studio wing and the main house—which deer are deterred from entering by a broad flight of concrete stairs. Gornik indulges her passion for gardening in a soft, gently manicured landscape that, like the house itself, feels a little Asian-inspired, a little Mediterranean-influenced, but not out of place in the Hamptons. It’s a nice counterpoint to the wilder native forest of cedar and oak beyond the property’s borders. Although the views from their studios are stunning, “I try not to sit and stare,” says Gornik, “but I do like it completely quiet in the studio, so I can just listen to the birds while I work.”

Skolnick’s design, which draws on an eclectic mix of Japanese, Mediterranean, and Arts & Crafts architectural styles as well as the rustic barn vernacular of the East End, embraces nature and coaxes it inside. He designed the house as a series of semi-detached, multilevel stucco pavilions with welcoming gardens, terraces, and patios woven between them. “The house is not an object,” says Skolnick, who has designed homes and studios for many of Gornik and Fischl’s peers, including artists Susan Rothenberg, Bryan Hunt, and Toni Ross and late art historians Robert Hughes and Robert Rosenblum. “There’s a choreography to moving through the site. The project was about creating an environment within the site as well as looking out from it.”

Positioned along the formal approach to the main residence—which lies uphill, beyond the couple’s studios and the courtyard garden—is a Roman-style impluvium. The small sunken pool catches rainwater from an opening in the roof between the studios and directs it down through a channel carved into the concrete steps. It’s a dramatic focal point during summer rainstorms as well as winter snows, when giant icicles form along the perimeter of the rooftop oculus.

The main house has the airy, light-suffused feel of an artist’s loft, but its multiple levels, connected by hefty concrete steps winding up and down, make it feel like a ramble through hilly woodlands. A water feature tucked under a mahogany staircase in the foyer fills the house with the sound of running water, reverberating off the towering ceilings and floors of waxed concrete. Fischl calls the water element “a cultivated, natural thing. I like that it continues the flow of the stairs and makes an abstracted waterfall feel like a more literal one.” In addition to the expanses of concrete, the interiors feature expertly crafted mahogany built-ins and subtly tinted stucco—“nothing shiny, nothing polished,” says Gornik.

There is one noticeably polished element: a library contained within a pristine glass and steel box that hovers daringly above the living room. Inside are cast-iron shelves, designed by Stanford White for a 19th-century library in Connecticut, full of novels and “gardening books by the truckload,” says Fischl. But even from this pristine floating room, the beautiful marshy landscape outside feels close enough to touch. Gornik and Fischl’s home is a harmonious blend of architecture and the surrounding landscape, where nature is never out of reach.

A version of this article appeared in the August 15 2013 issue of (HC&G) Hamptons Cottages & Gardens with the headline: Artfully Orchestrated.