Tour the Hudson Valley Farmhouse of a Cosmetics Executive 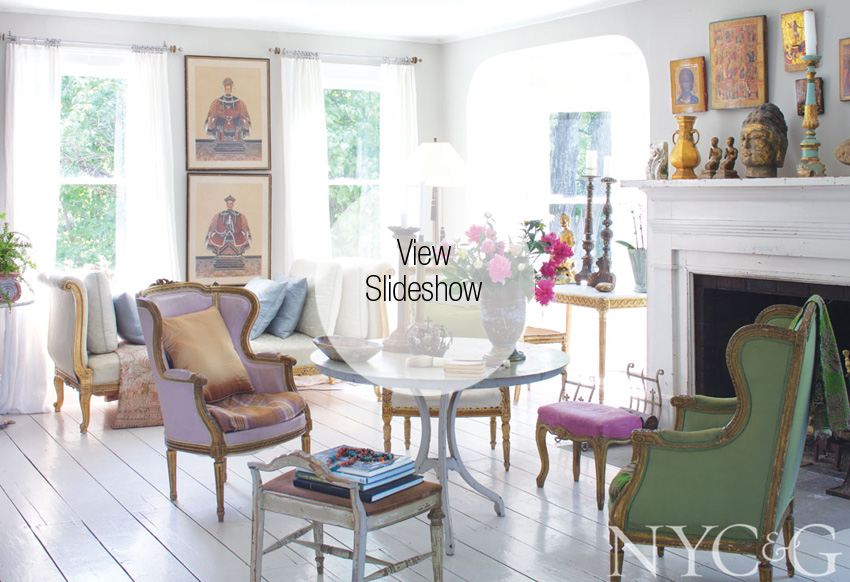 Gun Nowak doesn’t have a lot of information about her humble Victorian farmhouse in Germantown, New York, where it perches prettily on a rise above the verdant Hudson Valley. “It was built in 1870,” she says, in her charming Swedish-accented English, “and a woman called Dorothy had passed away there before I moved in. She was very old, and her husband had been a farmer. It is all I know.”

But Nowak knows a lot about many other things. For starters, she is the founder and CEO of Face Stockholm, a niche cosmetics brand that’s distinctive for its minimalist packaging and modern colors. Nowak, who once owned a smattering of successful fashion boutiques in the Swedish capital, fell into the cosmetics industry in the 1980s, when she couldn’t find certain makeup colors she wanted. She launched her own private label, and soon the small business grew into an international sensation beloved by the beauty cognoscenti and countless celebrities, from Jennifer Aniston to Madonna to Britney Spears.

Over the years, Nowak has resisted buyout offers in order to keep the indie label true to her vision. And that’s how Hudson, New York, just a short drive from her house in Germantown, comes into the picture, as the world headquarters of Face Stockholm, which maintains an office and a flagship boutique in a historic building on trendy Warren Street. “We bought the building so we could spread out,” Nowak says. “And then I fell in love with my house. My daughter found it for me. She said, ‘You need a mortgage. You are American now.’”

But why Hudson? Nearly 25 years ago, Nowak’s daughter, Martina Arfwidson, who is the president of Face Stockholm, had fallen in love—both with the Hudson Valley and with her now-husband, David Weiss, a chef and restaurateur. “I couldn’t understand why she wanted to move here, being a young Swede and living in New York City, but the idea grew on me,” recalls Nowak, who hopscotches frequently between the U.S.—where she spends time with her daughter and grandchildren, Theodore, 11, and Nikita, seven—and Sweden, where her second husband, Jan Nowak, an orthopedic surgeon, lives. “I’m always liked,” she jokes, “because I’m not in one place all the time.”

After making some initial major modifications to the house, which she bought in 1999, Nowak has tried not to do too much more. “I ripped out all the walls I could and built a fireplace,” she says, “but I can’t take it too seriously because I’m away a lot.” Instead of redecorating, she adds, she just drags the (mostly Swedish, antique) furniture from room to room according to whim. A small upstairs bedroom has been transformed into a walk-in closet, with racks of silk, cotton, and linen garments in black (the only color she wears). She is considering changing some things, like the vibrant floral fabric on a pair of love seats in the sitting room. “If someone had told me I’d have flowery things one day . . . ,” she says, trailing off in disbelief. “I want to reupholster them, but if I do, then I have to re-do everything.”

In addition to the abundant furnishings are the religious objects she is drawn to: Buddhas, statues of saints, ceremonial necklaces, and prayer beads, arranged virtually everywhere on shelves and tables. Many were picked up on her travels, especially during her years in the fashion business. Nowak still goes to India every year to visit a monastery. “A Tibetan monk who stayed at my house laughed at me because I have a little of everything, every religion,” she says. “But I feel safe that way.”

She’s usually not one to take the safe path. Nowak opened her first Face Stockholm location in Manhattan in 1990, after she and her daughter, who was in New York studying musical theater, walked by an empty storefront. At its peak, the company had some 200 locations around the globe, but after restructuring, Nowak runs a tidy empire of just 14 stores, as well as shop-in-shops worldwide. The company currently collaborates with Scandic Hotels on a collection of hair and body products (she’s proud of the tons of plastic saved by the minimal packaging), with Reebok Classic on shoes in pastel eye-shadow shades, and with Skeppshult Bikes (two-wheelers inspired by her nail polish colors), among other ventures. “There’s so much great makeup in the world,” she says. “You have to sell more than makeup.”

If Nowak could bottle her Hudson Valley lifestyle, it would sell like hotcakes. When she’s in residence, she Skypes with Sweden a few hours daily from her home office—scented in the spring by billowing white lilac bushes outside the window—then goes into town to the shop. On her 12 acres in Germantown, there are several places to sit and enjoy the vistas of fields, forest, and a little pond where she canoes and swims with her grandkids. The shadowy Catskills loom in the distance, with the Hudson River coursing through the valley below. Cascades of old roses surround the house, and she has even planted a mini orchard of apple and peach trees. She still doesn’t know that much about her house, but she knows that she made the right move. “You have to follow your gut feeling,” she says, “and you have to be a little wacky, too. I’m having fun.”

A version of this article appeared in the September 2016 issue of NYC&G (New York Cottages & Gardens) with the headline: A Hus on the Hudson.