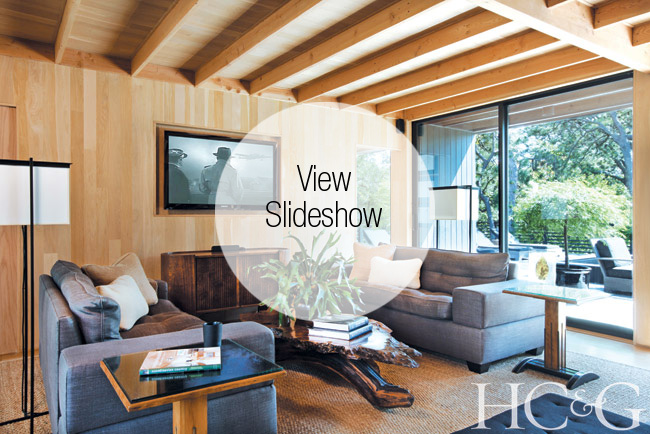 The hamlet of Fire Island Pines has earned a reputation as party central, and for years, decorator Rob Southern and his best friend, Bill Melnick, took short-term summer rentals in typically raucous houses. But when they began fantasizing about owning a small place to share there, the challenge was to find something a bit quieter. Trespassing is as ubiquitous on Fire Island as socializing, and one day Southern stumbled on a down-at-the-heels house at the end of a little-trafficked lane. It had the potential to become the laid-back double bachelor pad he and Melnick wanted, and it even had a design pedigree.

Florida-born architect Horace Gifford, whose cedar-and-glass vacation houses helped define the look of the popular beach community, built the structure in the 1960s. But despite its provenance, the property was perhaps even too decrepit to be featured in Fire Island Modernist, the recent monograph celebrating Gifford’s local masterpieces. “It didn’t look like much,” confirms Melnick, a senior vice president at Ralph Lauren. At night, he reports, stars were visible through holes in the beamed ceiling, and a power pole rose like an extended middle finger just outside the front door. “It was scary,” Southern adds with a shudder. “I mean, scary.”

Undaunted by the work ahead of him, Southern was blessed with Melnick’s unerring trust, as the decorator had previously designed Melnick’s getaway in Upstate New York as well as his city apartment. Renovation began with high drama, when their contractor cut the house off its pilings to float it more than six feet off the dunes. Though Melnick was “way too nervous to watch,” he now admires how the formerly low-slung structure gained the stature of a tree house. The effort proved prescient, too, when Hurricane Sandy dumped four feet of water in the yard. The landscaping languished under water for weeks, but the interiors remained unscathed.

Gifford had clad the rooms with cedar planks, but Southern found the species too pink, so he “slipcovered” the walls in white oak that matches new floors and ceilings. His friend Edward Wendt, who teaches architectural history at Pratt Institute, drew the plans for new mirror-image master suites that bring the footprint up to 1,200 square feet and raise the number of bedrooms to four. Now each housemate has his own private suite that includes a luxurious bath with a black vanity fashioned from an Ikea kitchen cabinet.

Like many houses in the Pines, the bedroom suites are entered from outdoors—in this case via “secret” doors sheathed in the same siding as the exterior walls. Southern pushed to stain the exteriors dark. “I didn’t want black at the time,” Melnick recalls, “and there was definitely arm-twisting, but Rob was adamant so I rolled the dice.” Southern calls black “the great neutral” and used weatherproof black acrylic canvas on the mattress covers in the guest bedrooms as well as on the deck chairs outside.

The friends spend summer days lounging around the pool; at dinnertime, their guests move inside to sit on vintage upholstered dining chairs Southern found at a flea market. The chairs have had many lives, traveling from his New York apartment to Miami and back, each move providing an excuse to reupholster. Now clad in a rustic beige linen, they fit seamlessly into the great room, which Southern decorated in shades ranging from “super-dry sand to wet.” If a guest tracks in a bit of the beach, no one is the wiser.

A version of this article appeared in the December 2013 issue of Hamptons Cottages & Gardens with the headline: Island Escape.