Tour the Sagaponack Home of an Artist and Fashion Designer Couple 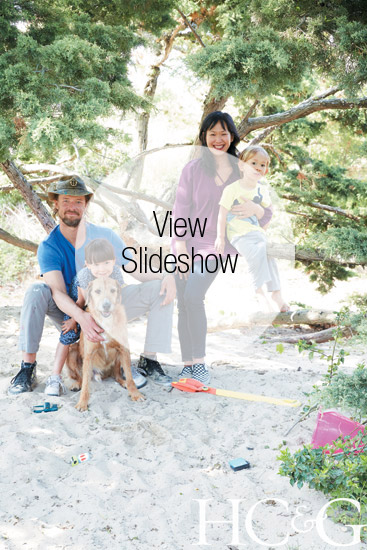 It takes rare vision and prodigious creativity to carve a family home out of a former cinderblock factory, especially one on a steeply sloping Sagaponack lot that had once been quarried for sand.

The unprepossessing property came on the market following the 2005 death of David Porter, an artist and key member of the Jackson Pollock/Willem de Kooning circle, and of his wife, Marion, three years later. (The couple founded the annual Box Art Auction that benefits the East End Hospice.) The Porters had purchased the factory decades before and added a barn, brought to the site from Bridgehampton. By the time Curry and Suh, who had been living in a five-story walk-up apartment in Manhattan, bought it as their full-time residence, in 2009, says Curry, “the only inhabitants were raccoons.”

Keeping just the hefty ceiling beams, a metal spiral staircase (which they reinstalled outdoors, connecting upper and lower decks), and some framing, they gutted the two derelict structures and reconstructed them with new materials on a similar footprint. The original factory building, now clad in cedar shingles, comprises the family’s main living space and an open kitchen, with children’s bedrooms and a master suite upstairs. An adjacent garage, faced with horizontal mahogany decking, contains a guest suite as well as room for cars and surfboards. The old barn evolved into Curry’s studio, with massive walls of glass that look toward the west. A new two-story passageway joining the original factory building and the barn continues the mix of materials, with diamond-shaped metal shingles above and steel-and-glass garage doors below that can be raised to create an open breezeway. Even a 30-foot-tall window recycled from an Abercrombie & Fitch store has been worked into the design, along with patios made of old brick reclaimed from the site and painted white.

Ambitious as the architecture of the house is, the grounds are equally impressive. “I wanted this to be the Fallingwater of Sagaponack,” says Curry, who was raised in western Pennsylvania and dreamed of becoming a landscape architect before switching to film and then painting, sculpture, and ceramics. One of the first things Curry did upon purchasing the property was buy a Bobcat tractor and re-shape the site’s topography. He created berms for flood-proofing and privacy, fashioned a tiered rock garden with 100 tons of limestone from upstate New York, transplanted existing oaks, cedars, bayberry, and rhododendron, and carved out space for a level lawn, where the couple’s two children, Cybelle, almost six, and Mason, nearly three, can romp.

While Curry was “100 percent involved” in the design of the new dwelling, Suh’s input was also vital. A fashion-industry veteran who last year launched Loyal Hana, a clothing line targeted to nursing mothers, Suh says her Korean ancestry informs her strong feelings about home and family. She wanted, above all, “lots of welcoming, unintimidating common spaces for family and friends to congregate—and a big platform to put food on.” (Suh loves to cook—her specialty is creative pizzas.) She got her wish with an oversize stainless-steel counter dividing the kitchen from the main living area, which makes up for the lack of a formal dining room—or dining table, for that matter. “When we throw parties, people grab a plate and find their place.”

The couple share a desire for an informal, nontraditional lifestyle. “Like a lot of artists, Quentin yearns for less structure and more freedom,” says Suh. “I’m kind of the same way.” The children benefit, too. Theirs is an idyllically kid-friendly abode, complete with a skateboard half-pipe, a graffiti wall, a natural “sandbox” under some trees, and a living room furnished with a pair of swoopy freeform sofas seemingly made for bouncing and sprawling.

Curry and Suh are not done yet. As their family grows, along with Curry’s success as an artist, they’re building a larger house on the same 2.3-acre parcel, again with Nilay Oza as architect. The present home will become a larger studio for Curry, although as far as he is concerned, the design of house and landscape are equally absorbing creative endeavors. As he puts it, “Every aspect of my life is my art.”

A version of this article appeared in the July 1 2015 issue of Hamptons Cottages & Gardens with the headline: Family Affair.