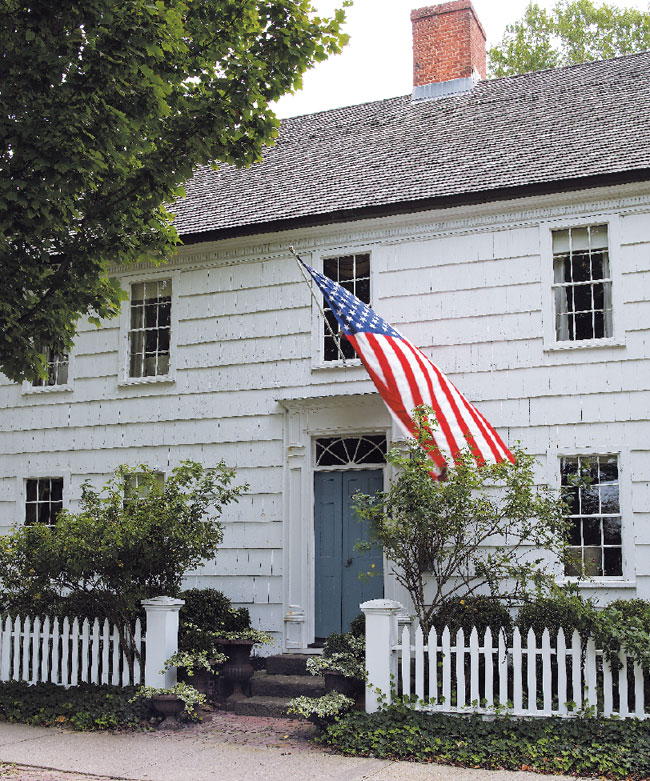 One autumn day 25 years ago, Elizabeth Lear picked up a heat gun in the largest room of the late-18th-century house she and her husband, Richard, had just bought on historic Main Street in East Hampton. Starting in one corner, she began stripping two centuries’ worth of paint off the original wood paneling that she knew lay somewhere underneath. Richard, an architect who died in 2004, wielded a second heat gun and started working his way around the room in the opposite direction. “We didn’t meet until February,” jokes Lear.

That was just their opening salvo on the timeworn, Revolutionary-era beauty, which was filthy and neglected, but still an extraordinary, virtually unspoiled example of colonial architecture that had never been substantially modernized or renovated. The Lears went on, room by room, to bring the entire house back to nearly original condition. They stripped multiple layers of wallpaper from the hall above the stairwell—a narrow, twisty affair probably made by an itinerant carpenter—and ripped out grimy wall-to-wall carpeting. They painted black diamonds, a popular motif in early America, on the floor of the master bedroom, and fitted the house’s 6-over-6 windows (probably 12-over-12 in colonial times) with period-sensitive wavy glass. 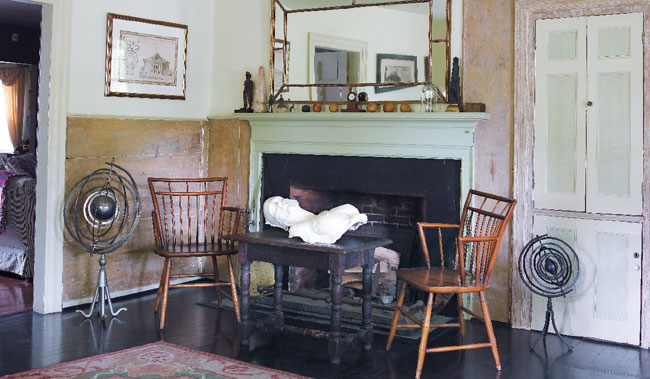 Though by all accounts their restoration efforts were thoughtful and well considered, one of their changes gained unwelcome notoriety: the removal of what Lear, a garden designer, calls “an ugly Victorian porch” that obscured the front door’s fanlight and entablature. The New York Times covered the flap that ensued, and the Lears ended up paying a $5,000 fine to the Town of East Hampton for removing the porch without permission. But there were no regrets. “We felt the house deserved to be restored to the late 18th century, not the late 19th century,” Lear says.

The main section of the home, built in 1770 by the Sherrill family, comprises two nearly identical parlors on either side of the front door; a cozy “birthing room,” now used as a guestroom; and the living room, which was the kitchen in colonial times (Lear has been known to roast lamb and squash in the enormous fireplace). Sherrill family descendants occupied the house until the 1950s, when a couple from Connecticut took up residence for two decades. It then stood vacant for ten years before the Lears bought it, complete with its contents, in 1986.

The Lears raised six children there, making full use of the four bedrooms and three baths, mostly in an 1850s addition that also contains the present kitchen and dining room. The house is furnished with antiques, many found in the attic and elsewhere in the house, and period-appropriate reproductions. “So much was here—wood chests, mirrors, china, fireplace implements . . . and a lot of junk, too,” says Lear. In the attic, the couple found Sherrill family photographs and correspondence; in a boarded-up fireplace, they uncovered a cache of hand-forged fishing hooks made from either ivory or bone. The ironstone displayed in the kitchen and the contents of a corner cupboard in one of the parlors—including 18th-century Sèvres porcelain and Limoges china—also came with the purchase.

Although the house now sits on just one of its original eight acres, it remains wonderfully evocative of the 18th century. But even Lear has made a few concessions to modern-day living, including a flat-screen TV in one of the parlors, tucked discreetly along a side wall. “Well,” she says, “you have to put the TV somewhere!”

This article appears in the December 2011 issue of HC&G (Hamptons Cottages & Gardens).