The Balvenie is the only single malt scotch still crafted the traditional. But not much needs to be said for this humble giant, a sip will speak for itself. 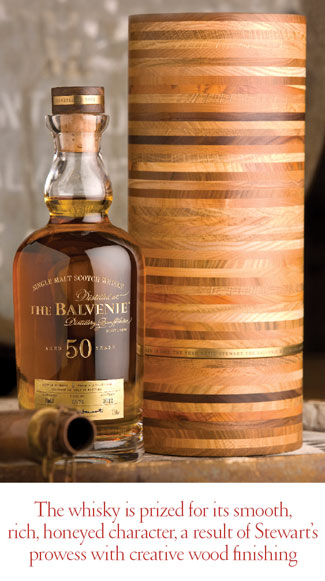 My first exposure to The Balvenie came at the highest level,
when I attended the exclusive U.S. launch of Scotland’s most-expensive-upon-release single-malt whisky. It had spent 50 years in European oak hogshead wood, cask number 5576. It would be the most precious liquid I’d ever imbibed, valued higher than Château Lafite, Penfolds Grange and Pétrus.

It was an electric evening, presided over by Malt Master David Stewart—who has been with the Highland distillery for as long as the Scotch itself, starting there in 1962. He led the group through its nosing, and then tasting, of the precious Balvenie 50, the distillery’s oldest release.

“On the nose, you’ll find vibrant citrus notes—lemon and orange peel—and a floral fragrance,” Stewart said. His understated style has earned him the moniker, “the modest man of whisky.” “Taste the sweet honey notes, the dried fruits, vanilla, butterscotch, toffee, almond and cinnamon,” he continued. “Notice the lingering citrus sweetness.”

The spectrum of flavors was vivid and layered. Balvenie 50 is available only in a limited edition of 88 bottles, each made from hand-blown glass, and packaged in a wood case constructed from 49 rings of handsome Scottish timbers. The price per bottle is an astonishing $30,000 apiece. Blame the exorbitant price on the angel’s share, the evaporation to the heavens that cost the cask 70 percent of the original liquid.

Had I ordered the dram I was tasting at one of the handful of specialized whisky bars that carry a bottle, it would have cost at least $3,000 a snifter. Who would pay such a bundle on a few little sips? The Balvenie’s brand ambassador informed me that he expected men celebrating a big birthday or casino win to pony up now and then.

The tasting provided the opportunity to discover not just the 50-year-old, but also more accessible expressions in the Balvenie range. The single-malt house is a rather humble giant in the whisky world, overshadowed by flashier brands like Glenmorangie and the Macallan, both known for extravagant marketing ploys (Annie Leibovitz photographed Scottish actor Kevin McKidd for a Macallan ad campaign).

From its home base in Dufftown in the Speyside region, Balvenie has been a consistent innovator in oak-cask treatment. The whisky is prized for its smooth, rich, honeyed character, a result of Stewart’s prowess with creative wood finishing. The DoubleWood 12 years old, for example, passes through two different casks as it ages, from a traditional oak whisky cask to a European oak sherry cask. The Balvenie Caribbean Cask matures in traditional oak whisky casks for 14 years, then is finished in rum barrels that impart toffee and sweet vanilla notes. The Balvenie’s complex and spicy Single Barrel 15 sleeps in an American bourbon cask that imparts honeyed maltiness and liquorice hints. Stewart’s marvelous experimentation is even more prominent in the DoubleWood 17 Year Old, the elder sibling of the popular 12 Year Old, but with deeper distinctive notes ranging from honey to peaty smoke.

The many expressions have all racked up awards for Stewart, Scotland’s single longest serving malt master, proud recipient of the British Academy’s Grand Prix of Gastronomy and the Malt Advocate’s Lifetime Achievement Award. His 21-year-old Portwood edition was named the World’s Best Spirit at the International Spirits Challenge. At the Balvenie, it seems, the whisky speaks for itself.

click here for some more sexy sipping from the baroness!