Under the White Tents: A Wrap-up of Hamptons Charity Party Circuit

Is it my imagination or do the sheer number of charity benefits in the Hamptons grow every year?  Hamptonites have a lot of choice where to bestow their hefty contributions. Will it be to support gardens (Madoo, Longhouse Reserve), art institutions (Parrish Museum, Watermill Center) or medical research (Sam Waxman Cancer Research, Super Saturday, Paddle & Party for Pink)? Or will they opt for an animal charity: saving the Asian elephants in Trunks of Love, Evelyn Alexander Wildlife Rescue or ARF’s Bow Wow Meow Ball, which takes in 1,700 dogs and cats into its adoption centers.

RIBS FOR KIDS
Chefs were aplenty this summer giving their talents for charity causes. The Chefs Care BBQ or “Ribs for Kids,” brought out marquee chefs Floyd Cardoz, Alex Guarnaschelli, and Jonathan Waxman. Michael Loeb was dubbed an honorary rib chef and hosted the charity at his spectacular Southampton beachfront manse, featured in “Billions” on Showtime. Some 20 chefs turned out ribs to benefit Pop.Earth, which supports holistic health programs for kids with developmental disorders. Guests washed down the ribs with cocktails made from sponsoring brands, Tito's Vodka and Blue Nectar Tequila, or sipped Perrier-Jouet Champagne.  The organizers, Loeb and Shu Chowdhury, CEO of the restaurant operating system SALIDO, raised $250,000 from the live and silent auctions. 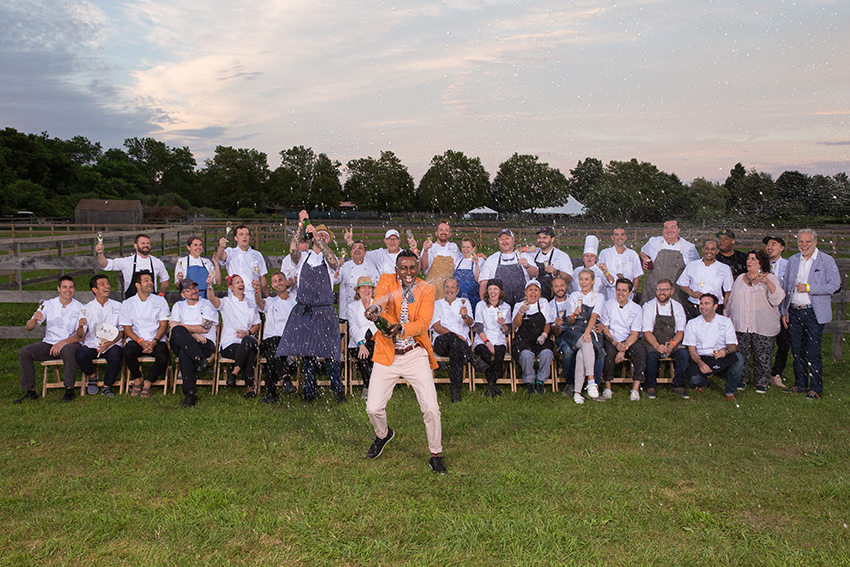 CHEFS & CHAMPAGNE
Over 1,000 guests came to Wolffer Estate Vineyard under a festive white tent, to celebrate the 27th edition of Chefs & Champagne to benefit the James Beard Foundations scholarship program. On this landmark year when Susan Ungaro, head of JBF for eleven years was stepping down, Marcus Samuelsson was honored, added him to the roster of honorees including Bobby Flay, Wolfgang Puck, Thomas Keller and Emeril Lagasse. Champagne Barons de Rothschild flowed all night and into the after-party, held at adjoining smaller tent when chefs got down with the guests. 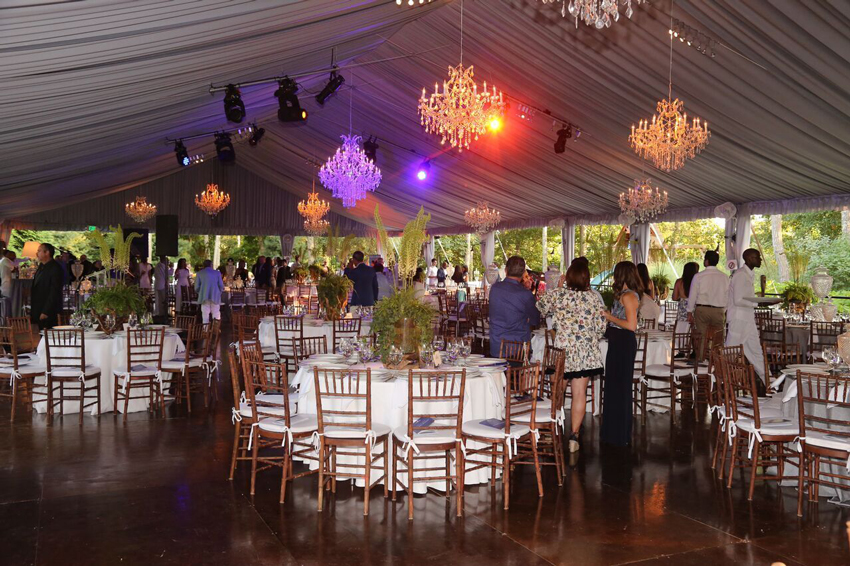 MICHAEL BOLTON CHARITIES
Those famous white tents, which signal the sites of Hamptons’ charity benefits, are getting fancier. This year’s most extraordinary tent design—ornate chandeliers hanging throughout the high-peaked white tent lighted in purples and pinks and draped in grey silk –was created for “An Evening Under the Stars,” Michael Bolton Charities which assists women and children at risk of domestic violence and human trafficking.  Over 300 attendees dined at a private estate in Sagaponack and watched a performance by Michael Bolton.

SUMMER’S DRAMATIC MOMENTS
As expected there were some mishaps. A Russian oligarch’s wife, Janna Bullock, held ARTrageous, benefiting children through art, at her beachfront manse on Meadow Lane in Southampton. On a side deck facing the dunes, a table, festooned with sunflowers, awaited the guests who paid up to $2500 to sit. The rain gods were uncooperative and the skies broke open halfway through the cocktail hour. Guests had to line up to fetch their own food in the kitchen. The moral of the story is when in the Hamptons invest in a white tent. At BOOM, the Cosmic Longhouse Benefit, the honored fireworks artist Cai Guo-Qiang could not stage his firework art piece because East Hampton wouldn’t issue permits– they raised $500,000 nevertheless. And at Ribs for Kids, the host allegedly punched an inebriated teenager, who had crashed the event for challenged kids. Finally, for those who had petty cash left after all the charity bashes, this summer featured exciting restaurant openings: Flagship in Montauk; Ron Perelman’s Bibloquet on Sag Harbor’s dock; and the incendiary EMP Summer House, Eleven Madison Park’s pop up in East Hampton. I am still dreaming about those buttery lobster rolls.