A Vacation Villa on the Greek Island of Milos

A modern home that's seamlessly integrated with its rugged environment. 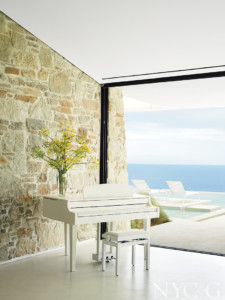 “No house should ever be on a hill,” Frank Lloyd Wright famously wrote. “It should be of the hill. Belonging to it.”

If ever a house belonged to a hill, it is this unapologetically minimalist vacation villa, built into the side of a hill on the Greek island of Milos. Perched some 250 feet above sea level, the home offers uninterrupted views of the Aegean from every room.

Designed to make as little impact on the landscape as possible, the structure is far larger than it seems, totaling 12,000 square feet between two wings. In the main part of the home, four primary spaces open directly onto a 100-foot-long freshwater infinity pool: the kitchen and dining area, living room, master suite, and a second bedroom and bath. Set at an oblique angle to the west are an additional four en suite guest rooms. There are also housekeeper’s quarters, a gym with a sauna, underground parking for six vehicles, and a small elevator.

The house belongs to Belgian insurance executive Pierre Lefèvre and his family, who recently relocated to his native Brussels after 10 years in London. Widely traveled—he has also lived in Paris, Rome, and Shanghai—Lefèvre spent three years looking for a vacation getaway in an absolutely tranquil, unspoiled environment, with views of the sea.

Although it is no longer difficult to buy land in Greece, it isn’t easy to find land to build on. There are 220 islands in the Cyclades, and Lefèvre visited a lot of them. The island needed to be big enough to have some creature comforts, but not so big that it would attract tourist hordes. Milos, where the Venus de Milo was unearthed in 1820, is about the size of Staten Island and can accommodate small jets at its tiny airport.

Finding the ideal location was challenging, Lefèvre recounts, “because you can’t build in places that have never been inhabited. Then, in addition to finding buildable land, you have to be able to access it without crossing your neighbors’ property.” Another caveat: The Greek electric company needs to agree to connect a parcel to the grid.

As it happens, the Greek government, which carefully guards the ancient nation’s hardscrabble beauty, has recently made construction of a certain kind of home much easier. So-called bioclimatic houses sit largely underground. “Although they are expensive,” says Athens-based builder, contractor, and real estate agent Atalanta Rossolimos, “they are not difficult to construct. You excavate the land, build the house, and then replace the earth.” And they come with coveted concessions, too. “Bioclimatic houses can be much bigger, and you can also have much larger expanses of glass.” The maximum window dimension in the earthquake-prone area is 1.5 meters, about five feet. The largest expanse of glass in the Lefèvre house is 10 meters, almost 33 feet. 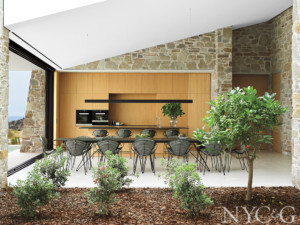 In the course of his quest for the perfect tract of land, Lefèvre met an architect and hired him to design his vacation home. The plans were drawn, submitted, and approved, although the two soon parted company. Happily, Lefèvre had also met Rossolimos, with whom he joined forces to get the job done.

Rossolimos’s Athens-based business, Ant Aftou, “means ‘instead of,’” she instructs, a Greek phrase used to denote delegating a task to someone else. Rossolimos offers a host of services to foreigners who wish to buy and build in Greece, everything from design to securing the subcontractors, a logistical challenge on an island where everything has to be brought in. “Atalanta had fantastic ideas about the design,” says Lefèvre, “and we made so many changes to the original that we had to resubmit the plans.”

Among the major decisions: choosing the primary stone. Milos has two types of local building stone, a dark one that is less durable, and a sturdier one that is bright white. Lefèvre and Rossolimos decided on a rich, gold-toned stone from nearby Sifnos and hired a crew of stonemasons to install it on site.

Although the house is subterranean, it’s not at all bunker-like. The ceilings follow the slope of the hill, rising from the maximum allowable 9.5 feet at the pool to more than 18 feet at the top of the living room’s main staircase. Large skylights provide natural light throughout. And there are even planting beds indoors, where calamondin orange trees grow alongside Metrosideros, a red-flowering evergreen of the myrtle family. But nothing has been planted outside the house, where wildflowers and aged pines dot the hillside. “I did not want to have any gardens outdoors at all,” Lefèvre says. “I was intent on preserving the natural lay of the land.”

“The architectural guidelines in the Cyclades are strict,” Rossolimos adds, “and they safeguard the beauty of the islands. But if you know what you’re doing, you can still build something spectacular.”

The print version of this article appeared with the headline: Grecian Formula.