Venture to an Upstate Getaway with Beautiful Greenery

A gardener in Claverack pieces together paradise, with an eye toward the bigger picture. 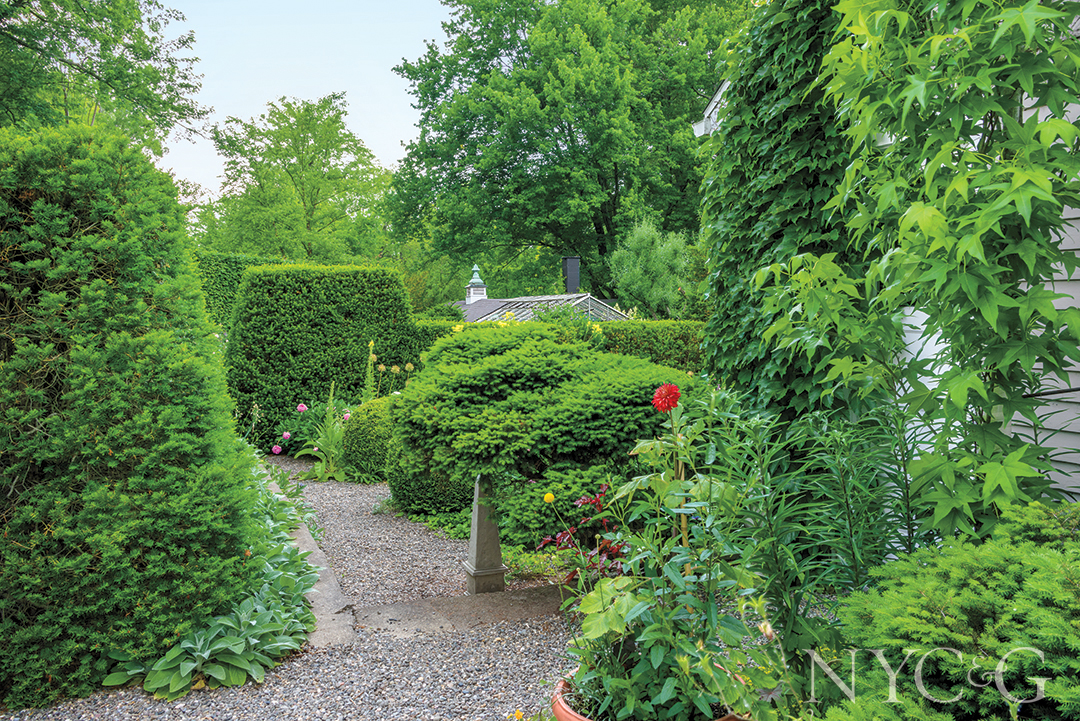 Originally, the purchase was strictly a temporary move for Peter Bevacqua and his husband, Stephen King, with a bigger, quieter Upstate getaway as the end goal. “What we really wanted was an old house on an isolated road,” says Bevacqua, conceding that the property they settled for in 1988 fell short of ticking all the boxes on the couple’s wish list. Nevertheless, the slender plot in Claverack was not without its charms. Both Bevacqua and King were creative directors in advertising at the time, but Bevacqua had a keen interest in gardening, and King moonlighted as an artist. For Bevacqua, the property’s primary enticement was a swank 1950s Lord & Burnham greenhouse; for King, a basement that could be kitted out as an art studio proved to be seductive. Despite these endowments, the pair remained lukewarm in the commitment department for years, often going “on a real estate hunting spree before starting each new project,” Bevacqua says.

Even so, the home continued to evolve. The property grew to two acres with the addition of a Sears kit house on an adjacent parcel next door, purchased in 1996, and Bevacqua’s gardening hobby subsequently took on a life of its own. What really turned the tide was a 10-day seminar at Great Dixter, the fabled British estate of horticultural icon Christopher Lloyd. “I was so energized by its blocky clipped topiaries and clouds of billowy perennials,” Bevacqua recounts. “I wanted to replicate that juxtaposition here.” The couple’s first project: a sunken garden behind the newer part of the property. When purchased, it was a fussy cottage garden without definition. Bevacqua and King doubled its size and planted a series of clipped shrubs surrounded by a frothy sea of euphorbias, columbines, peonies, lilies, and other perennials, creating a “room” with a strong sense of mood and imagination.

From there, more gardens grew. King laid a brick path leading to the greenhouse (“I’m all about hardscaping and edging,” he says), which Bevacqua lined with sharply clipped ‘Red Pygmy’ barberry, Physocarpus ‘Summer Wine’, and Rosa glauca in front of a hornbeam hedge. Bevacqua had read an article about Belgian landscape architect Jacques Wirtz’s signature irregularly sculpted cloud hedges and “was gobsmacked,” he recalls—so much so that he began creating his own serpentine cloud hedge of boxwood to replace a “mangy” rose border. Next, he crafted a double mixed-hydrangea border to snake behind it and, against the road, layered a blowsy shrub border of Spiraea ‘Ogon’, Abies koreana ‘Silberlocke’, fringe tree, viburnums, and various hydrangeas.

Now well on his way to becoming a bonafide garden designer himself, Bevacqua initiated further experiments, encouraging sedums and alpines to sprout from a gravel terrace behind the house and accenting another terrace with a swoosh of Panicum ‘Shenandoah’, an ornamental grass. His state-of-the-art forays soon won him commissions, and he made a permanent break from his advertising career in 2005. Bevacqua and King recently acquired another abandoned half-acre, which they are converting into a “nearly native” meadow with beehives and masses of indigenous pollinator-friendly plants such as Joe Pye weed, winterberry, milkweed, baptisia, asters, goldenrod, and grasses. Wide paths wind through the dense plantings, and randomly placed ‘Emerald Green’ arborvitaes serve as exclamation points to lend structure. This wild and woolly work in progress is now part of the flow beside the more edited, established garden, newly tantalizing from every corner. Bevacqua and King may not have the resources of Great Dixter, but what they lack in climate and location, they make up for in vision.

The print version of this article appears with the headline: Upstate Idyll.
Subscribe to C&G

How To Create The Best Cutting Garden

Get ready for top designers to transform the historic Wooley House into a decorating masterpiece.