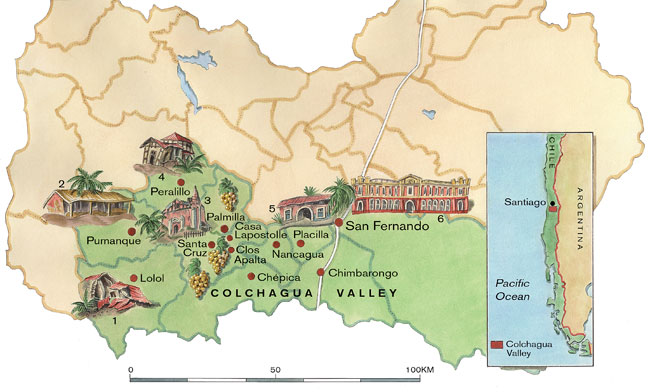 widespread damage
This is just a sampling of the many structures in need of restoration throughout Colchagua Valley.

Rivers of wine streamed down craggy roads lined with grape vines and surrounded by mountains. At Casa Lapostolle, 350,000 bottles shattered as scores of oak barrels rolled off their rackings. It was February 27, 2010, in the Colchagua Valley, Chile’s main wine region. An 8.8 magnitude earthquake had just rippled in from the coast where a tsunami had caused considerable havoc. With tremors lasting 90 seconds, the earthquake turned out to be among the country’s most destructive—third only to the Valdivia quake of 1960, which registered 9.5. Afterward,  seismologists noted that it might  have shortened the day’s length by  1.26 microseconds.

Casa Lapostolle owner Alexandra Marnier-Lapostolle, whose great-grandfather founded Grand Marnier, had been traveling in Texas when the earthquake hit. She hopped the first available flight to Chile a few days later. “When I arrived, the main roads were not passable—bridges had collapsed and you could see places where the earth had literally opened up,” she recalled. “The markets hadn’t gotten shipments. There was no food, no water.” She immediately organized private trucks to travel the back roads from Santiago,  ferrying food and supplies to her 150 winery workers. “On my first night, we had four aftershocks,” she said. “Aftershocks make you realize that there’s something huge in the center of the earth.” Powerful tremors continued for weeks—for months, in fact—while most of her workers, afraid to stay inside, remained camped outside their homes throughout the valley.

With the strong aroma of spilled wine permeating the surrounding hillsides, she surveyed the damage to Casa Lapostolle’s main buildings (a second newer winery, Clos Apalta, was earthquake resistant with subterranean barrel rooms). “My oak barrels were tightly racked so they all moved together like  dominoes,” she explained. “Only a small number cracked open. We were lucky: We only lost about 15 percent of our wine.” Still, it took two months to restack the barrels and clear away the shattered glass.

After attending to her personal losses, Marnier-Lapostolle took stock of the overall damage to the surrounding wine region. While the Chilean government and relief organizations (most effectively A Roof for Chile, which funded 40,000 emergency shelters) seemed to be responding well to the human toll, historic landmarks were mostly being neglected. 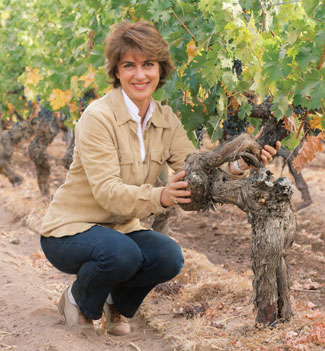 The French-born heir to the Grand Marnier liquor portfolio has always focused her philanthropic energies on cultural causes. Her  family’s Grand Marnier Foundation hands out some $200,000 per year to French and American arts institutions, including Lincoln Center and the Harlem Biennale. And just weeks before the Chilean tremors, calamity struck another far-flung corner of the family business, when a 7.0 magnitude quake devastated Haiti—orange groves there are sourced to make Grand Marnier. To aid in the Haitian relief effort, Marnier-Lapostolle sent a check to the Red Cross for $150,000. Now that disaster had landed in her own backyard, she and a group of influential friends, including other winery owners, began raising funds—as the Corporacion Patrimonio de Colchagua—for a massive effort to restore and rebuild important cultural landmarks.

“With its beautiful adobe architecture, Colchagua is the most historic  valley in Chile,” she said. “We had to do something to save the old colonial homes, historic haciendas and churches.” She enlisted Roberto Benavente, the architect behind her new winery and an expert in adobe structures, to lead the reconstruction effort.

Benavente is well known for his work in museum restorations in France, most notably the Natural History Museum in Paris. From his office in Santiago, he (with the help of University of Chile students) began tracking down the original blueprints for damaged structures. “Adobe construction, which is mostly earth, suffered enormous damage,” he said. His team, applying higher seismic standards, hopes to complete the first reconstruction projects by this summer.

Marnier-Lapostolle and other members of the Heritage Foundation have earmarked funds for specific structures. They hope to take on the region’s oldest historic hacienda—now a museum—in the village of San José del Carmen de El Huique. Featuring 20 tiled courtyards, galleries, sculpture gardens, and 19th-century period furniture, the clay-tiled  hacienda was declared a national monument in 1971. “The hacienda is  the only living witness to farming life in the 1800s,” she said, “a vital part of the region’s cultural heritage.”

"We had to do something to save the old colonial homes, historic haciendas and churches."

She first fell in love with Chile when she traveled there in the early ’90s with renowned wine consultant Michel Rolland. Later she bought 690 acres in Apalta, a hilly, arid sub-region of the Colchagua Valley. Her first production at Casa Lapostolle was in 1994. In 2008 her top cuvée, Clos Apalta, was chosen as Wine Spectator’s No. 1 wine in its annual 100 list—an honor that put Chile in league with the world’s top wine producers.

After last spring’s healthy wine harvest, life began returning to normal in the Colchagua Valley. Andrea Leon, winemaker at Casa Lapostolle, reported that blending the new vintage gave her the feeling of a fresh start. But an underlying sadness remains. “It’s disheartening,” she said,  “to travel through Santa Cruz and see those empty spaces where the lovely old colonial houses once stood.”

Aftershocks, which continued for months, have delayed reconstruction throughout the valley. And there will be a communal vote on which historic landmarks in Santa Cruz will be first in line for reconstruction. Although rebuilding is slow, the region’s cultural heritage will not be lost.