Welcome To The People’s Project

14 Connecticut designers (and artisans, contractors, painters and products) give the Governor’s Residence a modern-day makeover 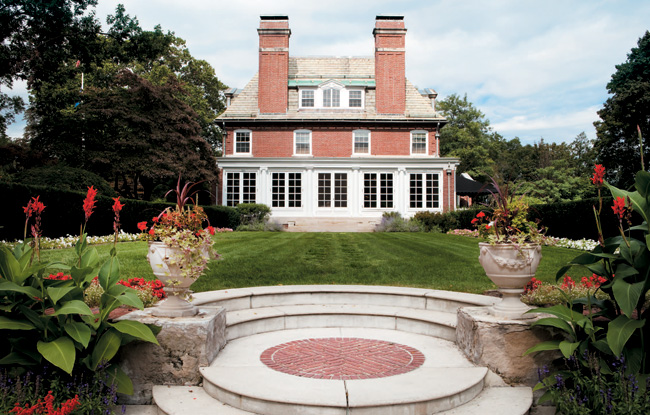 990 Prospect Avenue | A veiw from the garden at the Governor's Residence in Hartford, CT.

In celebration of the Residence’s 100th anniversary, Connecticut Cottages & Gardens and the Governor’s Residence Conservancy, a private nonprofit group, hand-picked a team of world-class designers—all with ties to the Nutmeg State—to preserve and refresh its public areas, including the pool house and guest cottage. The stunning transformations on the pages that follow are a real breath of fresh air; they give the Residence just the touches needed to restore it to its former glory. Each room not only befits a state’s chief executive and his family, but also sets a welcoming tone for all who cross the home’s esteemed threshold.

Call it a page taken straight from the Gettysburg Address: “Of the People, By the People, For the People …” Every stitch of upholstery, every brush of paint, every custom piece of furniture— everything that didn’t already belong to the Conservancy—was supplied in kind by Connecticut companies, contractors, decorative painters, upholsterers and more, in the hope of turning the Residence into a respite enjoyed not only by the governor, First Lady and their children, but by the general public, too.

Designed by Boston-based architectural firm Andrews, Jacques & Rantoul for Hartford industrialist and physician George C.F. Williams, construction on the Residence broke ground in 1909. Situated on the corner of Prospect and Asylum avenues, and serving as the boundary between Hartford and West Hartford, this substantial brick home was built in the popular Georgian Revival style, with a hip roof, single-bay porch, rectangular plan and staunchly symmetrical facade, all typical of the day and the region.

In 1943, the handsome property at 990 Prospect Avenue, a mere three miles from the Capitol building, was acquired to house Connecticut’s first family, and to host official functions. Wartime goings-on and the building’s location and design were said to offset a more open-door policy, and caused the Residence, shrouded by tall trees and set back 200 feet from passing traffic, to remain largely a private building.

Since that time, however, the Residence has opened itself to guided public tours and social functions for state residents. While it now boasts 15,000 square feet of living space, a pool, 19 rooms and 9 fireplaces on a pared-down four acres, the work of preserving the history of the home has been an ongoing process undertaken by the Conservancy.

While the Residence has undergone several remodels (the first in September 1945, and most recently in 1992), arguably no couple has been more excited about updates than Governor Dannel Malloy and First Lady Cathy Malloy. “We were surprised by how many people hadn’t had access to this house, and we were interested in making it more inclusive,” says Mrs. Malloy. “Our ultimate goal is to open the property to the public and add it to the list of historic venues in Hartford.” Since work on this house began, 100-plus artists have contributed to the property. “We feel it’s a great beginning to getting people engaged in that effort,” she adds.

» start your tour of the residence

This article appears in the November 2011 issue of CTC&G (Connecticut Cottages & Gardens).