Pop-up shops are the reigning darlings of the retail industry. They are an inexpensive way for brands to generate buzz, and, for the consumer, a chance to buy something one might not usually have access to.


Lately, though, it seems the pop-up is entering on a new era, and shops within bigger stores are starting to crop up. Big-name retailers are approaching smaller, lesser-known brands to carve out a fresh niche for themselves and garner a little excitement.

Recently, Saks Fifth Avenue tapped Connecticut’s Lillian August to create a permanent shop on its home floor. “Our home department has been through some different incarnations through the last decades,” says Eric Jennings, vice president, men’s fashion director at Saks. “We had moved away from furniture and fabrics and wanted to bring it back. I’d heard of Lillian August, but only in passing. I popped into the New York City shop when it opened and loved it immediately. I met Dan Weiss [president and CEO of Lillian August], and we both agreed there might be good synergy between Saks and Lillian August.” 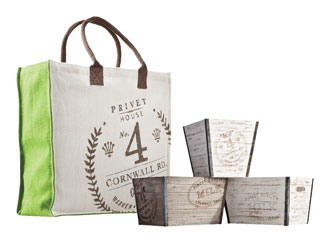 The shop at Saks will feature some of Lillian August’s best-selling products from their proprietary lines, like Lillian August for Hickory White and Curry & Company—sort of a best of boutique—as well as design services. “We are a lifestyle brand that really encompasses all areas of the home,” says Weiss. “We have a unique product and that lines up very well with the Saks customer. It’s a great opportunity to collaborate with some of the best luxury brands in the world.”

Target, too, collaborated with a Connecticut–based shop to build on its philosophy of making good design available to the masses. Its new program, the Shops at Target, partners with shop owners and boutiques to create affordable collections for shoppers looking for things other than run-of-the-mill goods. For a temporary pop-up this past spring, Target handpicked Privet House, a Warren and Greenwich store founded by Richard Lambertson and Suzanne Cassano that is filled with a selection of antiques and vintage furniture and accessories for the home and garden.

“They found us—out in the middle of nowhere—well over a year ago,” says Cassano. “Target is obviously known for partnerships with fashion designers, but they felt that that idea was getting stale. They were looking for the next iteration and travelled the world to find stores that were so wonderful they wanted to tell their friends about them.” Items sold at Privet House inspired the limited-edition collection for Target, which ranges from tabletop to pillows and paper, as well as a garden collection. “It was everything that was on my wish list for a first product line,” says Cassano. It was all about bringing a Privet House aesthetic to the Target shopper.

“People who had never heard of Privet House have awareness now, and our customer who may never have shopped at Target before was encouraged to shop there,” says Cassano. “Everybody wins.”