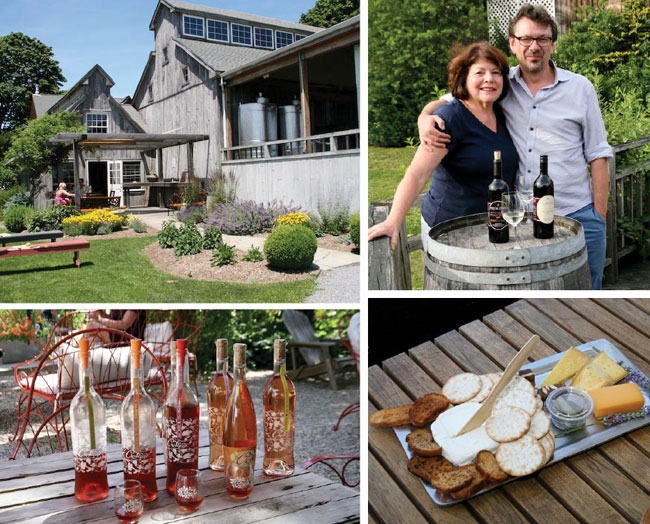 1:15–2:30 P.M. | A live band serenades Le Dû as he settles into a seat on the deck overlooking Bedell Cellars vineyards. He is drawn to the Gallery ’09, a blend of whites with freshness and great Viognier aromatics. Le Dû loves the “rose petal, strawberry, red fruit character” of the “super pretty” Cabernet Franc ’10 (he orders two cases). “The 2010 is one of the best vintages I’ve tasted on Long Island,” he says. “If it is a harbinger of things to come, it portends well for the region.”

2:45–3:45 P.M. | Alexandra Macari offers Le Dû a tour of the 420-acre Macari Vineyards (200 acres under vine), with its menagerie of animals—peacocks and Sicilian donkeys among them—but he gets right down to tasting. “The Sauvignon Blanc ’11 has a nice freshness,” he notes, as does the Early Wine, a Chardonnay with green apple crispness. His favorite is the fragrant Block E ’08 dessert wine.

4–5 P.M. | At Croteaux Vineyards, Michael Croteaux pours his rosés in a French Provençal–style garden flanked by an 18th-century barn. The winery makes nothing but rosés, and Le Dû quickly singles out the Merlot 181 as “delicious, austere, very much in the style of Provence” before placing his order. “Michael Croteaux has a great concept here,” he says. “He’s not trying to produce $100 Cabernet from Long Island. This was potato farmland, and the soil is too rich to make serious terroir-driven wines. I applaud him for making lovely, simple rosés.”

5:20–6:30 P.M. | Dry Rieslings lure Le Dû to Paumanok, where “the Rieslings are as good as it gets on Long Island,” he says. “They may not have a lot of terroir, but they’re not too extracted or alcoholic either—just well-made wines.” While here, he discovers a Cabernet Franc (2010) that is a revelation. “It smells great,” he says, “and is true to its varietal, well balanced but with a touch of higher acidity. The 2010 is a wonderful vintage. And Cabernet Franc is clearly the North Fork’s most interesting varietal.”