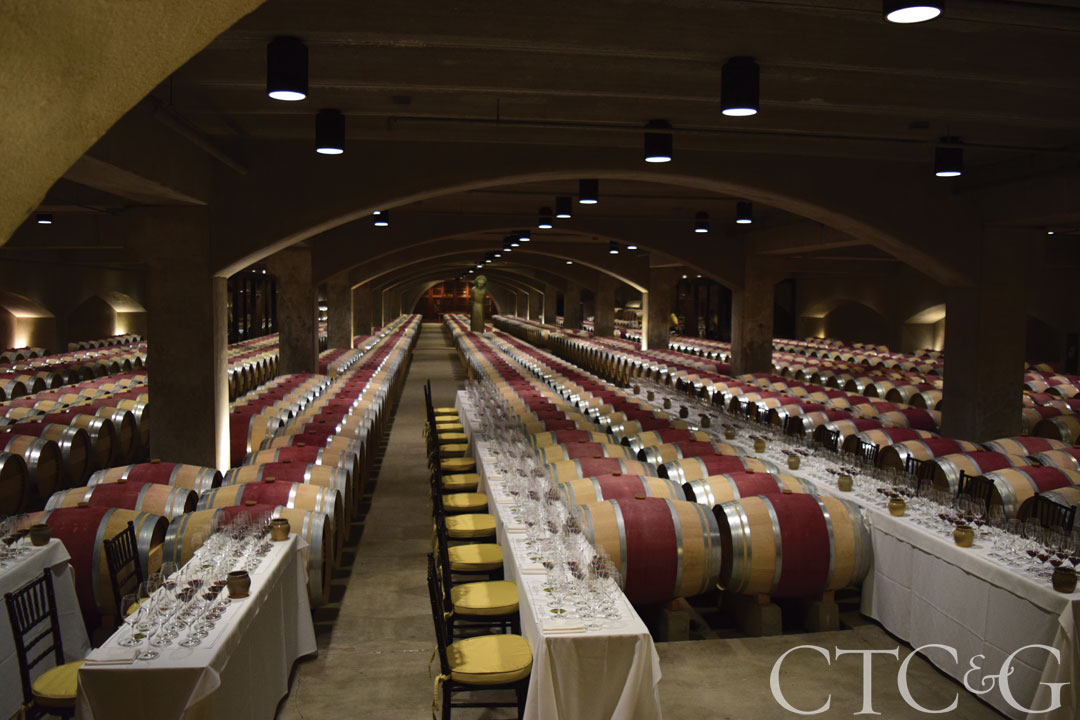 A wine should have the power of Pavarotti’s voice, but the smoothness of a baby’s bottom” was Robert Mondavi’s catchphrase for the style of his Cabernet Sauvignon, a highlight of an epic tasting in the To Kalon barrel cellar in Oakville. On this occasion, wine critics tasted vintages going back to the 1960s for the press preview of Robert Mondavi Winery’s 50th anniversary.

We worked our way backward from the 2007 vintage to the 1968 (the 1966, the first vintage, would be featured at the gala dinner). There was a reverent hush to this tasting since we felt we were drinking the history of Robert Mondavi, Napa’s spiritual founder, and the history of the To Kalon Vineyard, considered Napa’s first-growth vineyard equal to those of the great Bordeaux chateaux.

“See if you can detect a consistency in style,” said Mark de Vere, a master of wine who guided the tasting. He divided the wines into cool, warm, wet or dry vintages. Cool vintages were most Bordeaux-like. “The wines have cassis, blackberry and savory herb notes and structure, density and freshness. We are following Bob’s vision,” de Vere said. “The ability to have a presence on the palette, without being a fruit bomb, and a finish that’s still mouthwatering.”
The cool 1998 vintage, the most challenging of the ’90s, emerged as “classic Napa similar to the Médoc.” The “seductive” 1994 was a dream vintage. The critics detected a hint of eucalyptus in the 1991, which is celebrated in Heitz’s Martha’s Vineyard Cab. But here, although they pulled out the eucalyptus trees, some oil residue was still in the soil. I guess Mondavi didn’t want his smooth baby bottom to come with a note of Vicks VapoRub.

The ’81 smelled of coffee; there were “notes of violets and bacon” for the 1971. When de Vere informed us that we had finished off the last bottle of 1969, a gasp echoed through the barrel room. And the 1968 was declared the “vintage of the century,” which had inspired John Shafer to start his namesake winery.
An astounding 50 bottles were uncorked during the three-day celebration. The last day featured newer Mondavi vintages with Fumé Blanc and Pinot Noir in the mix guided by the longtime director of winemaking Geneviève Janssens, along with winemakers Joe Harden and Megan Schofield. At lunch, Janssens unveiled the anniversary blend, Maestro 2013, named for the “bandleader of the Napa Valley.”

The most moving moment came at the gala dinner with Mondavi’s widow Margrit. When the 1966 Cabernet was poured, a spry-looking Warren Winiarski, 87, sprung up and said, “I made that wine.” Legendary winemakers who got their break through Mondavi—Zelma Long, Paul Hobbs—all chimed in on the tribute. When de Vere cited the Pavarotti/baby-bottom line, Margrit, still in charming form as she approaches 91, quipped, “Wait, that’s my line!”

The Gala 50th Anniversary Weekend takes place at the Robert Mondavi Winery in Oakville on July 16 and will include cooking demos, art exhibits and live music. Anniversary-themed events will continue throughout the year. Library wine tastings with customized flights of wines selected from five decades will be offered daily, and exclusive Five Decades Dinners—wine tasting from five decades and a four-course pairing dinner—can be reserved.

Anniversary-labeled collectible bottles include Maestro 2013 ($50), a Merlot-dominant Bordeaux blend that exudes dark fruit, cardamom and nutmeg notes and a lingering finish of dark berries and spice. Cabernet Sauvignon Reserve, To Kalon Vineyard, 2013 ($155), with its commemorative label, will be released this September. Winemaker Geneviève Janssens describes it as muscular and concentrated with complex notes of blackberry, cassis, dark cocoa powder, forest floor and sweet vanilla.

A version of this article appeared in the July/August 2016 issue of CTC&G (Connecticut Cottages & Gardens) with the headline: Going For Gold.