With An Eye Toward Sustainability, Architect McKee Patterson Upgrades a 20th-Century Colonial 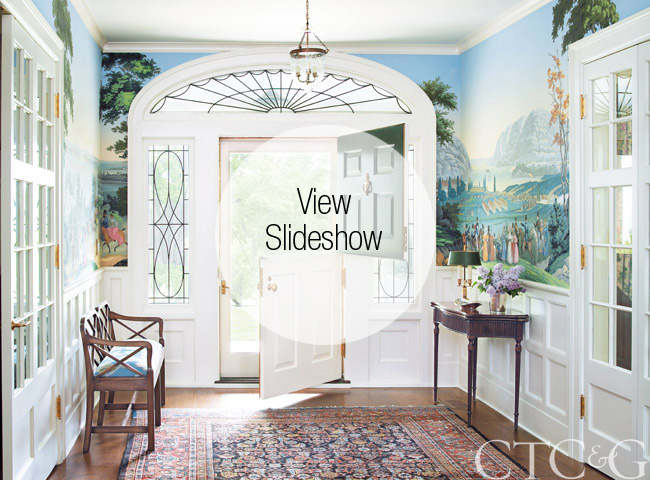 When you’ve completed three major interior design projects with the same couple, you might not be able to finish each other’s sentences but you likely know the answer to “chintz or stripes?” without having to ask the question. So when the owners of an early 20th-century Colonial Revival contacted Paul Stuart Rankin for a fourth go around, he knew just what to do. “My client is in shipping, his wife loves flowers, and the previous owner, my client’s father, was a birder,” says Rankin, who immediately saw maritime, ornithological and floral themes emerging. “I knew it was my job to make the house, which has been in their family for 50 years, personal to them by carrying these ideas forward.”

But the ships, flora and fauna would have to wait. The grand Colonial was in desperate need of upgrading, and the new owners wanted all changes made with an eye toward sustainability. “It was originally built as a summer house, and the plumbing and electrical had never been redone,” says Rankin. “We needed to rethink it for modern life while maintaining the original spirit.”

Enter architect McKee Patterson, who determined that pretty much everything located beyond the front hall, the staircase and living and dining rooms had to go. “There was a poorly built addition that we tore off, and whatever we didn’t remove, we took down to the studs,” says Patterson, who crafted an improved floor plan that included a kitchen, breakfast nook, family room, and pantry on the lower level and four bedrooms, four bathrooms, and a master suite above. “But because the client grew up in this house, I knew it was important to keep certain things as well.”

So he painstakingly removed, saved, increased and reinstalled the wainscot in the front hall, rescued the old windows with their beautiful restoration glass and upgraded them with good storm and screen systems, and kept all the fireplaces. In addition to his recycling efforts, Patterson included state-of-the-art foam insulation in the walls, introduced eight energy-saving wind turbines atop a newly designed windmill, and dug 17 geothermal wells for heating and cooling the main house and outbuildings on the 14-acre site.

Outside, the extension of the front porch and veranda addition so perfectly enhance the building it’s hard to imagine they weren’t always there. “I felt it was more about finishing the house than redoing it,” says Patterson, whose sensitivity garnered his firm a Preservation Alliance Award for Outstanding Preservation of a Historic Site.

With the walls and floors back in place, Rankin introduced furnishings, antiques, and artwork all perfectly suited to the venerable architecture. Upon entering, a series of Zuber wallpaper murals depicting Boston Harbor, West Point and the like make a strong statement about what lies within, and from that point forward Rankin adhered to the home’s classical countenance.

In the living room, a pair of floral chintz sofas and a set of 19th-century lap desks turned into end tables reinforce the elegance of the country manor. “The original room was painted hospital green, and I maintained that idea with a fresher glazed-lettuce tone,” says Rankin, who peppered the space with bright coral accents. Antique Hitchcock chairs in the breakfast nook and a pair of 19th-century bobbin chairs in the second-floor sitting area are all period appropriate. But it’s the subtle infusion of floral, maritime and bird references that make every room intriguing and, most importantly, personal.

The tile fireplace surround in the living room depicting ships balances the flowery pattern on the sofa and drapes, while the master bedroom chandelier includes a floral twining, and the fireplace andirons are anchors. In deference to the client’s father, the room’s wallpaper features handpainted birds.

One of the home’s great treasures, a world map created in 1680 by a Dutch cartographer, hangs in the back entry hall. “The owner was totally mesmerized when we found the map at an antique store,” says Rankin, who lowered the wainscot to make a place for it. “Like so many things, the map reflects who they are and makes their home comfortable and special to them.”

A version of this article appeared in the September 2014 issue of Connecticut Cottages & Gardens with the headline: Past, Present & Future.