With Its Streamlined Form and Transparency to Nature, a New Home by Architect Mark Jensen Treads Lightly 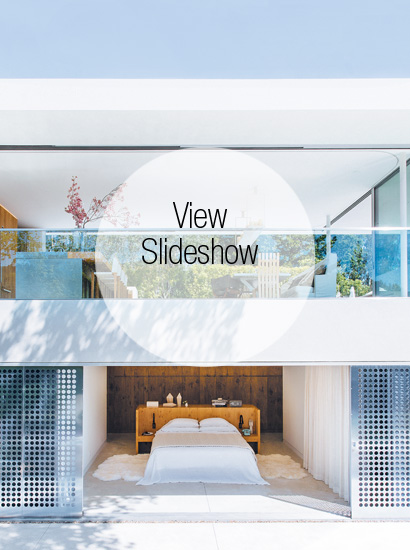 Mark Jensen likes to blue-sky ideas when he first discusses projects with clients. “I tend to bypass all the literal, prescriptive stuff because that shuts down the imagination,” says the lauded architect. “We discuss aspirations and what-ifs, and that keeps us all in the moment.”

The project occupies the crest of a steep, heavily wooded hill and soaks up a 360-degree, uninterrupted view of the Bay and Mount Tamalpais. Intent on preserving the land’s majesty, Jensen carved two lower floors (containing the bedrooms, bathrooms and a garage) into the hillside knowing they would recede even more once adjacent heritage trees matured. And rather than rule the ridge, the third-floor pavilion (incorporating the living and dining areas, kitchen, outdoor pool, terrace and shade canopy) hunkers down below most of the treeline, while it manages to command postcard views of the horizon, mountain ranges and sky.

“I was on a mission to protect the site’s natural integrity,” says Jensen, “and I admit that I went to extremes to make the bulk of the building disappear.” When all the window walls of the pavilion slide open, the 40-foot-long, cantilevered roof appears to free-float above a vast expanse of open-air terrace. Fixed exterior wall mirrors reflect live oaks and bay laurels as if they were structural supports. And when the Jack Lenor Larsen linen drapes suspended from a continuous track around the perimeter replace all the pocketed glass walls, the pavilion masquerades as a giant, quivering tent. There’s even a passive vanishing trick when dense fog reduces the pavilion to a white sliver, and it resembles a yacht floating on a calm sea of trees.

Interior designer Nicole Hollis took her lead from Jensen’s material palette of glass, white plaster walls, oak woodwork and pigmented concrete floors. Working closely with Ellen Turner, whom she describes as one of the most creative people she has ever met, Hollis introduced furnishings and textiles that demonstrate an organic, wabi-sabi appreciation of age. As a result, the decor seems to have evolved naturally over the course of time. She designed most of the larger upholstered pieces, as well as the master bed, and invited local artisans to create custom pieces from the same types of wood Jensen utilized in the built-in cabinetry.

The Turners’ informal lifestyle called for flexibility. In the dining room the table glides on wheels and directors’ chairs have no fixed abode; in the living room, an L-shaped sofa comfortably seats 10; and throughout the home, artwork leans rather than hangs. Hollis also included sculptural statement pieces like a cobalt-blue version of Christian Astuguevieille’s classic rope chair, and a huge coffee table constructed from recycled tires. When the wind tore a paper light fixture to smithereens, its replacement, Kevin Reilly’s metal Altar chandelier, satisfied another concept Jensen and the Turners established early on. Namely that everything in and of the house is impervious to the weather and in stride with nature.

A version of this article appeared in the February 2015 issue of San Francisco Cottages & Gardens with the headline: Floating World.