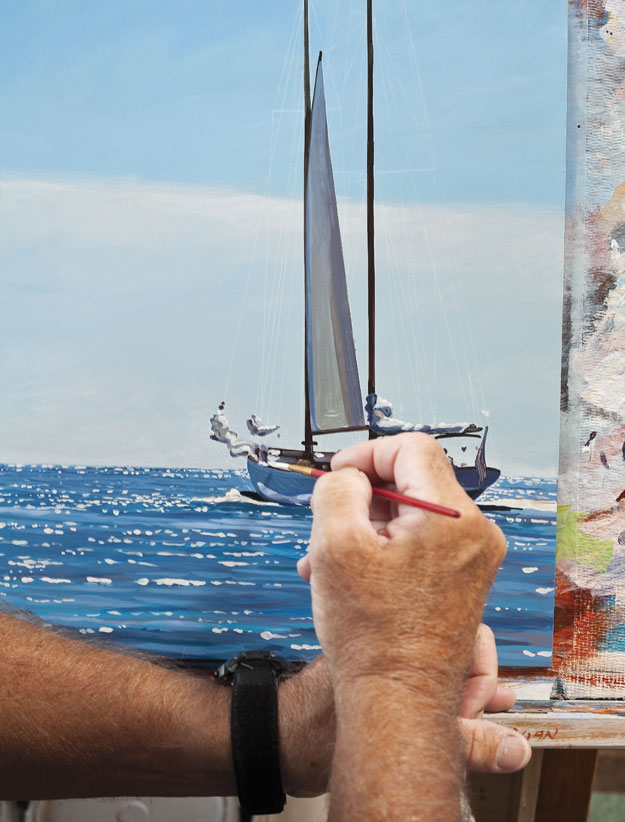 WHEN WESTROCK DEVELOPMENT FIRST TOOK OVER the American Fabrics Arts Building, it needed a lot of work—there was asbestos that needed remediating, electricity that had to be brought up to code and windows were covered with old boxes that kept out the light. The building is now home to a thriving community of artists who open their studios each year, providing an opportunity to offer their work for sale, as well as interface with the public. In the following pages, we profile six of these artists.

A native of Greenwich, Armstrong studied graphic design at Maryland Institute College of Art before working in New York City as a freelance fashion stylist and editor. She gave up that career to focus on ceramics, and has developed an unusual technique that has earned her both regional and national recognition.

Having her own studio in the American Fabrics Arts Building allows Armstrong to be more fully immersed in her work, far from life’s daily distractions. It also provides a much-needed community that she feels is “really energizing for the soul.” She is currently working on a series of sculptures based on the nudes of photographer Lee Friedlander. Armstrong’s technique of building black and white porcelain ceramic pieces that look like they have been stitched together relates to fine art as well as craft. “Being part of the American Fabrics Arts Building allows for a camaraderie with like-minded people in the solitary artist’s life,” she says. “As a group, we are able to engage with the community at large, through our Open Studios event. As we grow and become more organized, we hope to find other ways to give back to the community.” 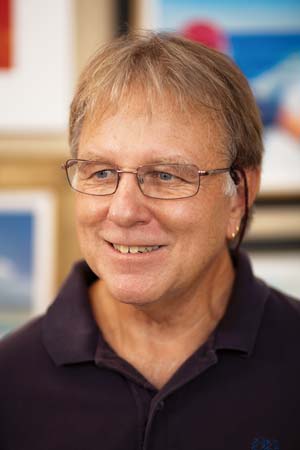 Growing up on the sea, Morgan’s fascination with sailing led to his career as a marine painter. He was one of the first to build a studio in the American Fabrics Arts Building and was instrumental in persuading Westrock Development to turn the building into much-needed artist’s lofts when they took ownership.

After a childhood of summers in Waterford, Morgan’s observations of the light and the activities on the water shaped his future as a painter and a sailor. At 17, he bought his first sailboat from his paper route savings and began exploring the Thimble Islands and the coast, eventually working on charter boats in the Caribbean. Morgan attended the Silvermine College of Art in New Canaan but left to work on an oyster boat for two years. He owned and operated a sign business in Norwalk for 23 years, and had the chance to paint many outdoor nautical murals. The real inspiration for his life as a painter came from the 18 watercolor sketchbooks, the 10-volume journal and boxes of photos he filled during his solo journey around the world aboard his 27-foot sailboat, the Otter. Morgan set up his studio in the American Fabrics Arts Building and he’s been painting ever since. 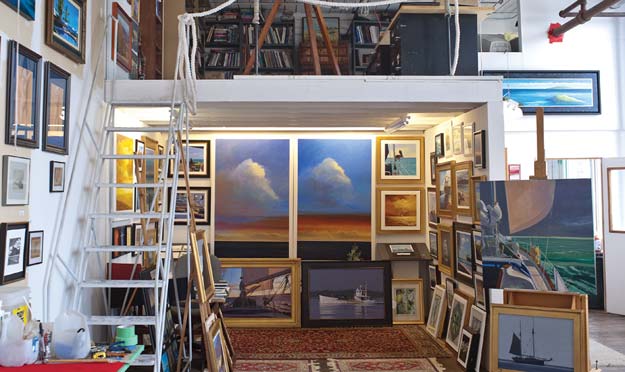 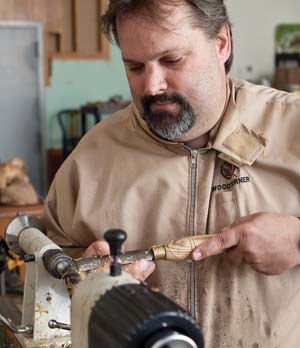 More than 30 years ago, Pabian started turning wood, but when he recently went back on the lathe, he started making pens instead of the larger objects usually associated with this craft. And he works much more than just wood—he uses acrylics, metal, cactus and other exotic materials. Pabian’s background in construction has led him to try recycled materials, too.

Pabian’s studio had been a 10-foot-by-10-foot space in his garage before moving into the American Fabrics Arts Building, which he describes as open and well-lit. “I needed to expand and give myself room to grow,” he says. “Moving into the new space kept me from totally cutting myself off from the outside world. In today’s computer age, we can disappear from sight. Coming to this building got me back up and moving in a great environment.” Pabian feels that it provides a big boost when other artists see his work. They give him feedback and encouragement; he likes the idea of being with a group of artists who are supportive and inspirational. And Pabian is always willing to invite customers into the studio so he can work with them to make them exactly the object they want. 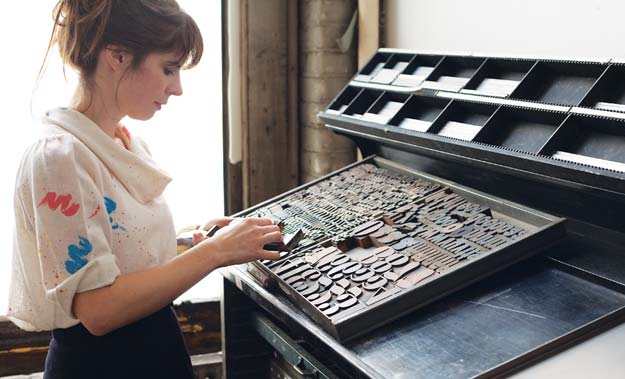 As an artist, writer, designer and letterpress printer, Larned continues to utilize an obsolete technology to create small ephemeral works of non-fiction. She’s an educator whose work is in over 60 public collections, and also the Co-Operator of Impractical Labor in Service of the Speculative Arts (ILSSA), a group that values community and process. For Larned, the American Fabrics Arts Building was a perfect fit.

After getting bumped from the Remington building and the Star Pin Factory when those properties were sold, Larned’s husband discovered the American Fabrics Arts Building through a friend and they both acquired studios there. She started out with a space in the basement, eventually moving to the third floor, which Larned describes as a dream. “Being here enhances the work experience,” she says. “It’s so nice to have great people to talk to when you want, but also shut the door when you need to work.” She finds that people are generous with their time and resources, too. Fellow tenant Thomas Mezzanotte found her a replacement part among his boxes of old machines when a knob broke off her printing press. Some people think hand-setting type is boring, but Larned says that having your hands busy allows your mind to freely wander in interesting and rewarding ways. 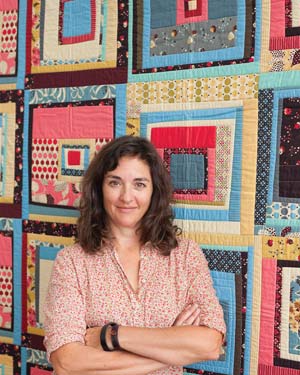 A former graphic designer and Rhode Island School of Design graduate, Schmidt began sewing as a young girl and later worked as a professional seamstress on items as diverse as tutus, bishops’ mitres and fine clothing. She now uses traditional quilt-making skills to create a line that is offbeat and modern.

Schmidt was another artist who had lost her studio and feels lucky to have found a home at the American Fabrics Arts Building. “It’s essential that small, creative businesses and artists have affordable work space so they can focus their resources on growing their work or business,” she explains. “I’m grateful to also have a community of like-minded neighbors and a caring landlord.” Schmidt says the folks at Westrock have made many improvements and have been very flexible. The building was nearly empty when she arrived in 2005, and now it’s full with a waiting list. And she generously shares her knowledge teaching workshops in her studio, passing on a traditional craft that is anything but. 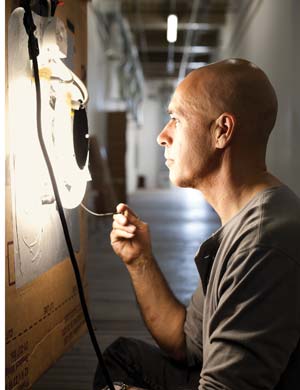 In a world of point-and-shoot digital cameras, Mezzanotte explores the potential of a 100-year-old camera, and the notion of emotional focus—of the subject, that is. He also uses a camera obscura that he built himself, which is a multi-step, labor-intensive process. The result is other-worldly, unexpected works of art.

After a number of rent increases in his former studio, Mezzanotte began renting space in the American Fabrics Arts Building, only to have the city foreclose on it shortly after. But he stayed on when Westrock took over the building, and as other artists heard about the space, it grew into a true artists’ community.

“It’s a wonderful space to have a studio,” says Mezzanotte. “After 20 years of working in isolation, the opportunity to work in a rich creative atmosphere is a powerful stimulus to my work.” He explains that the large space, which he designed specifically for his work—with 16-foot ceilings and room for an 11-foot sink—allows him the freedom to experiment with unconventional ways of making his images.

A Shelter Island Artisan Sticks to Her Knitting