A home where old and new go hand in hand with style and confidence.

Old houses are amoung the most challenging projects, but we often find working within such historical context to be most fulfilling. Our clients, a couple with two young children, purchased a 1920s English-Georgian-Colonial hybrid in central Greenwich. Giving the house a classic English country house vibe—with all the heavy trappings that go along with that style—could have been an easy and expected route. Yet, their youthful verve has been integrated into every facet of the home. Bold decorative flourishes and grand gestures, such as the brilliant color palette, the sweeping mural in the gallery and stairwell, and the incorporation of global influences, keep this otherwise formal home far from being stodgy or sedate.

It is timeless in the sense that its myriad influences allow it to defy time and place. Preserving the charm of historic elements while sensitively updating the plans and integrating modern amenities is challenging, but not being able to pinpoint where history left off and where our firm picks up is a feat unto itself, and one that we are especially proud of. Some historic houses benefit from the juxtaposition of a contemporary wing, but most of our clients are looking for a studied integration of traditional features. In many cases, the nuances of such gestures are of the utmost importance, yet their subtle integration appears as if we were never there. 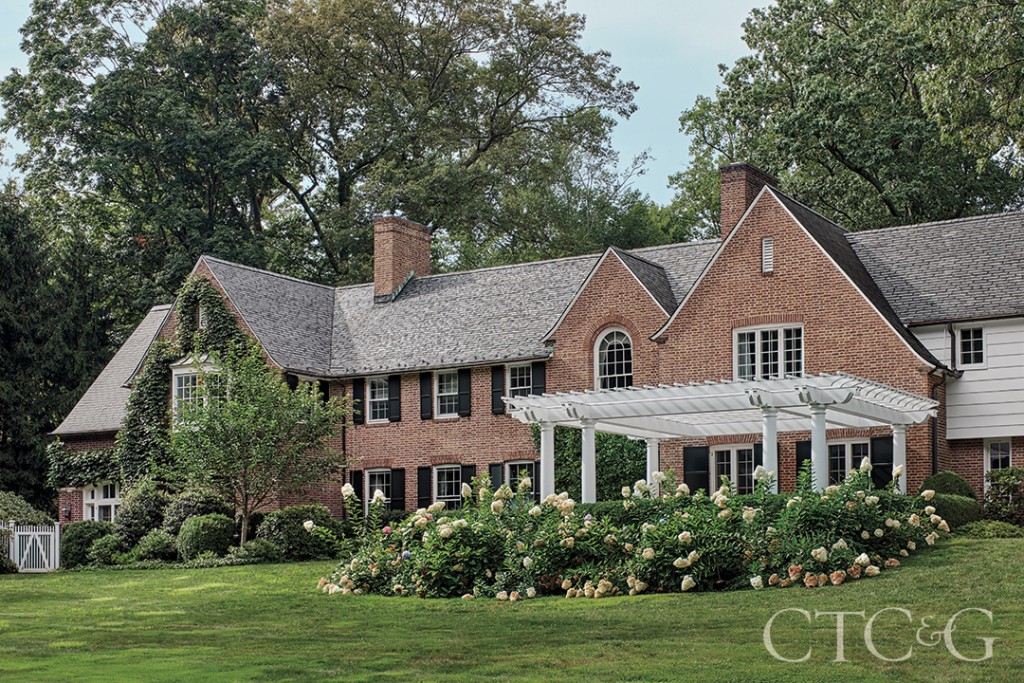 The footprint of this home was expansive but decidedly charming and intimate—and as rambling as the neighborhood’s narrow, winding streets. The house itself, which is a weekend and summer retreat, is on a parcel that was part of a Rockefeller homestead in the early twentieth century. Sensitive development over the years ensures that the neighborhood retains a quiet woodland feeling.

When we began, there were some deferred maintenance projects to attend to—a leaky slate roof in one crevassed area (the structure has no shortage of angles, deep pitches, and stylistic flourishes), led us on an expedition to match the original slate tiles, which were unique in striation and size. Beyond a number of subtle gestures, it was in the substantial reconfiguration of areas like the highly trafficked family wing (originally a jumble of dark rooms in a garage with low concrete ceilings) and the addition of a new and lovingly used pergola that we were able to exercise our most generous gestures for melding old and new. The designer selected a wallpaper featuring Arabesque arches, which adds another level of architectural interest. 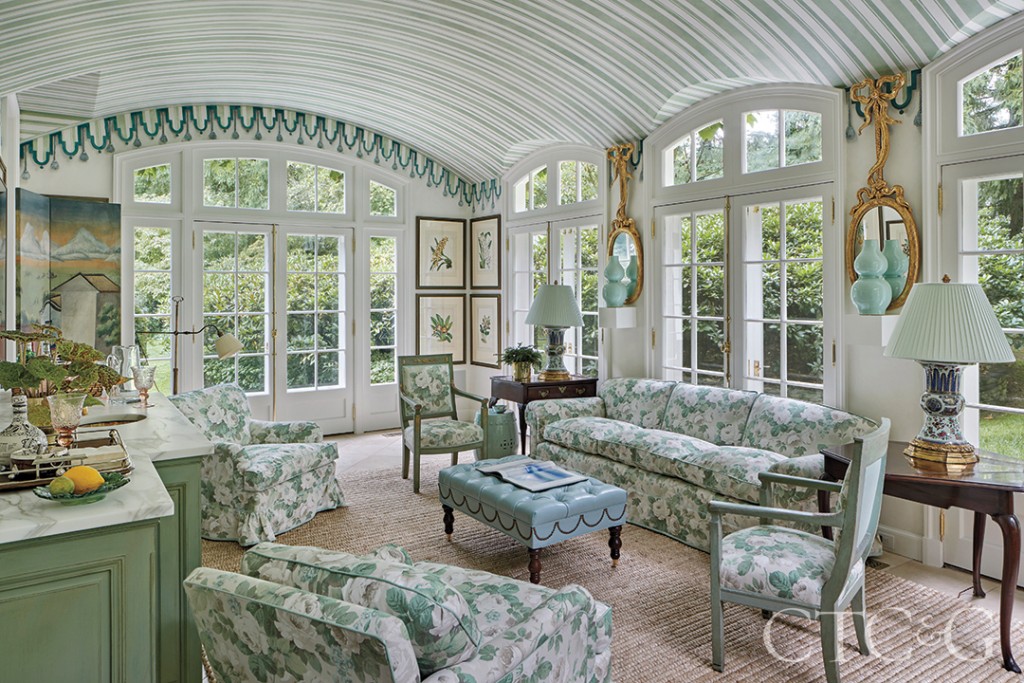 The entry area and formal rooms with their classical elements and generous scale required a much more restrained intervention. Some of the trim was subtly supplemented, lighting added, and damaged areas repaired as a backdrop for the bold interior finishes that followed.

In the sunroom we removed heavy pilasters on the walls to showcase the graceful arched ceiling. Completely rebuilding an existing bar area in the space—fashioning it with a thick Calacatta marble top and an unlacquered brass sink and fixtures—gives the space a feeling that’s more appropriate to both its original intent and bridges that past with a cleaner aesthetic and contemporary entertaining needs of our young clients. A striped ceiling gives the impression of sitting under glorious tented space and blurs the line between indoors and the gardens just beyond. 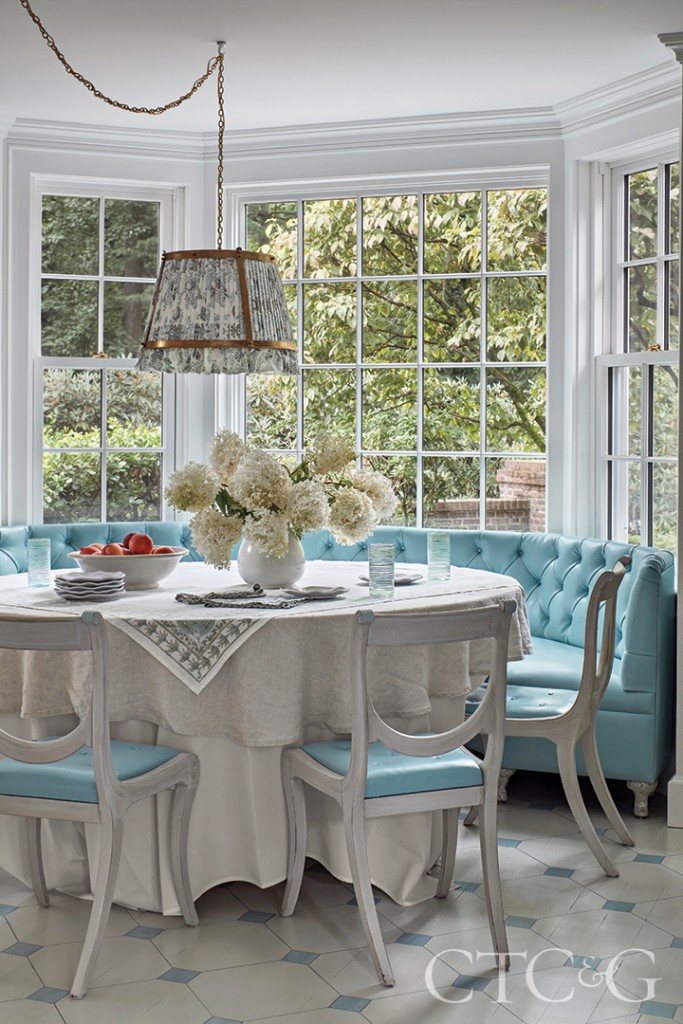 With the addition of new French doors in the family room (to match an existing set), and an expansive bay window in the breakfast area to take in the garden views and the property’s winding driveway, previously dark, interior focused spaces now connect with the garden setting of the property.

The new classical pergola replaces a heavy, dark-green-and-white striped canopy awning and galvanized metal poles. Concealed LED lighting, which creates a constellation-like pattern at night, hangs from old timbers that have been milled into long-span rafters and spaced to allow for maximum daylight in the dining room. Once again, it’s the combination of marrying past and present—and forward thinking that harkens to a bygone era—that makes this house a home where old and new go hand in hand with style and confidence.

The print version of this article appears with the headline: Countryside Retreat.
Subscribe to C&G