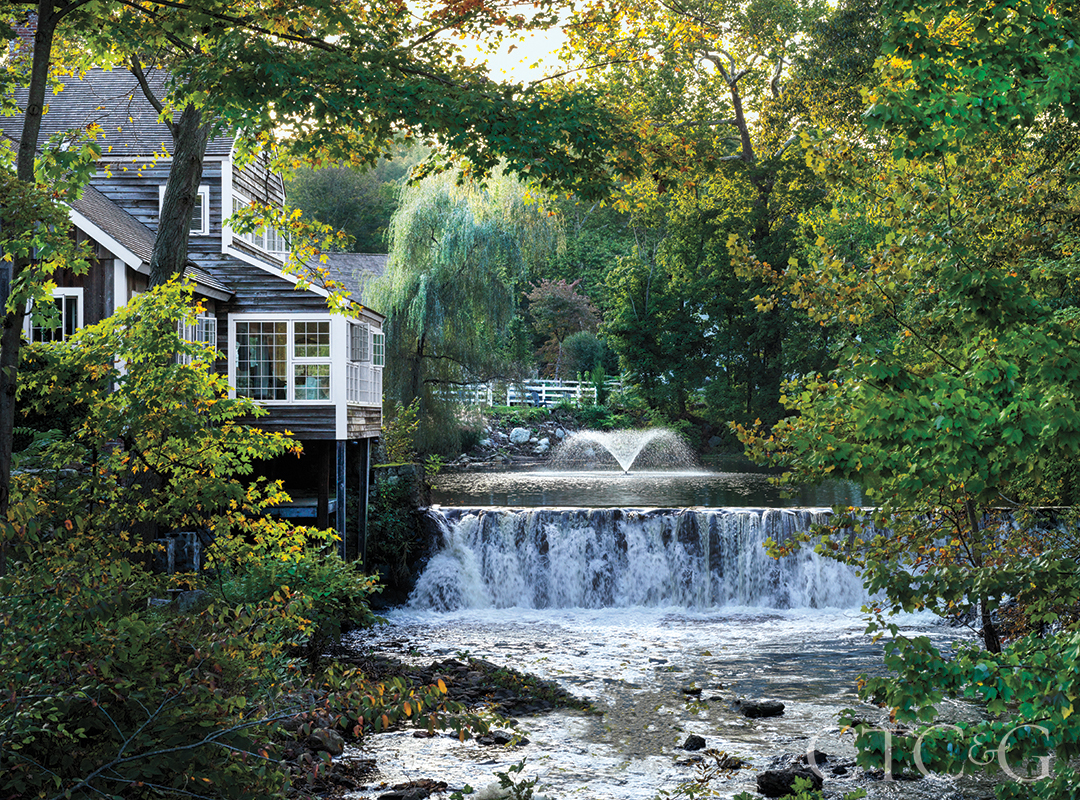 Andy Glazer’s odyssey began five years ago, when he acquired a cluster of historic buildings in Silvermine, including the then-shuttered Silvermine Tavern, its inn, a store and the original mill house perched above the rushing river. Glazer would soon find the mill house to become his new family home. The Glazer family—including Andy and his wife, their daughter, Nikki and designer Marsha Glazer—are no strangers to rescuing historic structures. Indeed, the Glazer Group specializes in restoring and repurposing New England’s antique inns.

“Over the years, I have become more and more passionate about restoration,” is Glazer’s way of putting it. And always: “If I can’t do it the right way, I won’t take it on at all,” he says, noting that he’s seen restoration projects that yielded merely “good enough” results. You might say “preservation light,” with less expensive methods and materials deployed to get the job done.

There was nothing “light” about the Glazers’ Silvermine project, and his new home, the mill house, was especially…not light. “I very much bought it ‘as is,’” Glazer says wryly of his home, which he describes as a “one-thousand-piece puzzle.”

One of the “extremely irregular” pieces was the mill’s six-foot-wide stone foundation that sits below the river’s surface. It took a specialized crew to secure new piers into the underwater foundation and to frame out new walls. There was also no small amount of flexibility—and courage—to lay new floorboards over a space that looked down into where the river drops over a waterfall.

“I always say that I know where I want to go with a project like this, but I don’t know how I’ll get there,” says Glazer. What he did know is that the mill’s post-and-beam structure had already proven to be something of a survivor, having withstood snowstorms and flooding. For years the house acted as a working mill and then as auxiliary rooms for the inn next door. These quarters welcomed guests like Elizabeth Taylor and Eddie Fisher on their honeymoon, the Kirk Douglas family at Christmas time, plus frequent visits from Spencer Tracy. 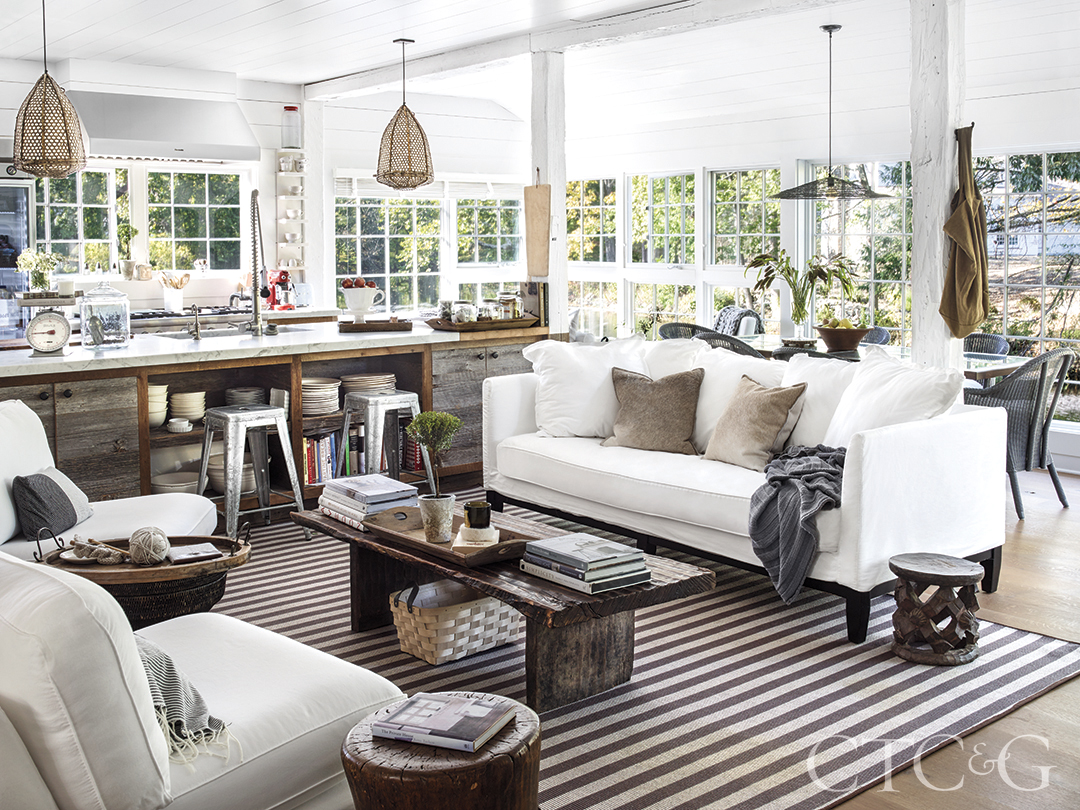 It is that kind of heritage—and those stories—that motivated Glazer to do right by the mill house. Rather than replacing the massive hearth and its teetering chimney, he rebuilt it brick by brick. He created an open plan for the lofty ground-floor rooms with walls of floor-to-ceiling windows overlooking the falls.

Within that space, the kitchen area features an oversized island constructed of reclaimed wood, with open shelving for all-white crockery, and lit by hand-woven rattan pendants from Tucker Robbins. The custom-designed table is set directly along the window wall overlooking the river. 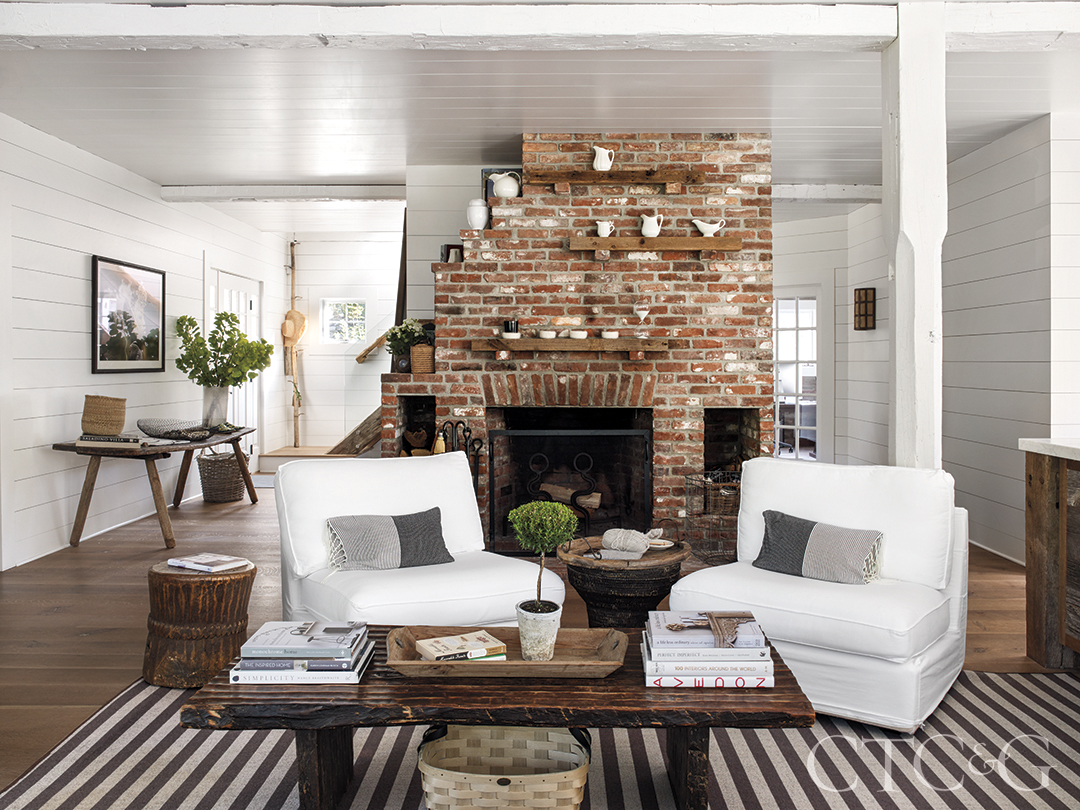 Many of the furnishings were designed by the Glazers and crafted in an on-site mill shop. Everything was dedicated to the complex, including the wenge-and-walnut four-poster beds and several styles of nightstands and benches. 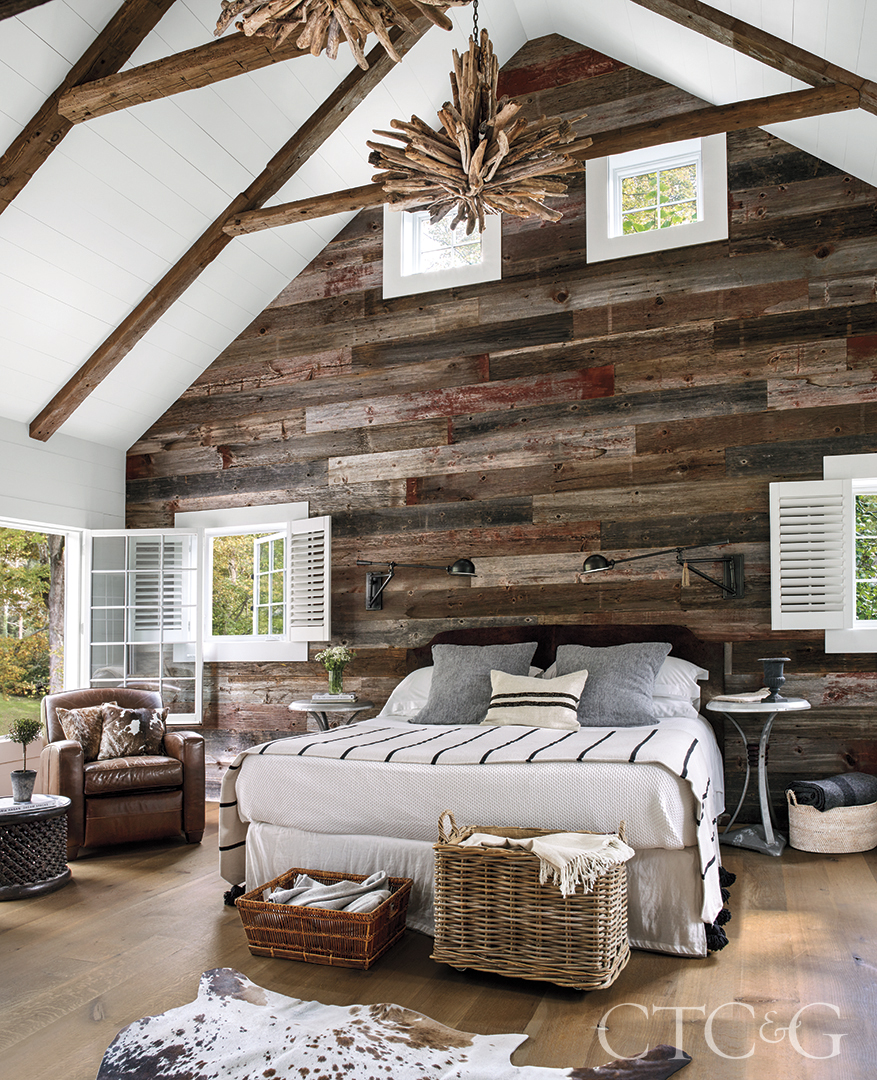 The main bedroom suite feels entirely artisan-made, inside and out. It was constructed by Glazer and his crew from the ground up, where a logging shed once stood. As a structure, the shed was beyond repair. In its place rose a lofty suite with cathedral ceilings buttressed by reclaimed beams and lit with driftwood chandeliers from Bleu Nature. One entire wall handcrafted of salvaged boards contrasts beautifully with the crisp white shutters, shiplap wallboards and Frette bed linens.

Whatever the mix, the building materials found and salvaged on site are always the star. “We can all debate what makes up the soul of the house,” Glazer says. “But I’d argue that it’s the original materials. You discard them, you discard the soul.”

The print version of this article appeared with the headline: A River Runs Through It.
Subscribe to C&G

A Design-Savvy Couple Reimagines Their 1940s Dutch Colonial in Norwalk