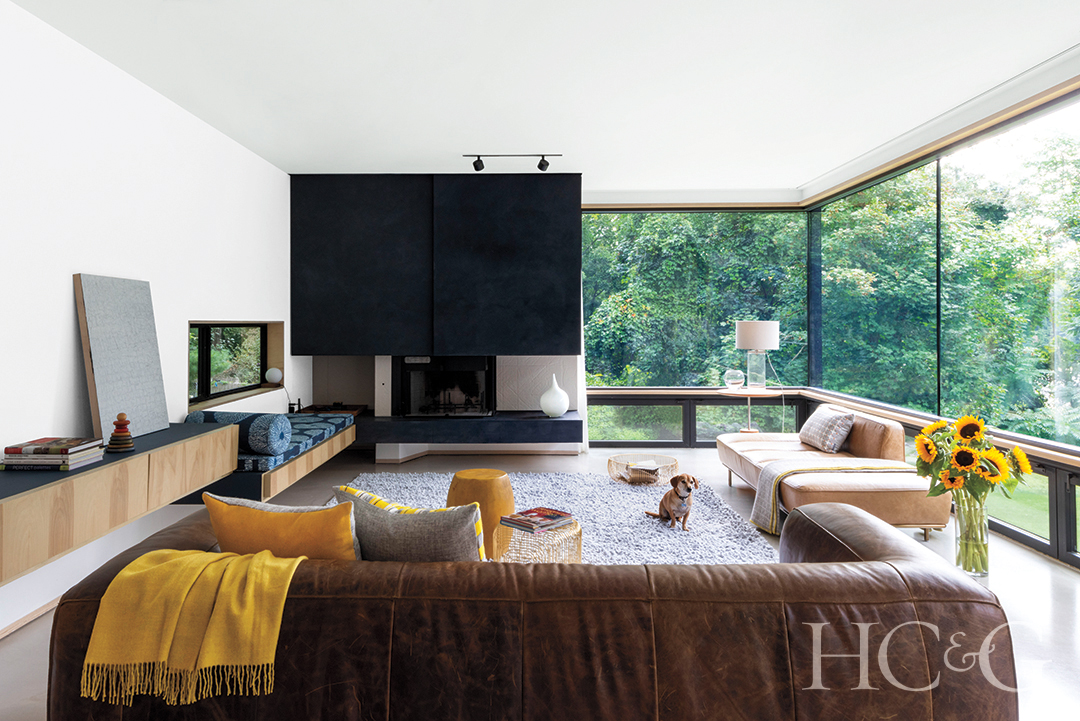 Sofas from CB2 and Article delineate the living room, which is framed by huge plateglass windows. Principal Photography by Kay Media

Like many architects, Bridgehampton-based Nilay Oza never dreamed that he could live in his own design, since “building a new house,” as he well knows, “is no small thing.” Not to mention the often larger challenge of finding the perfect plot of buildable land in the competitive East End market. But Oza, who was born in India and earned a master’s degree from MIT, refused to abandon his search for an affordable waterside lot. “My wife says I’m a Pisces who has to live on the water,” he explains, “and I just couldn’t give that up.”

While cruising down the Bridgehampton–Sag Harbor Turnpike a number of years ago, Oza happened upon a for sale sign in the snow, near the edge of little-known Lily Pond. The listing’s developer-owner, it turns out, was eager to pass the torch, so Oza and his wife took over the property, after selling their apartment in Harlem.

The lot was “dumpy” and difficult, according to Oza, who remembers it as one of the most challenging he has ever encountered, buffeted by noise from 45-miles-per-hour traffic and awash with road runoff that inches toward the pond. During construction, he reports, his crew found themselves “dancing around big piles of sand in order to build.”

The developer’s approved plan called for a façade that would essentially be level with the road, but Oza was on his own from there. Permits to dig down six feet below for a sunken outdoor entry forecourt and main level was just the beginning. One level deeper, he also swapped out what would have been a windowless foundation for a basement with guest quarters, a bathroom, and walk-out access to a backyard swimming pool and hot tub.

The home’s provocative, windowless façade—it’s lined in vertical planks of solid mahogany—acts as a buffer against the street traffic. These planks in turn angle up to the roof ridge and back down, in lieu of shingles. Underneath each mahogany plank lies a black rubber membrane that waterproofs the plywood shell, although in some areas, Oza has left it exposed because he likes its high-tech look.

To passing cars, the bold structure reads like a pair of oversize Monopoly houses made from popsicle sticks. Peter Sabbeth, Oza’s partner at Oza Sabbeth Architects, deems it “a sculpture” and praises its aura of mystery and anticipation. “Everyone asks what’s happening on the other side,” he says. “Most gorgeous modern houses are tucked away, but this one is very much a public work of art.”

Visitors approach through a garden gate and proceed down a flight of steps to the sunken forecourt, where the Bridgehampton home continues to retain its mysterious allure, save for a lone window in the entry. It’s recessed, so “you can’t see headlights from the turnpike,” Oza notes. The payoff is the main level’s compact, yet spectacular living room, with huge plate-glass windows running the length of the structure and looking out over the pool. If the wind is whipping during a storm, Oza says, the feeling is similar to standing on the edge of a cliff. “Attraction to a little bit of danger,” he muses, “is hard-wired into our lizard brain.” 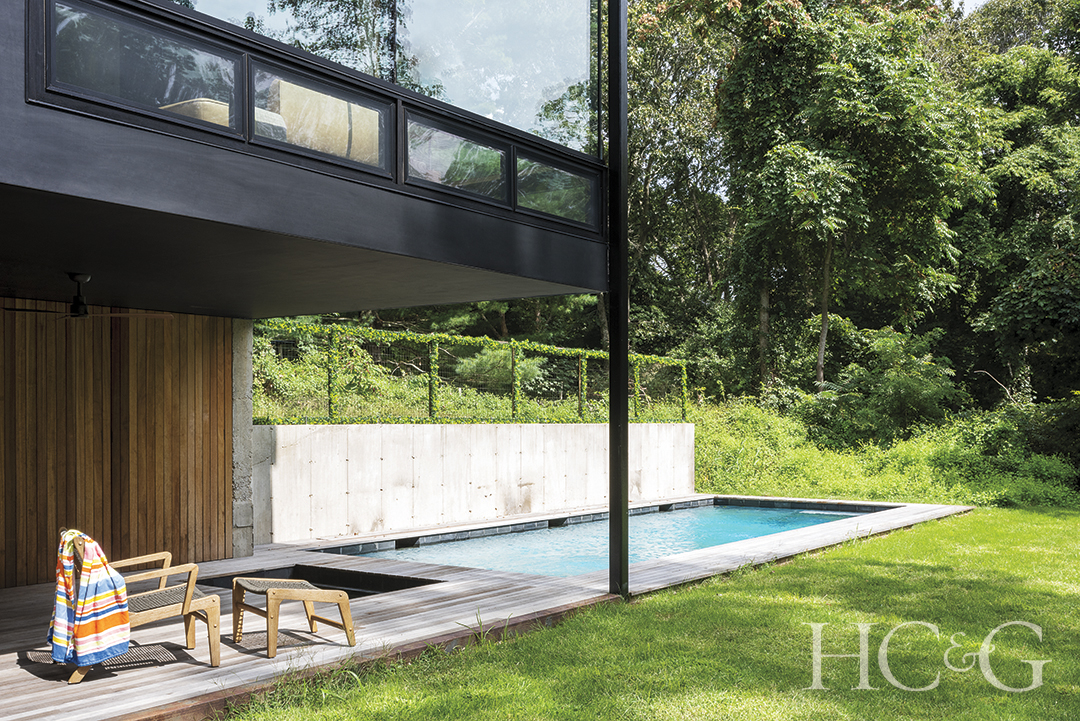 The rear of the house is oriented toward views of the pool and a pond beyond. Principal Photography by Kay Media

“We wanted to get away from using Sheetrock,” notes Sabbeth, who also cops jokingly to offering “tons of unsolicited advice” during the home’s construction. Now that the structure is complete, it inadvertently serves as a billboard of sorts, attracting untold inquiries from customers dining at the Mexican-American restaurant located just across the road. The house Oza once only dreamed of building has become his calling card as well.

The print version of this article appears with the headline: Pike & Pond.
Subscribe to C&G

This article appears in the August-15 2021 issue of HC&G (Hamptons Cottages & Gardens).