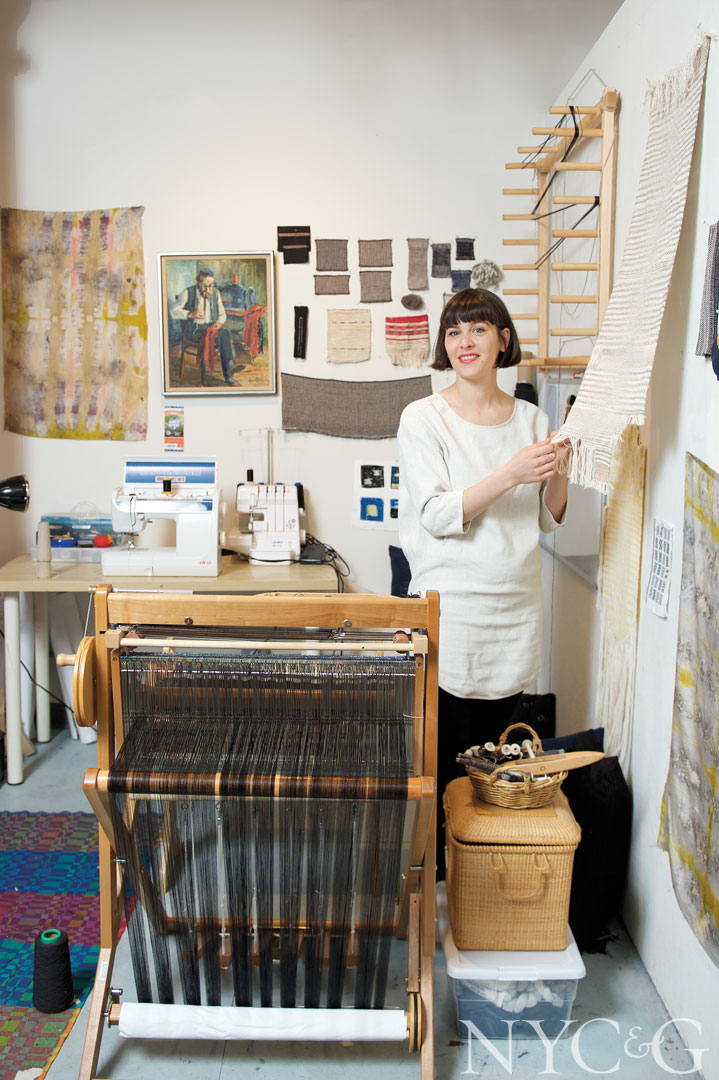 Jamie Hart Israelow is perched in front of a wooden floor loom, surrounded by piles of raw wool rovings, handspun silk, knit linen, and Japanese cotton, at the Textile Arts Center in Gowanus, Brooklyn, where she recently completed an artist-in-residence program. As hip-hop music plays in the background, the self-taught artisan weaves highly textured fabrics—often bearing perfectly imperfect linear patterns in primarily neutral tones—which she ultimately transforms into throw pillows and sells under the label Hart Made. “My work is influenced by the beauty of the places I visit, whether it’s the colors of the landscape or native materials,” says Hart Israelow, who once sourced hand-dyed silk from Vancouver to create textiles that reminded her of the Canadian city. “The designs aren’t literal representations of the outdoors, but they recall the feeling of being in nature.”

A Connecticut native who previously worked as a newspaper and magazine photo editor, Hart Israelow purchased a beginner’s loom just three years ago. “I was looking for a new outlet, and I learned how to weave through experimentation,” she says. “There’s a mindfulness to weaving. You always have to be aware of what you’re doing and thinking about the final product, even if it’s several stages away.” 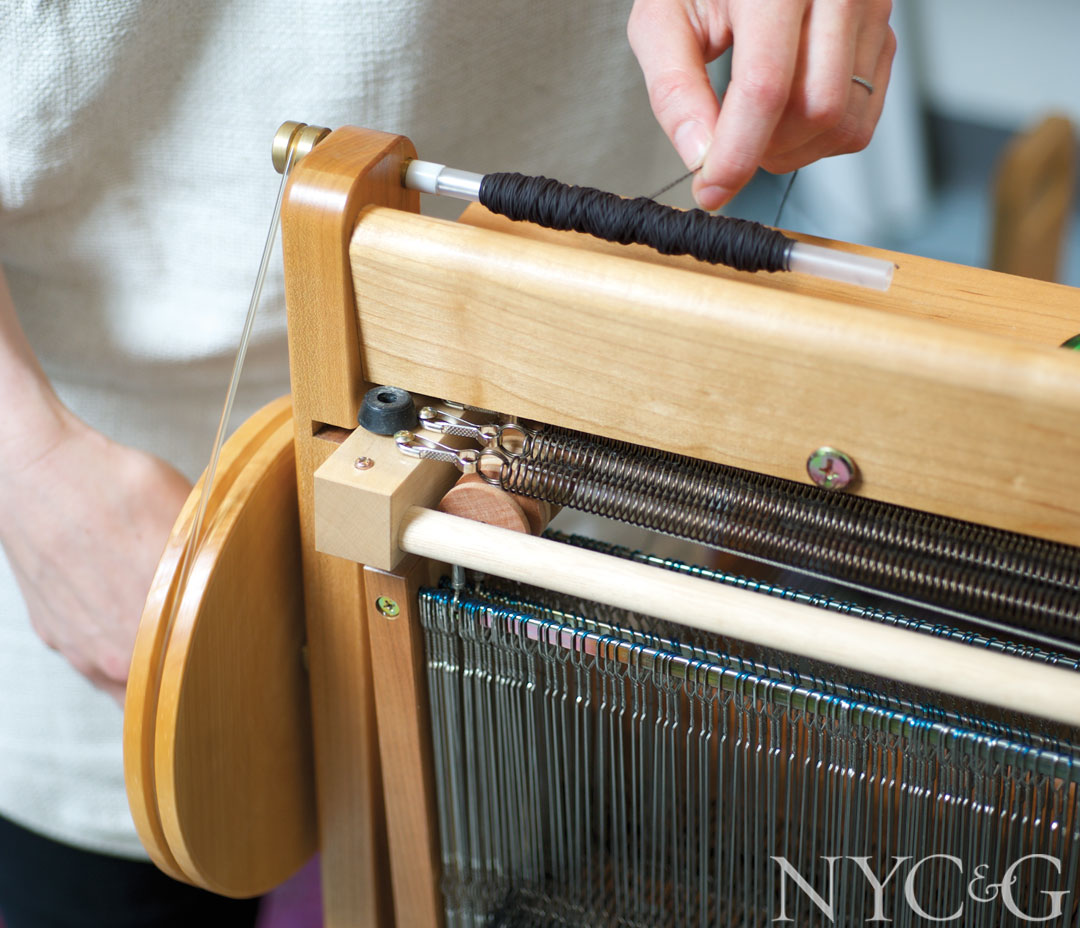 In 2014, her husband, Asher Israelow, a furniture designer, bought her the floor loom, which can accommodate more elaborate projects than a beginner’s loom. Hart Israelow, who is now based in Hudson, New York, soon graduated from making scarves to making pillows, and launched her business shortly thereafter. “People are usually more adventurous when it comes to buying small accessories, like pillows,” she says, “so I have more freedom with my designs.” 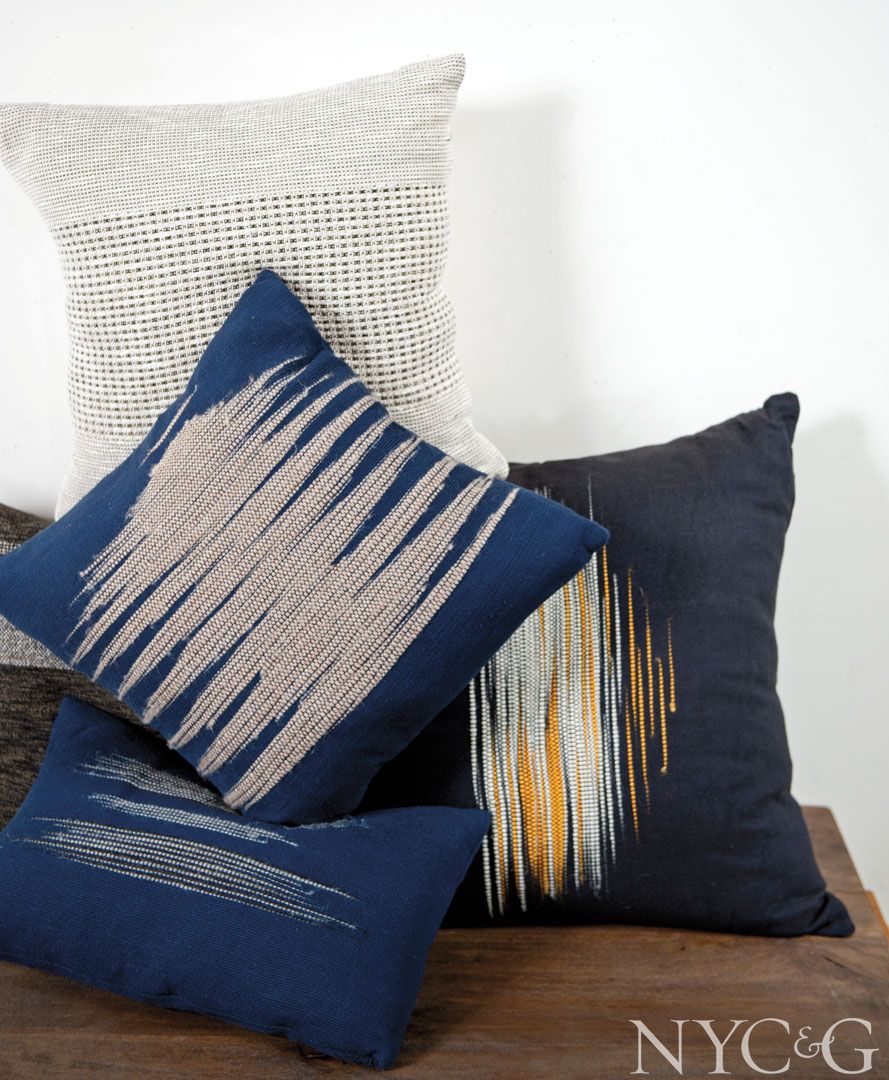 Hart Israelow begins each piece of fabric by selecting a variety of fibers. “I love seeing how different materials interact to create various textures,” she says. Next, she winds the warp, which involves wrapping the thread around a pegged board. (Depending on how much she needs, the process can take more than an hour.) Once complete, Hart Israelow feeds the thread through the loom’s slit-like openings, called reed dents, and then through the rest of the loom until she’s left with a longitudinal bed of hundreds of threads. She hits the machine’s foot pedals, creating a vertical opening in the warp body, known as the shed. With the shed open, Hart Israelow slides a shuttle—a small box that holds the weft, a separate thread that’s often a different color or material—to the other side, where her other hand is waiting to catch it. Before sliding the shuttle back again, she pulls a long wooden bar, the beater bar, toward her to secure the weft in place, producing a latitudinal design.

“I might start a new pattern with an idea in my head, but I never stick to my original plan,” says Hart Israelow, who finishes off each completed piece with a zipper and a pillow insert. “Every pillow cover has a refined background and a contrasting element that pops out of it. To me, that speaks to the rawness of nature, like the way the leaves of a plant unfurl in the spring.”

A version of this article appeared in NYC&G (New York Cottages & Gardens) with the headline: A Well-Spun Tale.