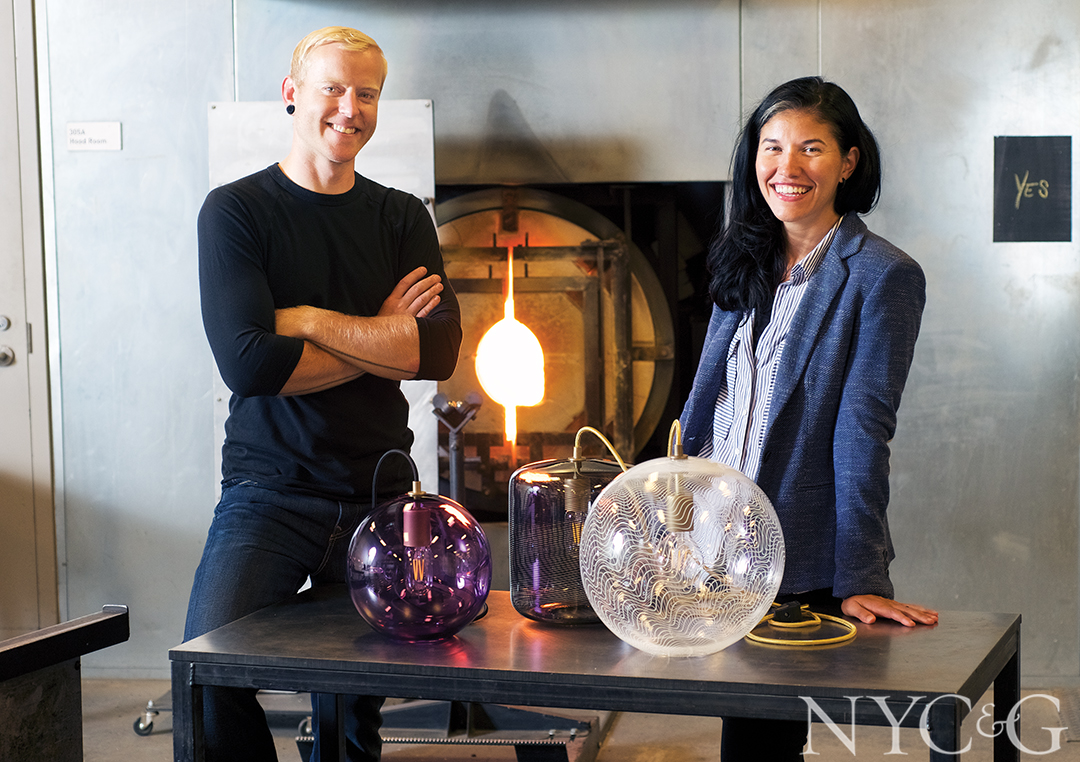 One day in 2000, while attending the Cleveland Institute of Art, Adam Holtzinger decided to check out the school’s glassblowing studio and was immediately entranced. “Once I tried it, I knew it was what I wanted to do,” says the Rhode Island–born Holtzinger, who subsequently switched from photography to glass studies. After more than a decade of producing light fixtures for such brands as Niche Modern and Lindsey Adelman, he decided it was time to bring his own designs to life, and in 2015, he and his wife, Susan Spiranovich, a fellow CIA grad, co-founded the glass lighting company Keep. “I’ve been watching Adam blow glass since he first started,” says Spiranovich, “and I, too, eventually fell in love with the process.”

Holtzinger and Spiranovich assemble Keep’s fixtures at their workshop in Red Hook, but the process kicks off at Fort Greene’s UrbanGlass facility, the country’s largest glassmaking center. To create their Cane Globe pendant, which features a delicate pattern of straight or wavy lines, they start by constructing several colored glass bars, known as cane, which will eventually form the design on the pendant’s exterior. Holtzinger begins by heating a metal rod, known as a punty, and inserting it into a furnace to collect clear molten glass. He adds a layer of colored glass, typically white or black, and then adds another coat of clear glass on top. Next, an assistant attaches a second punty to the glass on Holtzinger’s rod and they walk in opposite directions, stretching the material to nearly 30 feet. After the glass hardens, Holtzinger and Spiranovich use a metal tool to cut the glass into canes. They line up around 60 of these on a ceramic plate and reheat them, which fuses them together and creates a single pliable form. Holtzinger wraps this sheet of cane around a blowpipe with molten glass and rolls it on a metal table until the cane and clear glass are melded together in a pleasing pattern. He then blows it into a tube-like form and uses both shears and a tweezer-like instrument to cut open one end. 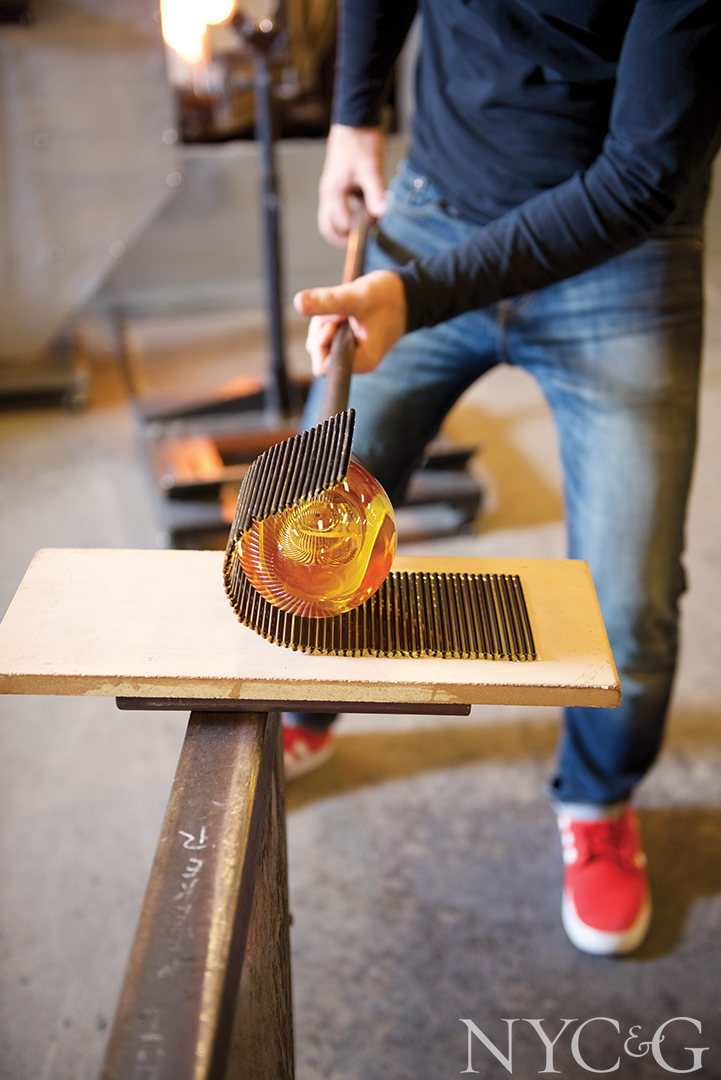 For the next step, Holtzinger attaches a second blowpipe to the open end of the tube-shaped piece. At this point, he cuts the glass in half (he can make two lights with one tube), closes up the openings, and continues working with one portion. The assistant blows into the pipe while Holtzinger continues to shape the inflated glass; once complete, the object is transferred to a punty, from which he expands the opening on the opposite end (this becomes the bottom of the finished piece). Finally, the fixture is placed into an annealer to cool gradually, before it is transferred to the couple’s Red Hook workshop, where they fit it with brass hardware. “The material changes minute to minute, hour to hour, and week to week,” says Holtzinger. “The process never gets old.” 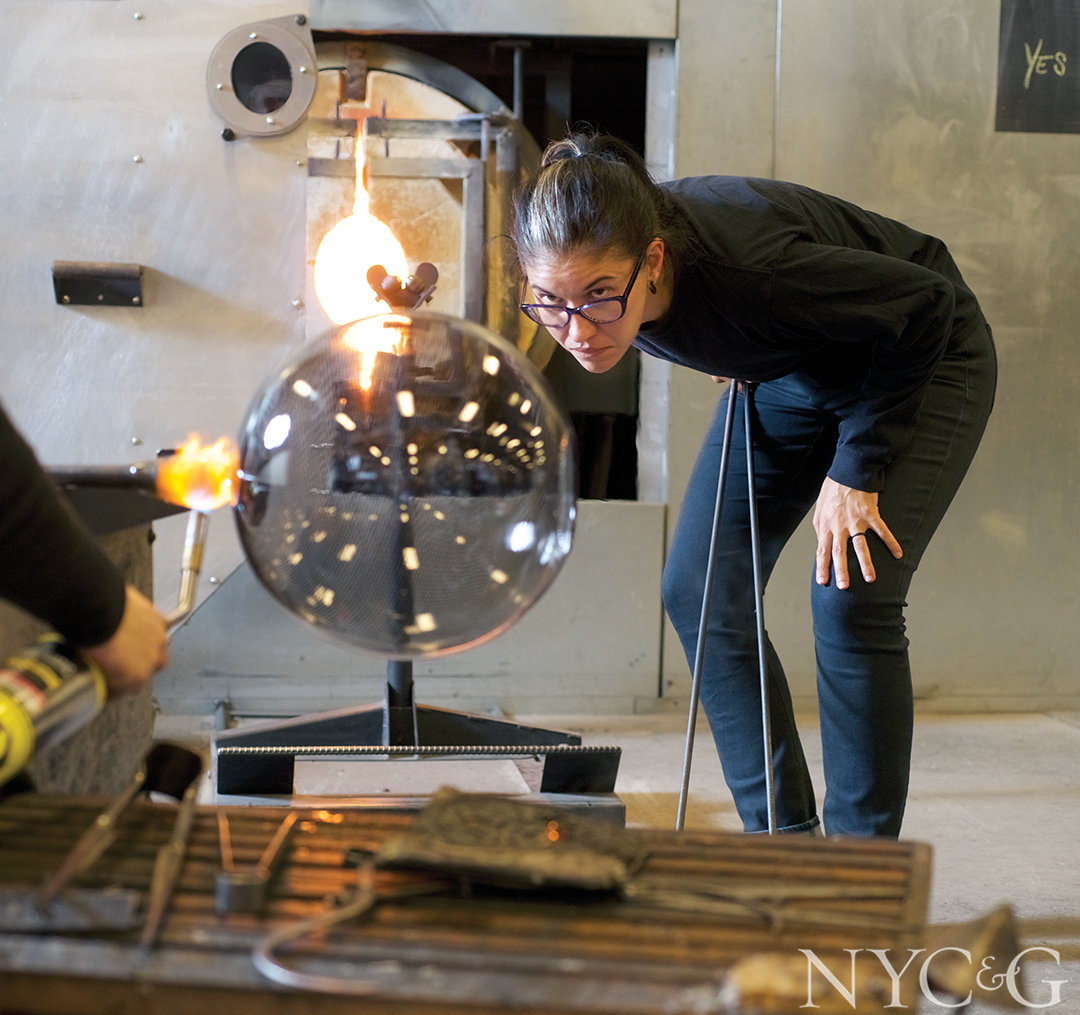 A version of this article appeared in NYC&G (New York Cottages & Gardens) with the headline: Earning Their Keep.