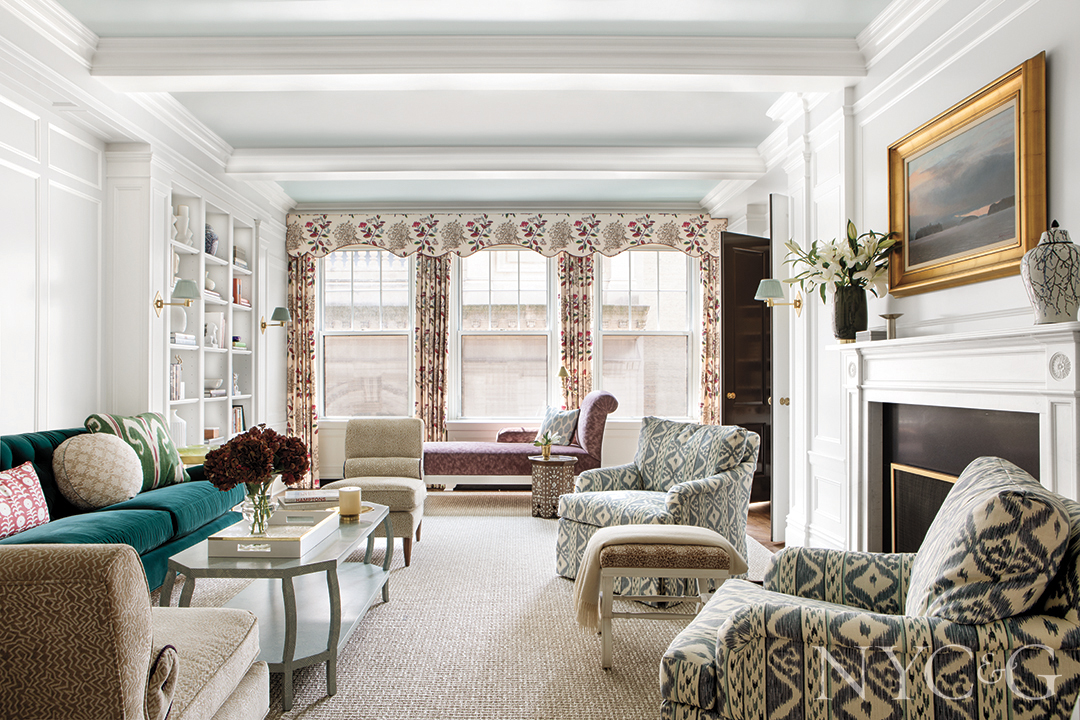 As an undergraduate student at Tulane University in New Orleans, Paige Pierce marveled at the Big Easy’s intricate façades and rich architectural history. She also enjoyed design magazines and appreciated a well-decorated room.

Even so, the California native decided to pursue a career in fashion. A few years later she joined the merchandising team at Diane von Furstenberg in New York, helping to launch the brand’s home line.

That’s when the epiphany struck: She realized she had taken the wrong path. “I loved playing with fabrics, colors, and patterns, but fashion is fleeting,” says Pierce, who enrolled in night classes at Parsons School of Design in 2010. “What’s in one second is out the next. But when you’re decorating a home, you’re working with clients to create something long-lasting, a place where families will spend their quality time together.”

Shortly thereafter, Pierce joined Sara Gilbane Interiors, making her way up to senior designer within four years. “Working in a small office, I got a better understanding of the nitty-gritty side of the business,” Pierce recounts. “Sara taught me that the creative aspect is only a small percentage of being a designer. You spend a lot of time managing clients and billing.”

This Central Park West co-op was completely gutted when Pierce was asked to design the owner’s new digs. The architectural plans by Patrick Gerard Carmody were nearly finalized as well. The clients leaned toward “traditional and preppy,” Pierce says. They desired rooms that could play multiple roles while steering clear of being precious. 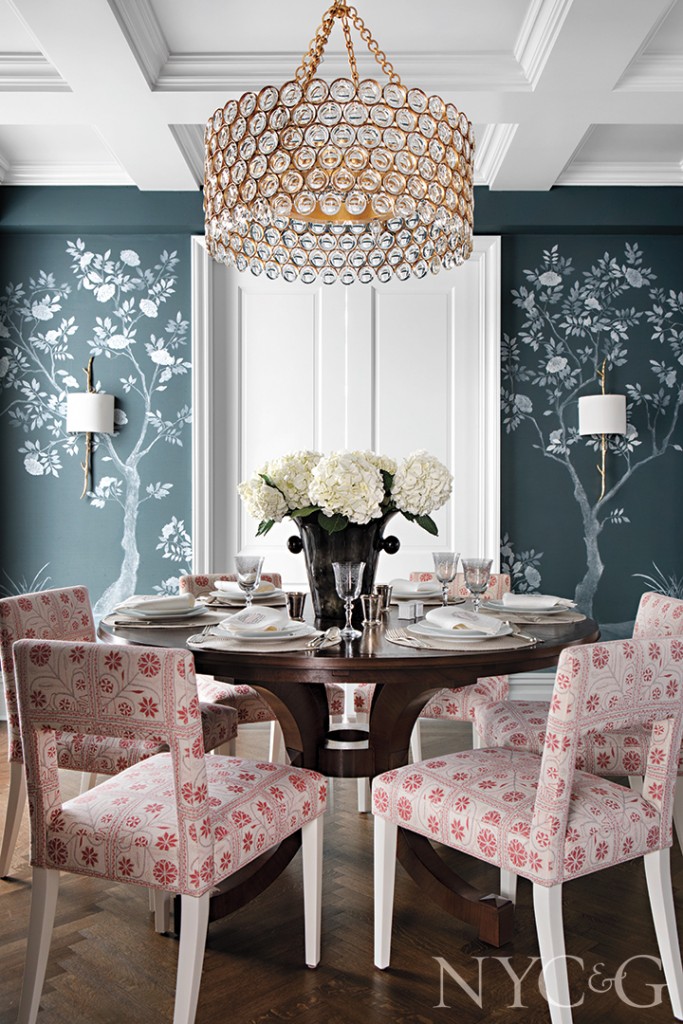 Pierce now resides in Los Angeles, but still understands the importance of multifunctional spaces in New York City. Take the foyer of the co-op: Depending on the day of the week, it doubles as a dining room.

There is an expandable pedestal table that holds court in the center and a brass-and-glass pendant light to add a touch of glamour. The silvery-blue grasscloth on the walls, replete with hand-painted florals, adds further sophistication. Chairs can also be pulled from a nearby games table for additional seating in the spacious co-op. “It’s the heart of the house,” says Pierce, “since it leads to all the other rooms. And given its size, it wouldn’t make sense for people to just pass through it.”

An adjacent family room, meanwhile, acts as a playroom of sorts, thanks to toy storage in a bookcase. The clients initially expressed interest in lacquering the walls, but Pierce feared that they might become scuffed. The compromise: a high-gloss charcoal that mimics lacquer, providing a bold statement visible from the entry. 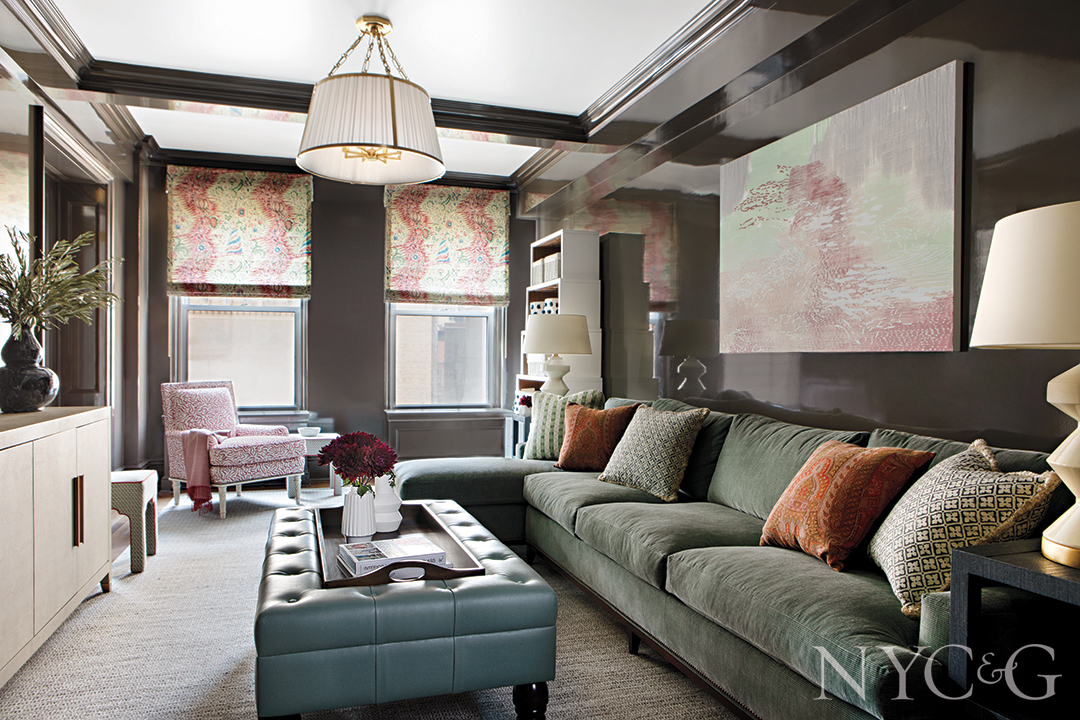 To “make the interiors feel elevated,” Pierce employed custom details in the lavish co-op. In the kitchen, a hand-painted zigzag pattern on a curved banquette wall is framed by a playful chevron trim. The ambient lighting bounces off its waxy finish to add a bit of flare. In the living room, too, high-gloss sky blue on the coffered ceiling reflects light into the room while complementing the soothing palette of blues, violets, and creams. The neatly upholstered seating and valance-lined windows create a more stately atmosphere. However, the space stays modernized with the sisal rug and graphic fabric on a pair of slipper chairs used in contrasting directions. Pierce describes the room as the “most formal in the apartment,” yet still “young and fresh.”

Trim and tailored, yet family-friendly—as a picture of the clients’ kids leaping from the chaise longue proves. “That’s not exactly what I expected to see,” Pierce says with a laugh, “but watching my clients enjoy, and really use, their home is the fun part.”

The print version of this article appeared with the headline: Trad Triumph.
Subscribe to C&G

This article appears in the November/December 2020 issue of NYC&G (New York Cottages & Gardens).