Tour an Eclectic Hacienda in Mexico Brimming with Personality 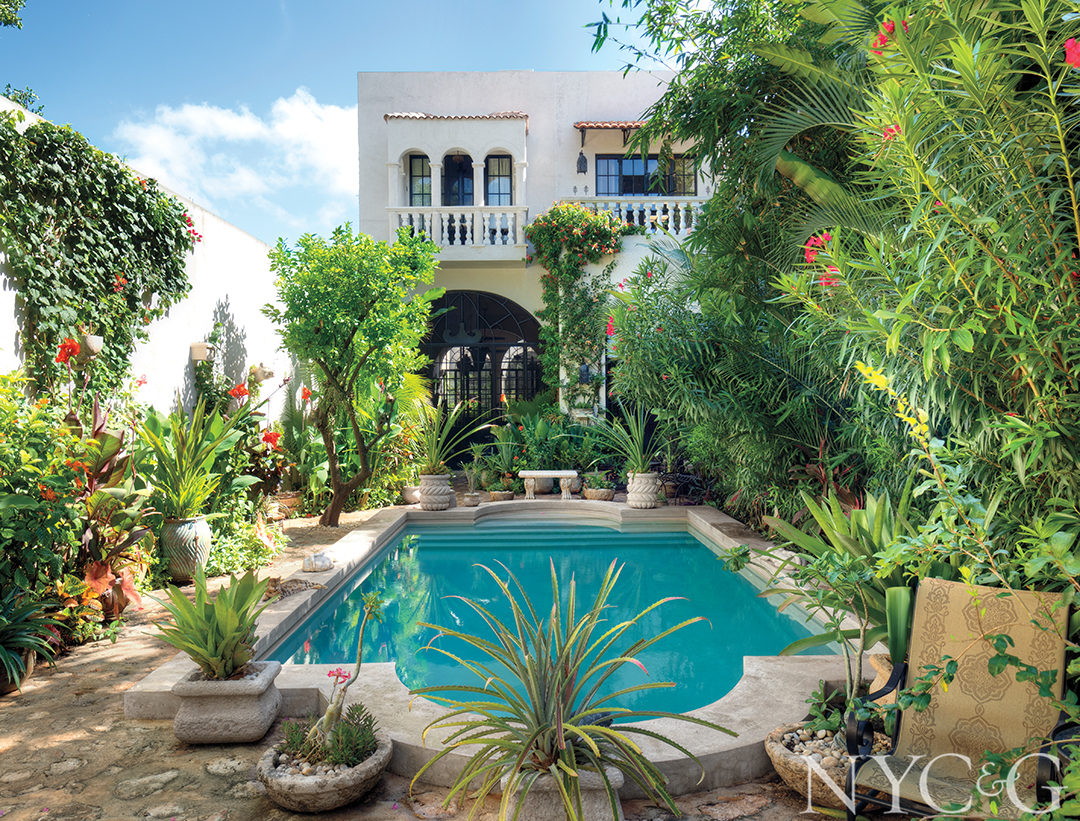 When Lisa Palmer Gaffney was raising her twin sons, now 31, their friends called her apartment on Seventh Avenue and West 58th Street “the museum,” and it’s easy to see why. The “lifelong collector from a family of collectors” loves art and history and has filled all her homes with treasures from around the world. She even signed her boys up for art classes at the Metropolitan Museum of Art, where she would wander through the galleries until it was time to take them home. “We were members of the Met and the Museum of Natural History,” she recalls, “and Central Park was our backyard.”

In 2010, her husband of 39 years, songwriter and music educator Henry Gaffney, passed away, and this creative, energetic woman found herself a widow. A self-styled “rebellious child of the ’60s” who had once co-owned an avant-garde fashion company, she retired from her career as a dealer in 19th-century European art pottery—specifically French, Austrian, and Portuguese ceramics from 1850 to 1905—and in 2013 moved herself and a great many of her most cherished objects to Mérida, Mexico, the capital and largest city of the Yucatán. Among the belongings: a small inlaid table that she bought when she was 20. “I grew up in Brooklyn Heights,” Gaffney recalls, “and at the time, Atlantic Avenue was the center of Lebanese and Syrian culture.” She has lived with the piece ever since.

Gaffney had made her first trip to Mérida in 1983, attracted by the Mayan ruins she still explores today, and became enamored of the city well before it evolved into a hot spot for U.S. expats. “There are so many artists living here now,” she says. “It has become a very sophisticated city, and yet everything is handmade. I love how you can be in the middle of the historic center and still have mature trees looming above your garden wall. Now people are beginning to move here from Mexico City because there’s so much more space.” 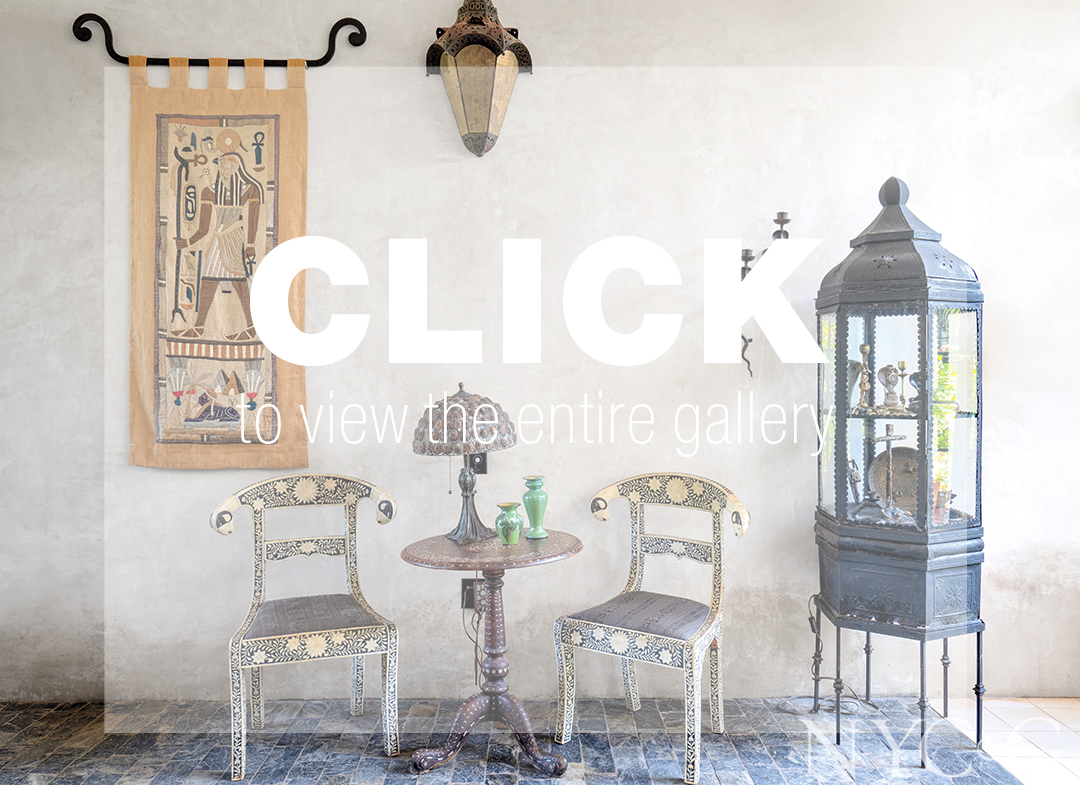 After buying a house, then renovating and selling it, she purchased a second residence in 2016, which she transformed into the expansive hacienda she calls home today. Gaffney’s corner of Mérida (which was founded, she likes to point out, in 1542, “when Henry VIII was king of England”) is a 4,000-square-foot two-story home with a garden about the same size. But it didn’t start out that way. What she bought was a small 1905 house with 17-foot-high beamed ceilings, which became the living and dining rooms. Then she tore down a low-slung cement structure behind it to extend her new home into the generously deep lot, where she put in a pool and created a lush tropical garden. The house now consists of the two formal rooms in front, plus a long galley kitchen adjacent to a central courtyard. Beyond that is a huge screened “covered terrace” with its own living room and breakfast area and the master suite. There are two guest suites and another living room upstairs.

To create a new home that looks hundreds of years old, her architect from Taller Estilo Arquitectura installed a pair of soaring antique doors between the living and dining rooms, which Gaffney had replicated throughout. The polished concrete walls bear “an old, mottled effect from the humidity here,” she says, and the floors are a patchwork of slate and highly ornate concrete tiles made from ancient molds. “I wanted them to suggest area rugs, so the tiles have a custom fringe-like detail on the edge.” The floor in her bathroom is covered in tile salvaged from Mérida’s former governor’s mansion.

As for the furnishings, they fit together like a house party for handcrafts. Here the antique, vintage, reproduced, replicated, repurposed, and just plain new rub up against one another like an intriguing roster of guests under the watchful eye of a veteran host. The Regency “snake mirror” in the living room is antique, but it hangs above a Moroccan-style mirrored shelf made by Evos, a company based in San Miguel de Allende. The silk painting in the master bedroom was handed out as a party favor at Hirohito’s birthday party sometime in the 1920s. Bone-inlay chairs from India are fetching, but “not very comfortable to sit on,” so they’re set off to the side, next to a Mexican tin vitrine that contains Gaffney’s collection of Art Nouveau watch holders. The antique-y ebony chairs in the breakfast area are actually discontinued pieces from Baker, which Gaffney found, painted yellow, at a local thrift shop, and the chairs in the dining room are from her country house in Connecticut, except for one, which she had copied in order to have a set of 12.

Gaffney bought the large Egyptian artworks on the wall (“tourist pieces from the ’20s”) on eBay and then had the iron braces they hang from made locally. The spindle chairs in the living room are circa-1900 Arts and Crafts pieces from Liberty & Co. If Pandora’s box was full of evils, Gaffney’s house is a toy box full of pleasure, each piece replete with its own history and a family story to go with it. Her mother bought the Egyptian daybed at a Parke-Bernet auction back in the day, and the antique leather screen from China was one of her great-grandmother’s treasures. Viennese artist Leo Katz’s portrait of her grandmother, Narcissa Vanderlip, hangs above her bed.

The exteriors are as deeply considered as the interiors, including a shade garden and a sun garden around the magnificent pool. Beds and containers in every corner are planted with palms and bougainvillea, desert roses, bromeliads, angel’s trumpets, and birds of paradise. The aging copper sculpture on one of the garden walls is an architectural shard from the Woolworth Building, one of Manhattan’s earliest skyscrapers. And on the wall separating the two principal garden areas, a fountain burbles beneath a sculpture made by a local stonemason. Depicting jaguars and the tree of life, it provides water for Gaffney’s 13 uncommonly beautiful cats, most of them rescues. “There are so many cats in the world,” muses Gaffney, ever the collector and curator. “If you’re going to adopt them, you might as well adopt the ones that are aesthetically pleasing. I have cat doors everywhere.”

A version of this article appeared in the December 2018 issue of NYC&G (New York Cottages & Gardens) with the headline: Mexican Idyll.