Year End Wrap-Up of the Bests

Looking back at the best events of 2022. 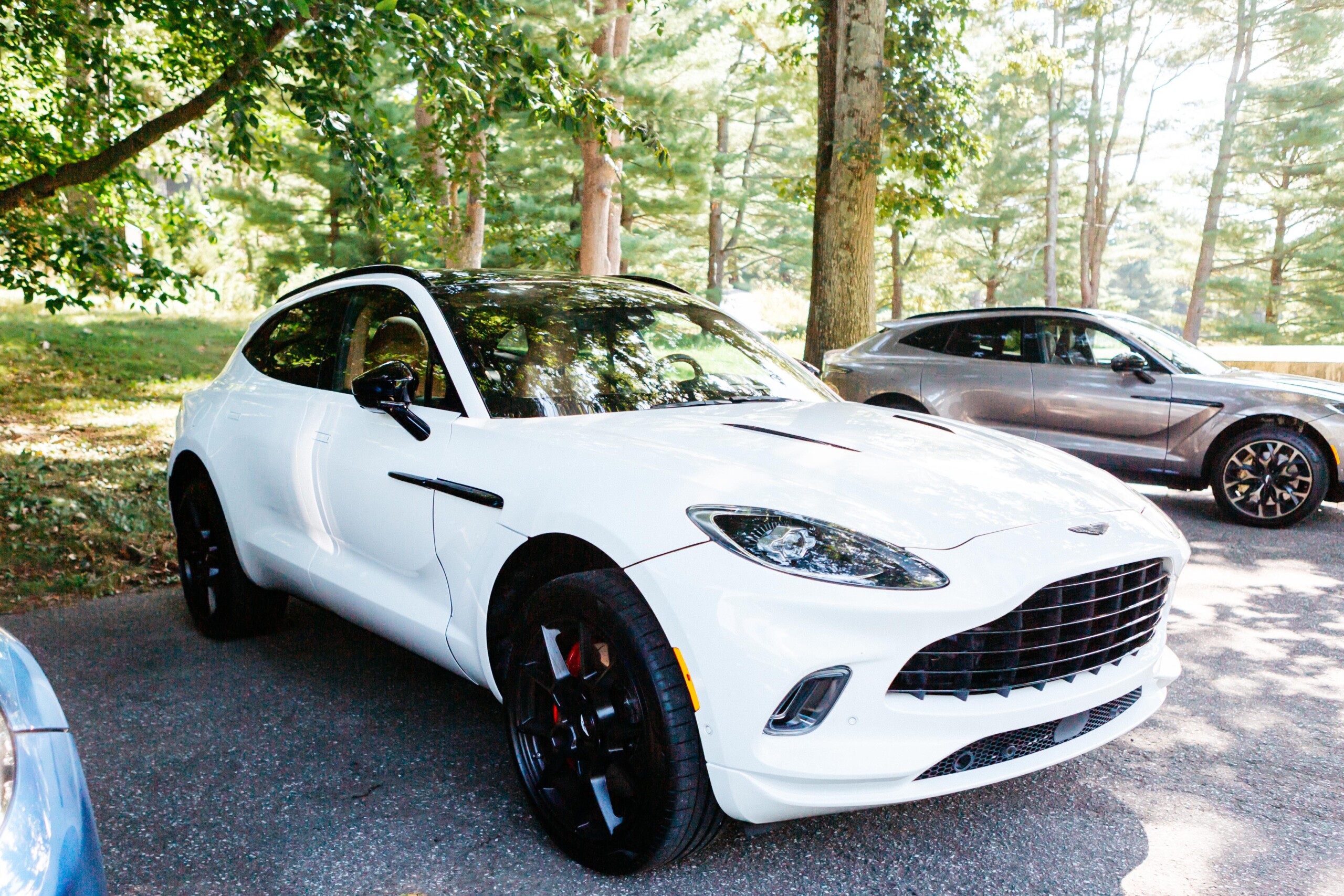 Most food writers keep tallies of the best restaurant meals and their “golden dish awards.” Wine and spirits writers are no different, they keep a list of ah-ha wines and spirits that were off the charts. I usually have those transformative moments at events, so here is a recap of three top events in 2022—the year when the pandemic lifted enough for global winemakers and spirits producers to venture back to New York City. 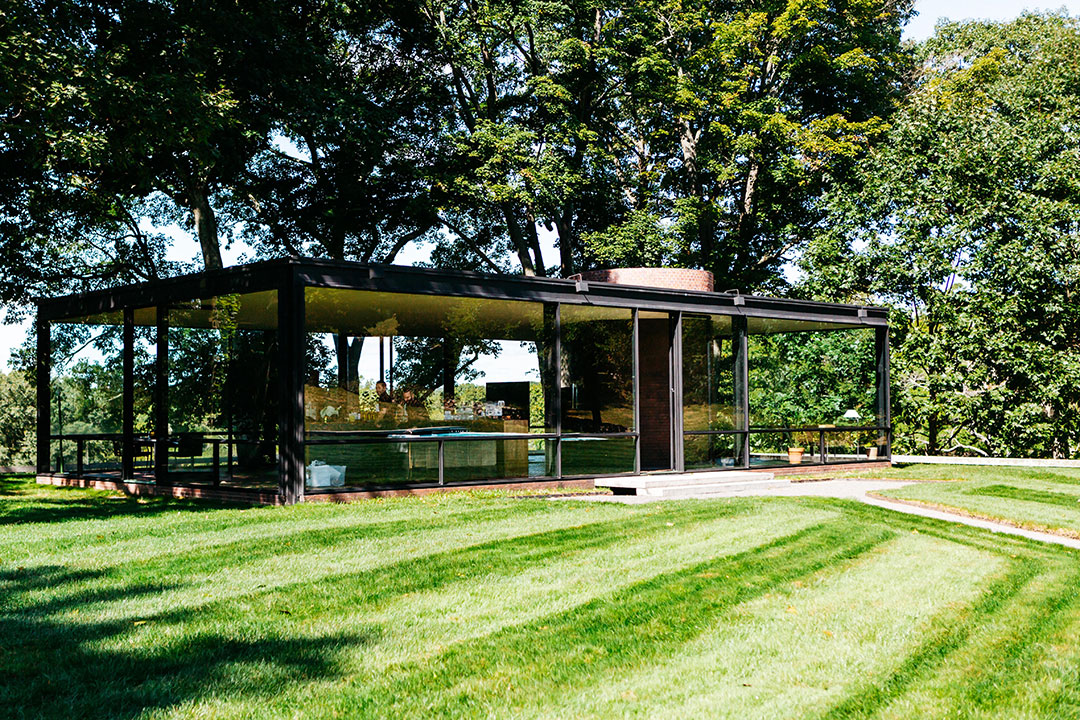 The two and a half centuries old distillery in Islay, Scotland, Bowmore launched an exceptionally rare release of a 52-year-old single malt whisky collectible ($75,000 bottle) in the U.S. with an unsurpassed day trip, an event for a dozen spirits writers. Each writer was picked up at home by a chauffeured Aston Martin DBX and driven to The Glass House, Philip Johnson’s icon in New Canaan, Connecticut, set on forty-nine landscaped acres. Upon our arrival, Bowmore whisky cocktails and paired hors d’oeuvres were served inside The Glass House, which was built between 1949 and 1995 with floor to ceiling glass making up all its exterior walls.

After the cocktail hour, the group was directed onto the grounds and walked over a bridge which led to a cave-like museum space. Here we first witnessed the extraordinary bottle of Bowmore ARC-52, a partnership between Bowmore and Aston Martin, issued in a collectible edition of 100 futuristic decanters for the world. First seen in a museum case, the bottle was designed as a horizontal glass sculpture, which we were informed was meant to invoke the spirit of Aston Martin car design with its balance, heritage, and innovation. The bottle was then removed from the case, and we all gather around to inspect and admire it. The Aston Martin design team had worked on this bottle for years and had created an ingenious closure which requires a magnetic key to unlock. If you lost the key, there was no way to open this sculptural bottle. 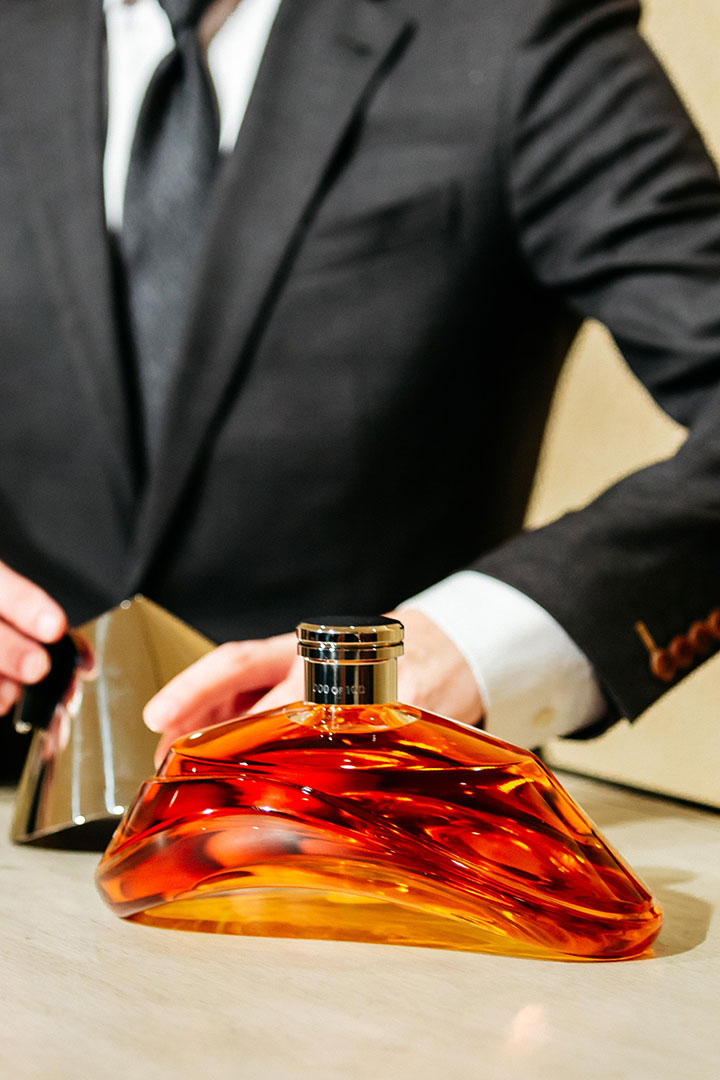 After the reveal, we tasted through a series of Bowmore releases and finally the ARC-52. How did it taste? Here is a much-shortened summary of the official tasting notes from Master Blender, Ron Welsh: “aromas of vanilla, kumquat, mandarin and herbals notes of mint and eucalyptus; flavors of green grapes, peach and clementine, and nutty notes of almond and hazelnut; subtle peat ash and butter character on the finish.” My impression was different, without such distinguishable aromas and flavors. Classic Bowmore is prized for herbal and medicinal flavors with notes of exotic fruits. In ARC-52, those peaty and medicine cabinet flavors were subdued, and the taste was rather indescribable, something remarkably singular. No descriptor would do justice to its unique flavor. Of course, the aging regime was also exacting with the whisky aging in two cask styles—half in American Oak Hogshead and half in European Oak Butt—blended after the 52 years. No doubt it was an historic experience to taste a whisky from 1964, the year when Aston Martin introduced the DB5 as first seen in Goldfinger. 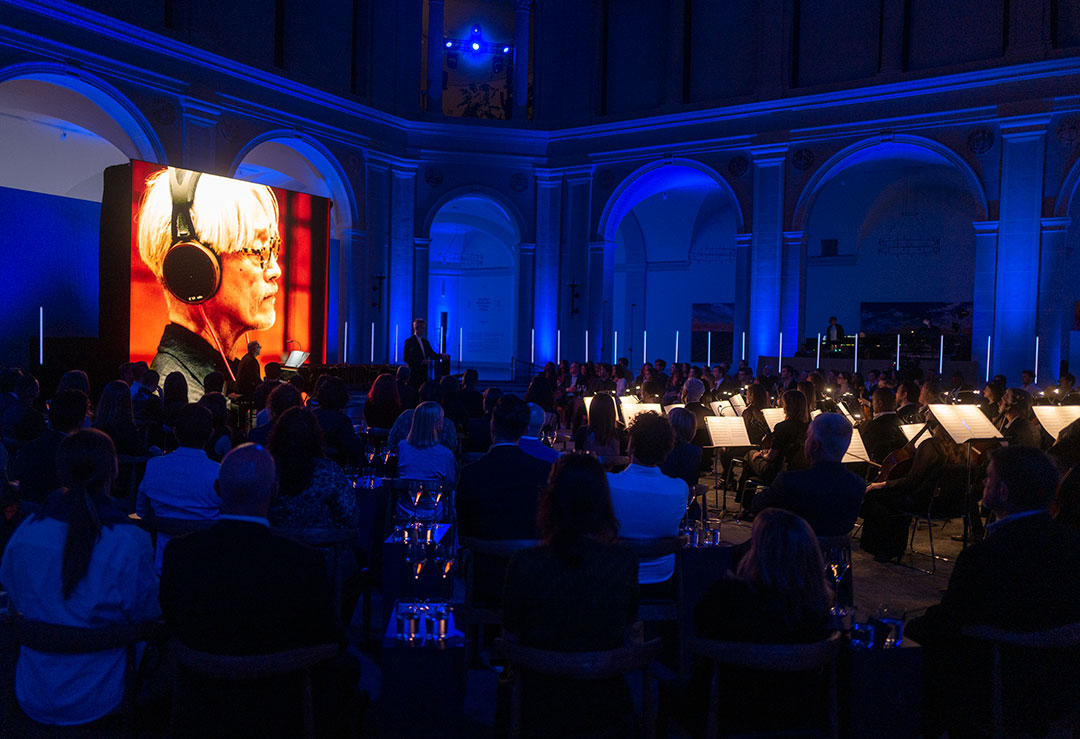 Krug Champagne staged an extravaganza at the Brooklyn Museum, the first of three global premieres of a symphony—later to be performed in London and Tokyo. Krug commissioned the famous Japanese musician and composer—and Academy Award winner for Best Original Score for The Last Emperor (1987)—Ryuichi Sakamoto to create a symphony interpreting three different expressions of Krug, all from the 2008 vintage.

Sakamoto’s “Suite for Krug in 2008” was performed for seventy guests seated in comfortable chairs, each with side tables. The orchestra filed in and took their places in the Beaux-Arts Court, the 10,000 square foot space with its two-story ceilings and dramatic skylight. Before the musician started, Sakamoto appeared on a large screen speaking about how Krug Champagne had inspired him.

In communication with Krug for over 18 months, Sakamoto visited Reims and worked with Cellar Master Julie Cavil, tasting the three champagne expressions from the exceptional vintage year of 2008. His challenge was to translate his perceptions of the tastes into music. The House of Krug has always believed that sound can influence taste perceptions and has done experiments in sound pairing with its cuvées over the years. Krug describes itself as the “symphonic” Champagne, with the taste notes releasing like sections of an symphony orchestra.

As the audience listened to each movement of the Suite for Krug in 2008, servers presented stemmed tulip glasses placing them on individual side table to pair with the symphony—first the Krug Clos du Mesnil 2008 ($1,249), then the Krug 2008 vintage ($349), and the Krug Grande Cuvée 164th Edition ($450). The prices reflect the rarity of this vintage, though the Clos du Mesnil has always been the highest price Champagne along with even more pricey cousin, Krug Clos d’Ambonnay, a single vineyard Pinot Noir.

Pairing music with wine and simultaneously tasting the wine and hearing the sound is a fascinating experience. A light show of colored lights also flashed and changed to the music. The first movement, entitled ‘The Soloist,’ referring Clos du Mesnil, was performed by a soloist. Clos du Mesnil is comparable to a virtuoso soloist because it’s made from one grape, Chardonnay, from the single vineyard Clos du Mesnil in a single year.

The second movement for Krug Vintage 2008, a blend of grapes from different vineyards, was performed by a small ensemble. In his screened presentation, Sakamoto remarked, “I chose an ensemble of violins, cellos and other stringed instruments, but also added woodwinds and percussion for depth.” 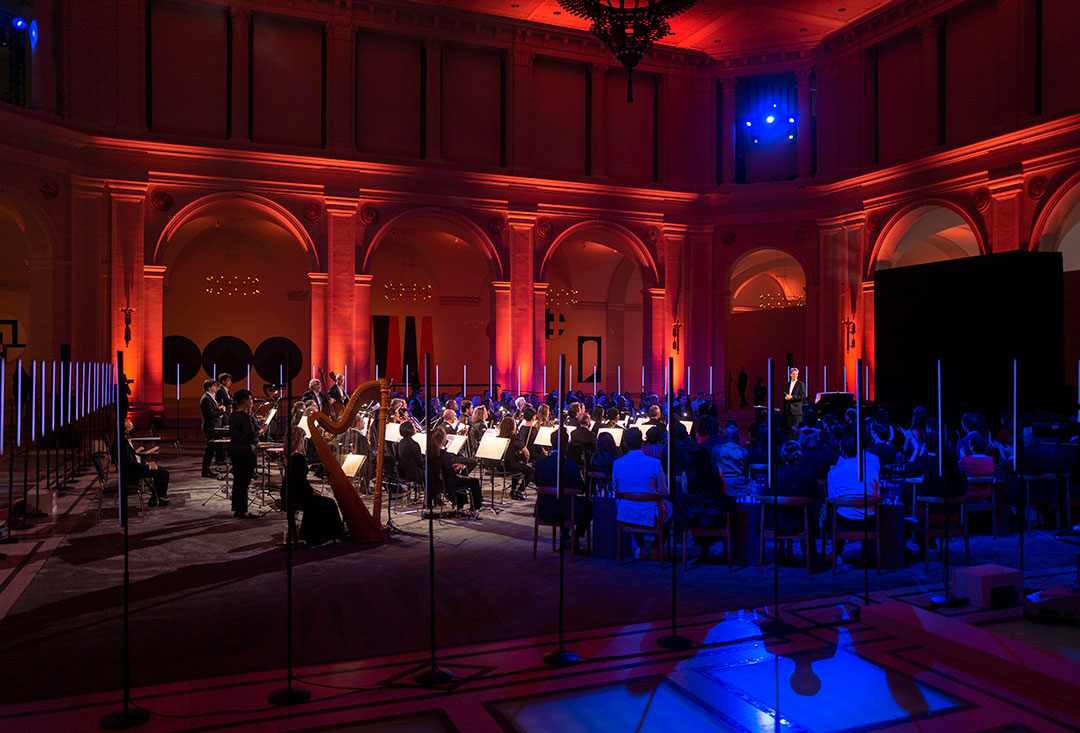 For the final movement interpreting Krug Grande Cuvée 164th Edition, which is a blend of 127 wines from 11 vintages years from 1990—2008, the full symphony orchestra expressed the dynamism, complexity, and generosity of the cuvée.  Cellar Master Julie Cavil and Olivier Krug—family member who continued with Krug as House Director starting in 2009 after the House was acquired  by LVMH in 1999—were both in attendance and were smiling brightly as the audience gave a standing ovation for this extraordinary symphony.

The concert was followed by an extravagant dinner where guests were seated at one impossibly long table. This multisensory immersion experience, entitled Seeing Sound, Hearing Krug, was an unforgettable intellectual exercise in experiencing taste as interpreted by a master composer. When I sipped the 164th edition, the full orchestra continued to play in my head. 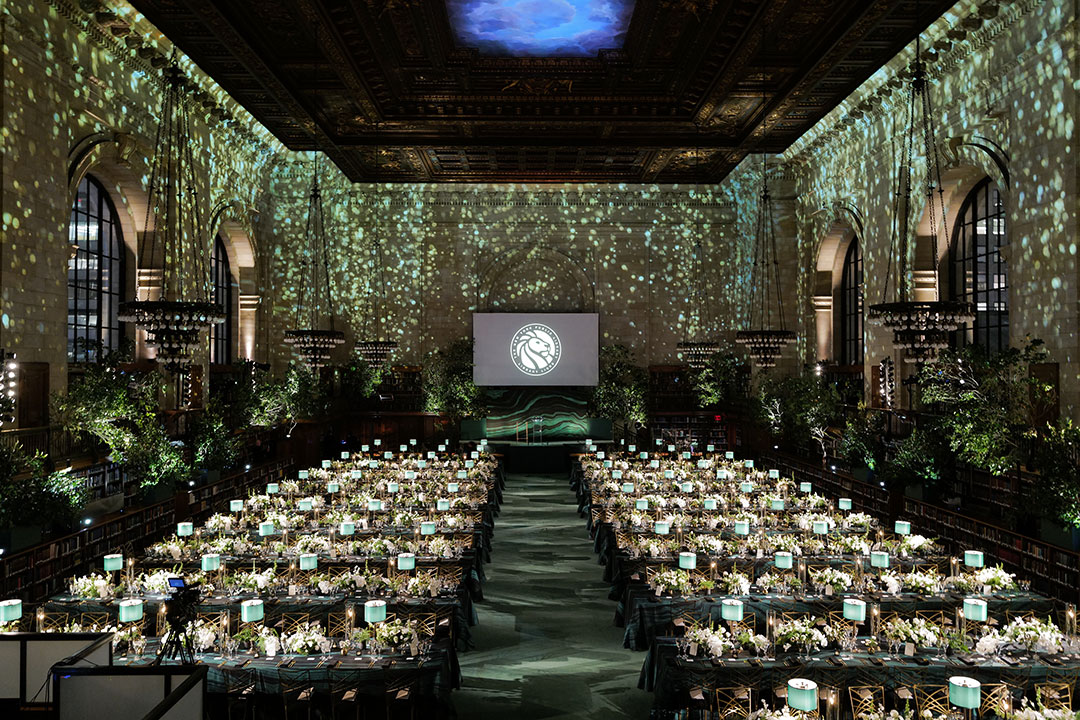 Library Lions at the New York Public Library is one of the city’s and certainly one of my most beloved black-tie charity events for drinking in the intellectual atmosphere. This year was no exception with inductions of some of my favorite creatives: the artist and performer Laurie Anderson; the scholar Dame Mary Beard from the U.K. (with many books on ancient Rome); and Charles Blow, the American journalist and op-ed writer for The New York Times. The other inductees this year were Lynn Nottage, Pulitzer Prize winning playwright, and Amartya Sen, an Indian economist and philosopher working in the U.S. and U.K.

At the start of the event, the guests walked up the outside stairs, flanked by the majestic marble lions, into the library entrance, where a spirited cocktail party kicked off the evening. Chandon Brut from California was the featured bubbly along with a full bar of spirits. After a good hour of arrivals and mixing, the 450 attendees were called to walk up three flights of stairs to the inner sanctum, the newly restored Rose Main Reading Room with its 52-foot-high ceiling and mural skylight depicting blue sky and billowing clouds. As the crowd filed in, a live multi-piece orchestra played, giving the gala a glow with old world charm. This year’s décor was over-the-top with an extraordinary illusion of a waterfall cascading briskly down the four walls. Senator Chuck Schumer gave opening remarks and spoke about his using the library as a child growing up in Brooklyn. He introduced Major Eric Adams, who proclaimed November 7th as New York Library Day in NYC. 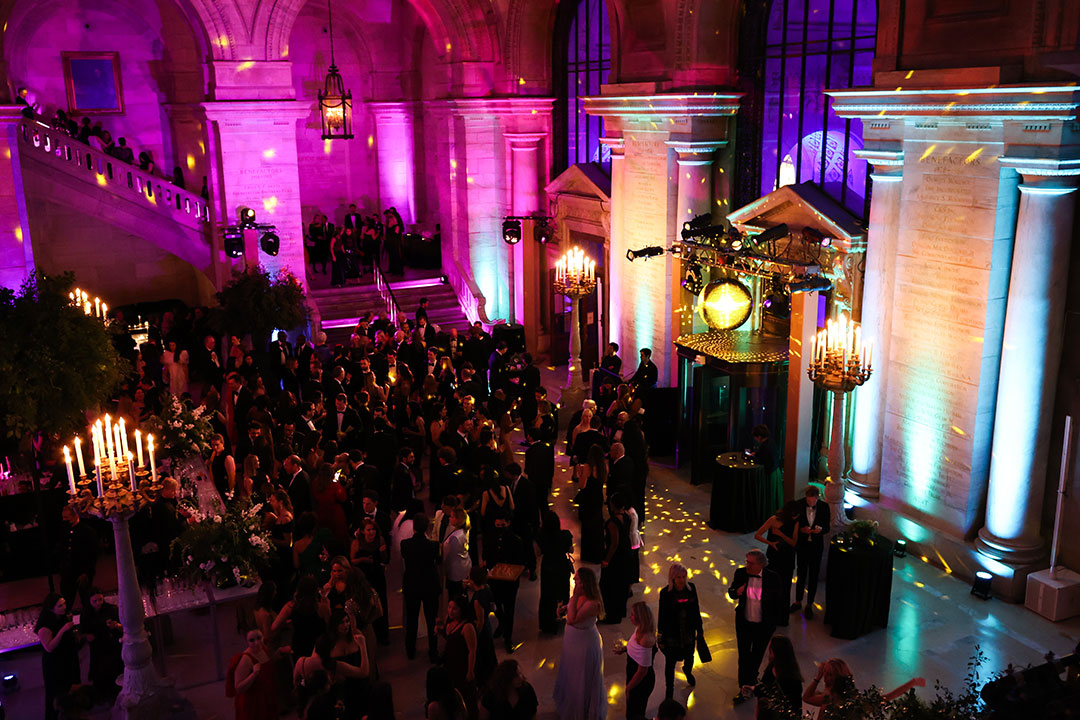 The dinner was served and paired with some impressive wines. The white, Foucher-Lebrun “Le Mont” Sauvignon Blanc, coming from a small négociant specializing in Loire wines, had lovely floral, citrus, and stone aromas with the racy minerality that signifies France’s Sancerre region. The red, Ernesto Catena Tahuan Malbec, from a winery founded by the son of legendary Nicolas Catena Zapata, who is considered the pioneer of the Mendoza region of Argentina. After the induction ceremony, where inductees are given medals attached to a ribbon which they wear around their necks, the crowd descended the stairs to find the Young Lions afterparty in full force with desserts and cocktails and more Chandon. The Young Lions, who purchased the afterparty ticket, socialized madly, and danced till late to DJ Color Love, from Malibu who plays electronic music, which she refers to as tribal tech. All this fun at the Library Lions Gala for a good cause to raise money to support the library’s 92 locations in the city.