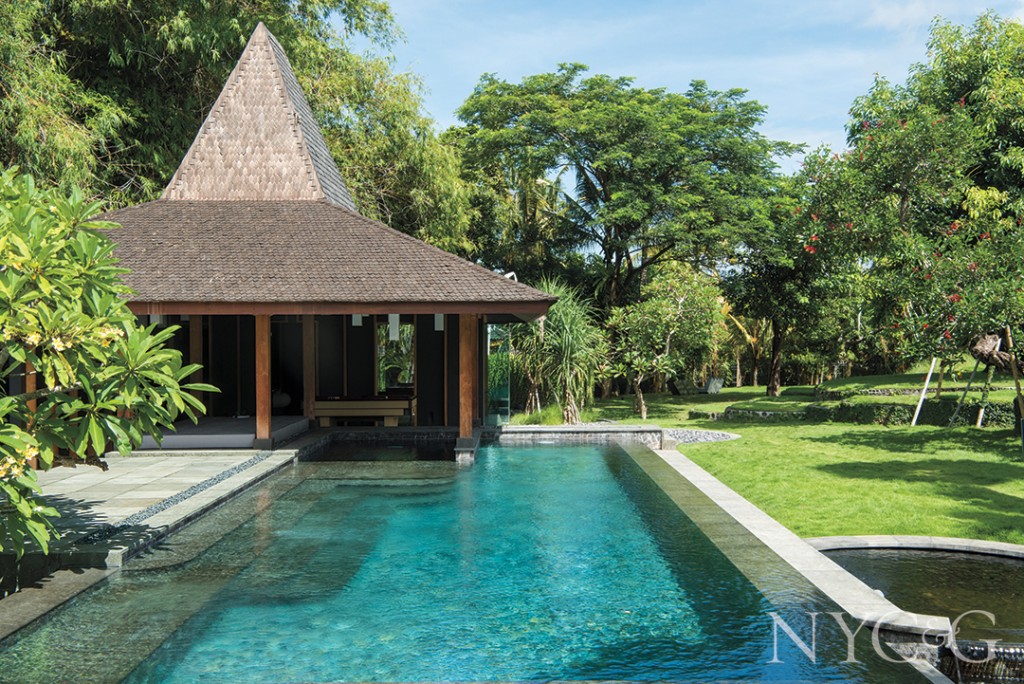 How does one become an expat? If you’re furniture and accessories designer Maximilian Eicke, you start with a postcollege backpacking trip around the world and run out of money somewhere around Singapore—and then, as luck would have it, an old family friend sends an invitation to Bali just in the nick of time. “Bibi Phillips, who once ran a shop called Mata Hari in Sag Harbor, was the one who came to my rescue,” says Eicke, recounting the chain of events that kickstarted his career in 2010.

“When I arrived at her place, she introduced me to her friends Chris Ball and Wayan Lam, who soon became my dear friends as well. Chris has mentored me over the years, guiding me on how to market my designs and manufacture them.” By the end of his first year in Indonesia, Eicke had produced his debut furniture collection and started spending about three months a year on Bali (now nine months), although he continues to summer in Sag Harbor, where he grew up and lived with his family for 21 years.

Geography and nature played major roles in the house’s evolution. The property’s flat terrain, originally a rice field, wasn’t terribly interesting. But then a massive rainstorm drenched the land in 10-foot-high water. Soon enough, Eicke had 450 truckloads of soil brought in to keep future flooding at bay. A more interesting landscape also transpired from the solution.

New terracing and ponds form organic circular shapes that offer sharp contrast against the starkly angular house. “Gardens and nature are why people live on Bali,” Eicke says. “I always find it strange that people often leave the landscaping to the end.” Now the grounds are thickly planted with palms, ferns, and Bodhi trees.

Eicke’s compound comprises a group of structures situated around a central courtyard and pool, including the main house, a pool house, a guesthouse, the kitchen house, and a nearby garage and staff house. “Instead of one massive building,” he says, “I created as many as I could, which allowed me to experiment with materials and styles.” 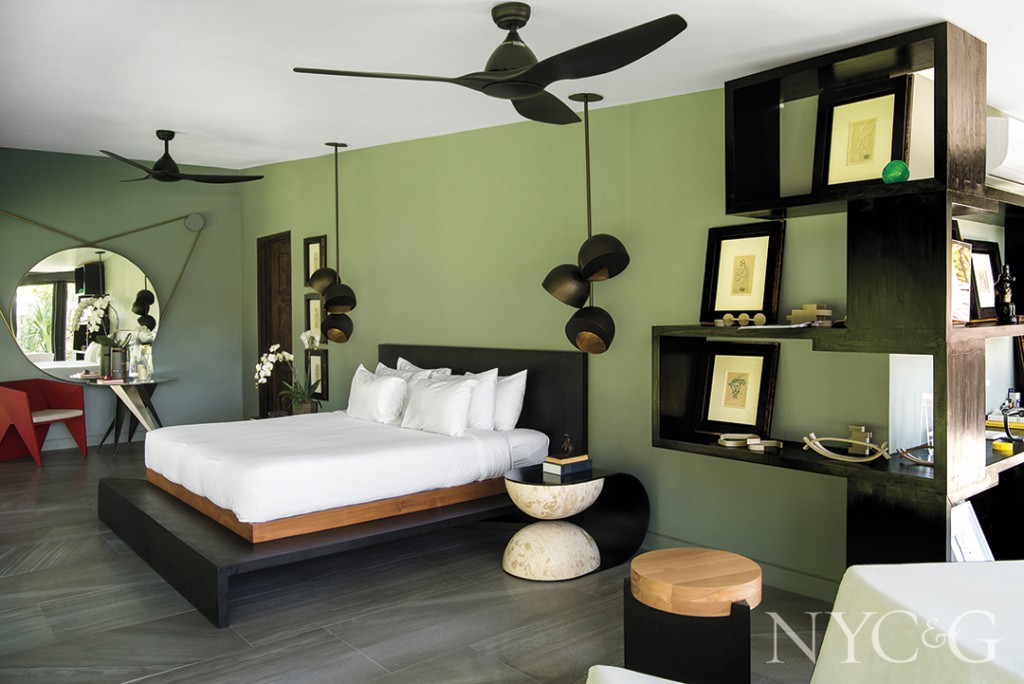 The main house consists of two wings: one side for Eicke and the other for his parents. Open to the elements, the “hinge” connecting the two wings is the main public space. Featuring dining and sunken seating areas, it is perfect for when the family comes together. Durable, weather-resistant materials have been employed throughout, such as a nonslip volcanic rock called andesite, reclaimed ironwood for the floors, and outdoor fabrics for the upholstery.

Each building in the compound has its own personality. They each attest to Eicke’s masterful combination of Eastern and Western influences. The pool house is identified by its joglo roof, a vernacular design popular with aristocratic classes on the neighboring island of Java. Its distinctive peak provides shady shelter even over a portion of the pool. And the guesthouse’s solid concrete walls and expanses of glass reference the pavilion Mies van der Rohe designed for the 1929 International Exposition in Barcelona. The edifice seems almost like an island, with the adjacent pool emptying into the man-made ponds surrounding it. 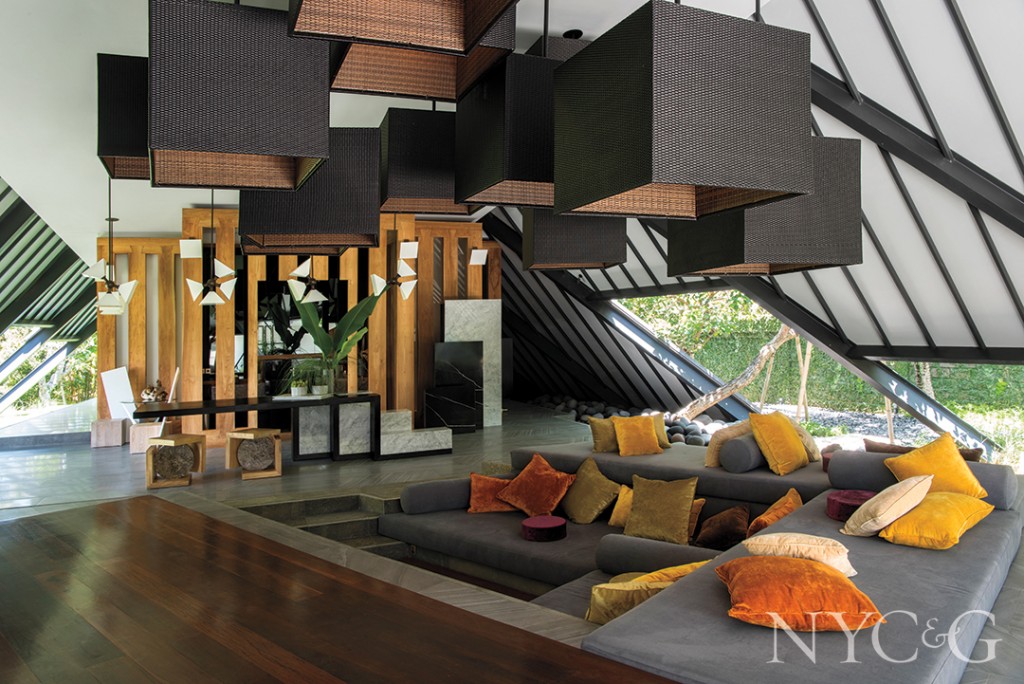 Designer Maximilian Eicke now looks back on the lengthy project with a mix of annoyance and fondness. “Mistakes happen, and you learn from them,” the designer says. He made use of the time during construction to focus on expanding his collection of home accessories, everything from lighting to furniture to cutlery, while creating nearly 100 custom pieces for the Bali abode.

During the building process, countless blessing ceremonies were held. Upon the house’s completion, Eicke’s parents joined him for melaspas. Melaspas is a traditional Balinese ceremony during which a priest blesses the house and gives life back to the elements that were used to construct it. With this ritual cleansing and purification, Eicke came one step closer to satisfying his wanderlust and living like a local.

The print version of this article appears with the headline: Bali High.
Subscribe to C&G

This article appears in the March/April 2021 issue of NYC&G (New York Cottages & Gardens).